“There is soon going to be a mass extinction event for the media (as we know it) – it’s triggered by the spreading of online media, and accelerated by the economic recession. Very few media organisations will survive…”

This sobering prognosis was offered by John Rennie, editor-in-chief of Scientific American during the
6th World Conference of Science Journalists held in London last week.

He added: “Only some very large media organisations and a few really small ones will be able to withstand this mass extinction.”

He then posed the critical question to the several hundred journalists, editors and broadcasters from all over the world: does the rest of us deserve to survive?

He wasn’t so sure – no media organisation, however large or prestigious it may be, and how deep its pockets are, can carry on business as usual amidst this transformative event. In other words, adapt fast – or go the way of the dinosaurs…

It’s probably time for editors to redefine what constitutes science news, he said. “We should move away from the current model of reporting the ‘big paper of the week’.”

Calling such news the ‘low-hanging fruit’, he challenged his peers: “We need to be better than that. Good bloggers can now match us in most of our routine work. So how and where do professional journalists add value?”

We can always depend on Rennie to sum up complex issues in an interesting soundbite or two. My blog post from the previous WCSJ in Melbourne, where he talked (joked) about Vatican condoms and global warming, has drawn consistently high levels of visitor interest since. 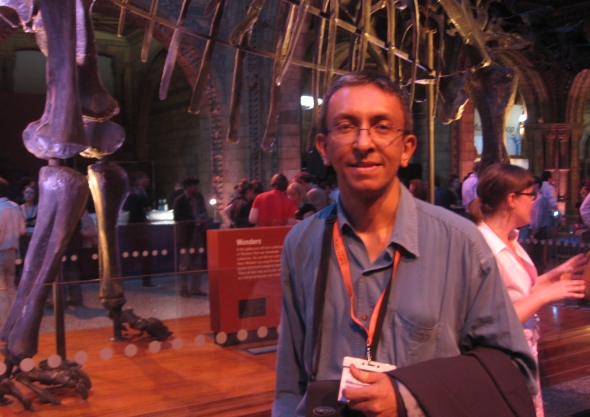 Strangely symbolic? WCSJ 2009 delegates were entertained at London's Natural History Museum...around the skeleton of a Diplodocus!

He didn’t actually use the term ‘mediasaurus’, but clearly his remarks tally with what the American writer Michael Crichton had anticipated as far back as 1993, in a landmark essay titled “Mediasaurus“. In this essay, written for the then newly launched Wired magazine, he prophesied the death of the mass media — specifically the New York Times and the American commercial TV networks.

“To my mind, it is likely that what we now understand as the mass media will be gone within ten years. Vanished, without a trace,” he wrote. Building on his credentials as the author of a best-seller on dinosaurs, Crichton called this endangered beast ‘mediasaurus’.

As later events showed, Crichton foresaw the trend ahead of most people, but didn’t get the timeline right. He was off by a few years — but only a few.

John Rennie is only the seventh editor in chief in the 164-year history of Scientific American magazine. Since his appointment in late 1994, he has been the executive force behind the modernization and reinvigoration of this great publishing institution. So it seems that he is at least trying to prepare his own publication for the coming mass extinction event…

« Why can’t researchers just pay the media to cover their work?
Media extinction postponed in Asia…or last hurrah of ‘mediasaurus’? »
Loading Comments...
%d bloggers like this: