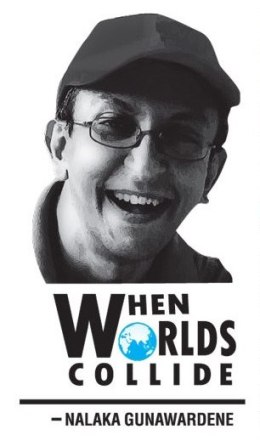 “When Worlds Collide” is one of my favourite phrases: I like to probe what happens when the old meets the new; when cultures intersect; or when arts mixes with science. Also how orthodoxy clashes with modernity.

This is an overarching theme I have been interested in all my lie, and forms the basis of a weekly newspaper column I have been writing from Feb 2012 in the broadsheet newspaper Ceylon Today, published in Sri Lanka.

I scan the whole world and the full range of human endeavours. I don’t like to be trapped within the boundaries of a single country, subject or ideology. I especially like to see what happens when literal and metaphorical ‘worlds collide’ – for example between science and development; or ICTs and society; or technology and public policy; and old or new media. Like when ocean currents meet, this is where the action and ‘riches’ are!

Join me in this exploration!

WHEN WORLDS COLLIDE columns are being archived on a separate dedicated blog, linked to this one.

They are also found online at the newspaper’s own website, sans any weblinks and most images.