Fijian filmmaker and broadcaster Clarence Dass is a star at Asia Media Summit 2013 in Manado, Indonesia, this week.

First, he won the coveted World TV Award in the Science and Environment category, for his futuristic, dramatized film titled “A Day at the Beach” made for and broadcast by Fiji Broadcasting Corporation (FBC) TV.

That earned him US$ 5,000 prize money, a trophy and a certificate – as well as an all expenses paid trip to Manado, where he just collected them in front of 350 broadcast managers and professionals from across Asia Pacific.

To top it up, he then spoke passionately and articulately during a session on taking action for sustainable development: how can media help?

While TV productions are all team work, public speaking is a solo art. Coming last of five panelists and youngest among them, Clarence made the most perceptive and practical remarks of all.

I maybe a bit biased, because he is an alumnus of a regional training workshop on ozone and media issues that I helped conduct in February in Kuala Lumpur. At the end of that workshop, we asked all participants to go home and make short films to enter for this year’s World TV Award.

Clarence would have done well in any case. Now in his early 30s, he has been active in Fiji media since 2001, having started in newspapers as a music journalist, before moving onto radio presenting/producing and then TV production.

He is very digitally savvy, but as his panel remarks showed, also people savvy.

“Today, we have to produce media on-the-go for people who are constantly on the go,” he said. “We have to find ways to bring sustainable development elements into this.”

In “A Day at the Beach”, Clarence imagines a futuristic, climate ravaged Fiji and the Pacific in 2063. A young girl asks: did it have to be this way? Wasn’t there something earlier generations could do?

A bit evocative of The Age of Stupid movie (2009), which I had mentioned during our training. But it’s a universal theme.

Clarence offered some advice from his station’s experience. Key among them is to mix information with entertainment, so as to attract and sustain audiences who are constantly distracted these days.

“As Fiji’s national broadcaster, we provide info-tainment and edu-tainment programmes all the time,” he said.

Other nuggets of wisdom from the amiable Pacific islander:

* Always ask for whom we are creating content. Knowing and profiling our audience is essential.

* We must make our content engaging. We need to find the right level so our programming appeals to both between laymen and experts.

* Beware of using too many effects and gimmicks, which can dilute the message. How much creativity is too much? Every producer has to ask that question.

* Small scale broadcasters in developing countries have to make content interesting on very limited budgets. Funding is a huge issue. But if managed properly, limited funds can still be made to go a long way.

A Day at the Beach Trailer

Some of you have asked to share more information on Truth Talking: Voices from the Waves, the half-hour documentary on climate change and its impact on the South Pacific people that we produced in 2002.

It was the first-ever documentary on climate change and the South Pacific, made by a native Pacific islander (all films till then had been made by visiting foreign film crews). Directed and produced by Bernadette Masianini of Fiji (photo on extreme right below), its story was based on the experience and impressions of two teenagers growing up on two islands, a girl and boy, both facing uncertain futures.

Here’s what I wrote for the Truth Talking book that accompanied the film series.

Dilagi loves her village. Her parents and grandparents, and generations before them, were born and raised in this village. Her family has lived here for centuries, but by the time Dilagi has children of her own, her village might no longer exist.

In Fiji, where Dilagi lives, traditions and cultures are rooted in the home; the village is an integral part of a person’s identity. Like most of the eight million people who live in the Pacific island states, Dilagi’s village is located close to the sea. The bounty of the ocean has long sustained the islanders, but now the same waters have begun to threaten their future. Every year, the shoreline seems to move a little inland, and the beach gets a bit smaller. Before the current century ends, according to scientific projections, many low-lying Pacific islands will go under the rising seas either in part or full – and their histories, traditions and unique cultures will be lost forever.

Dilagi is somewhat aware of this perilous future, but can do nothing about it. The changes in global climate that are causing sea levels to rise and triggering severe storms and cyclones are the result of pollution and environmental degradation generated thousands of miles away in the industrialised world. Says Dilagi: “The villagers cannot understand why the waves are coming on to shore. They think these are signs that the end of the world is near.”

The Pacific contains 22 states, made up of thousands of small islands, with a multitude of cultures and traditions. Diverse as they are, they all share Dilagi and her neighbours’ concerns about the future.

Two thousand and five hundred kilometres north-east of Fiji, sitting on the island of Kiribati, Bernard stares at the same ocean that seems to be lashing out at his tiny island nation with increasing force every year. One of the lowest lying islands in the world, no place on Kiribati is higher than four metres (13 feet).

Building sea walls has provided only a temporary respite against the waves. Not even the grave yards or tombstones are spared. Bernard visits Mrs Saipolua’s house, which she has had to move twice to escape from rising seas. In her backyard, the gravestones of ancestors are being constantly battered by the waves. “Even the final resting places of our loved ones are not spared…the sea action had cracked the gravestones,” she says.

“With our islands being so small, the sea is our biggest resource,” says Bernard. “Over the years, the generations have perfected the ways to use the oceans respectfully for our survival. Ironically, it is the very ocean on which we depend that now threatens us.”

All Pacific islands – including Kiribati and Fiji — have their own unique culture and traditions. They may share the world’s largest ocean and sometimes common ethnicity, but no two island cultures are the same. From the way they collect their food to how they celebrate festivals, their traditions revolve around the geography and natural resources of the islands and the sea.

In this intricate tapestry weaving islands with humans, everything has a place and purpose. For example, the traditional dances entertain and also record the people’s history. Costumes for these dances are produced from plants unique to the Pacific and decorative garlands are made from the brightly coloured flowers. Extreme weather events and climate anomalies that now threaten the environment of these islands may soon drive many plants and animals into extinction. As Bernard asks, “If changes to the climate affect our environment, how long will these aspects of our culture survive?”

For a majority of Pacific island people, climate change is a very real concern that is already impacting them; it’s not a doomsday scenario sometime in the future. Closely linked as they are to their islands and the sea, they just cannot accept relocation in a far away land as a survival option.

“Everything I need in my life is here on this island — my elders, my parents, my friends,” says Bernard. “I cannot imagine life anywhere else, and I cannot imagine that I might have to go and live in another country if my islands are no longer habitable….”

From across the sea, Dilagi agrees: “Our villagers have lived here for hundreds of years. Their traditions and cultures are rooted in this area. They cannot imagine life anywhere else.”

Order this film on DVD or VHS from TVEAP e-shop

Now that scientists have spoken, loud and clear, things are beginning to happen on climate change — and not a moment too soon.

Venture capitalists, policy wonks, technology geeks, security analysts and social activists are all joining the conversation — thanks largely to the media’s increased coverage of the issue.

The threat of climate change is being taken seriously. The past few weeks have seen evidence of this. For example:

– The latest report from the Inter-governmental Panel on Climate Change, released on April 6, said greenhouse gas emissions are at least partly responsible for the warmer climate, which will pose a host of environmental and health challenges, ranging from more diseases to floods and droughts.

– In March 2007, an international panel of scientists presented the United Nations with a sweeping, detailed plan to combat climate change, warning that failure would produce a turbulent 21st century of weather extremes, spreading drought and disease, expanding oceans and displacing coastal populations.

And for the first time ever, the U.N. Security Council will discuss potential threats to international security from climate change.

These conversations will be richer and more meaningful if the ordinary people — who are most at direct risk from climate change’s multiple impacts — were heard in the corridors of power, money and deal-making.

We in the media must see beyond the important scientific projections, policy debates and UN talks — we must look for the human faces, voices and dimensions of climate change.

That’s the point I made in a recent essay published on TVE Asia Pacific website a few weeks ago. Here’s an extract:

A healthy mix of rational thinking and emotional appeal will stand a better chance of moving people to kick their addition to oil.

Allowing real people to tell their own personal experiences can also be very effective. I realised this five years ago, when we commissioned the first-ever documentary on climate change and the South Pacific, made by a native Pacific islander. Voices from the Waves, directed and produced by Bernadette Masianini of Fiji, was narrated by two teenagers growing up on two islands, each facing an uncertain future.

At one point we meet Mrs Saipolua, an ordinary woman who lives on the island of Kiribati, where no place is higher than a few feet above the sea. She is distressed having had to move her home twice in a past decade due to the receding shoreline.
For Kiribati’s 82,000 inhabitants, climate change is not theory; it’s already lashing on their beaches.

“Our house used to be in that spot,” Mrs Saipolua points to a place that’s now permanently submerged. “This is where we relocated to the second time.” 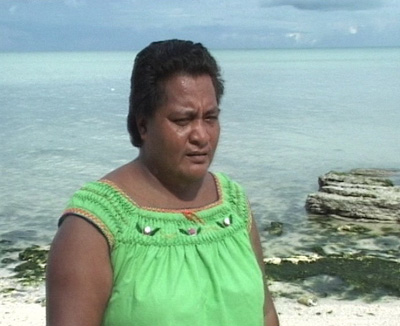 She points to several tombstones that are on the verge of being washed away. “Even the final resting places of our loved ones are not spared…..The sea action had cracked the gravestones.”

I’ve covered climate change for years as a science writer. But it was Mrs Saipolua who made me realise the impact climate change is having on millions of ordinary people who have never heard that term.

Watch a video clip from Voices from the Waves on TVEAP’s YouTube Channel:

Video and DVD copies of Voices from the Waves can be ordered from TVE Asia Pacific’s online e-shop.