Are you normal? Then see your doctor immediately!

Last week I wrote about Bizarro’s wonderfully perceptive cartoon on switching off your brain cells.

This is another one from this sharp-shooting Bizarro creator. I don’t need to say anything more — the cartoon speaks for itself.

In admiration and awe, all I can say is: I wish I’d thought of these first!

Bizarro: Turn off your brain cells before the screening!

A candid request from the management...

We’re all familiar with the request at cinemas, theatres and concert halls for everyone to turn off their cell phones (a.k.a. mobiles) before the show starts. Not that everyone complies — there are enough deviants among us who just can’t disengage themselves from their electronic leashes even for a couple of hours.

But here’s a new twist to that common (and much needed) request: I came across this in the Bizarro cartoon, which offers some fascinating insights into our topsy turvy times. There are times when I feel that every TV set should come with this line printed on top!

Everyone has a story about cell phones going off at the wrong time in the wrong place. Here’s my favourite.

Together with my TVEAP team, I was running the 2004 AIDS Film Festival in Bangkok, Thailand, during the 15th International AIDS Conference, in July 2004. The festival was held across three venues, and showcased over 50 film titles from around the world — we had nearly half the film makers turning up in person to be introduce their films.

One such film maker, an academic turned film maker, was eagerly talking about his film (an excellent one, unusual for academics) when somebody’s cell phone went off.

The film maker wasn’t amused. He told the full house: “Unless you’re a person with nuclear trigger responsibility, can everyone PLEASE turn off their cell phones?”

But the cell phone ring continued, getting louder.

It took a full minute for its owner to be found — who turned out to be our speaker himself! His own cell phone had been ringing in his trouser pocket all this time, disrupting his own talk.

Moral of the story: Turn off your cell phone at a public performance, especially if it’s your own performance!

Exploring our crowded planet, One Square Mile at a time… 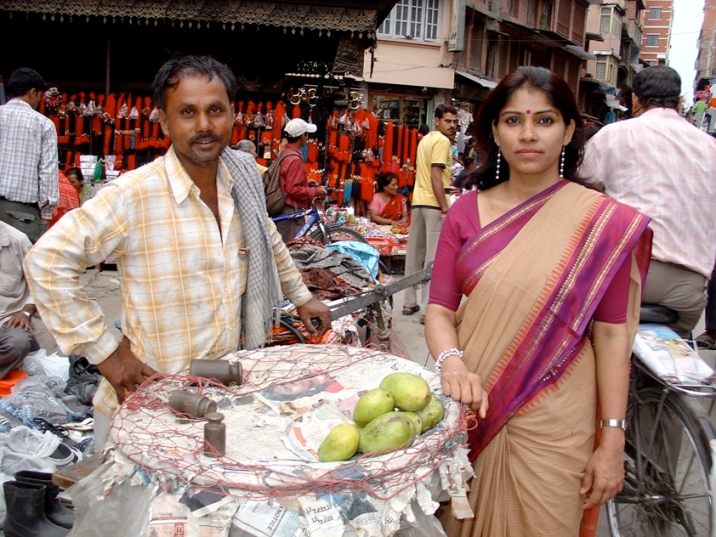 It’s funny how, more than a generation after most of the world adopted the metric system of measurements, relics of the earlier, ‘imperial’ units still linger in our language and popular culture.

Frequent flyers stlll accumulate air-miles, not kilometres. Disaster managers grapple with the challenges of communicating credible early warnings on that the crucial ‘last mile’ (it’s not yet the ‘last kilometre’). And many among us, including those who have grown up in a metric world, can better grasp a square mile than a square kilometre.

One Square Mile is also the name of an interesting new TV series produced by One Planet Pictures of the UK, and first airing this month on BBC World News. In this series, reporters visit a neighbourhood in different parts of the developing world and try and find out what the residents’ hopes and aspirations

Says its producer Robert Lamb: “One Square Mile is an experiment. So much in television is set up. In this series our reporters explore a small patch of a city with the aim of providing the viewer with an authentic slice of life.”

According to Robert, One Square Mile takes the lid off a neighbourhood. Reporters wander around a marked out section of a town and city and talk to the people they meet to find out what their everyday concerns are.

Of this months shows, two are presented by Zeinab Badawi . In one, she goes walkabout in Juba, capital of south Sudan which is on the verge of becoming an independent state. In the other, Badawi encounters murder on the streets in Guatemala City.

The other two are presented by my friend Vasanthi Hariprakash, whose day job is with India’s leading TV news network NDTV. These two are of particular interest to me as she travels to countries in Asia that are closer to me in distance and closer to my heart.

In one show, Vasanthi travels to Kathmandu, the capital of Nepal. The blurb says: “Despite a recent record of political instability that has seen a monarchy overthrown and an uneasy peace struck with the Maoist insurgents, reporter Vasanthi Hariprakash finds a city population surprisingly upbeat. But a long dawn queue outside the passport office tells a different story – young Nepali men are desperate to get out to find work in the Gulf and Southeast Asia.”

I’m familiar with that city having made multiple visits since 1995, and have shared the pains and anxieties of my Nepali friends as they went through political turmoil and a bloody insurgency. I saluted them when their ‘people power’ got rid of the despotic king in 2006.

Vasanthi did remarkably well in presenting her first-time appearance on a BBC-broadcast show. She came across as informed, eager and empathetic to the people and place she was exploring. Not once did I notice a hint of cynicism or condescension in her voice. This is quite in contrast to regular BBC reporters, many of who are far too judgemental and dismissive than good journalists should ever be. We can only hope vasanthi never aspires to those despicable professional levels…

Amidst political intrigue and uncertainties, life goes on in Kathmandu...

In her second show, Vasanthi travels to a small village in Laos next to the old Ho Chi Minh trail where the dominant concern is unexploded cluster bombs from the Vietnam war. The synopsis reads: “From the capital Vientiane it takes 10 hours for reporter Vasanthi Hariprakash to reach her square mile – a village next to the old Ho Chi Minh trail. Today it’s a peaceful highway for enterprising Vietnamese traders but during the war it was a target for the B 52 bombers with their deadly cargo of cluster bombs. 40% are live – called UXOs – Unexploded Ordinance – and Hariprakesh finds the villagers’ poverty leaves them no choice but to run the gauntlet of the unexploded munitions as they work in their paddy fields.”

This reminds me of a short film I saw in Cambodia many years ago about a poor, rural community who faced a similar dilemma living and working in a countryside littered with unknown and unexploded landmines. The Cold War conflicts in Southeast Asia may have ended decades ago, but local people still live in the shadow of their deadly legacies…

I can’t wait for more real-life stories in One Square Mile, and I hope Robert Lamb will send out his intrepid and charming reporters to far corners of the real world where real people are taking on life’s many challenges 24/7. These people’s resilience and resourcefulness inspire us all.

And that’s what good television is all about. Moving images, moving us all!