Cartooning on climate change: Young artists rise to the challenge

Man-made climate change is a complex planetary phenomenon. It has multiple causes and effects – not all of it immediately evident. Different areas of the world are going to be impacted differently and unevenly. Human response to the climate challenge has been patchy, and is mired in so much denial, rhetoric and political posturing.

So how do we capture this multiplicity in visual forms? Photographers go for the evidence and authenticity. Film makers work on both current impacts and future scenarios. What about cartoonists – who have to do their visual metaphors in a limited space that is static and two-dimensional? How much of climate change’s nuance and complexity can they really grasp and convey?

The short answer is: a great deal. On this blog, I’ve written that when it comes to cartoons, less is definitely more. Take, for example, many millions of printed words and probably thousands of minutes of airtime generated around the (over-hyped and under-performing) Copenhagen climate conference in Dec 2009. As I noted in blog posts on 17 Dec, 18 Dec and 21 Dec 2009, it was assorted cartoonists from around the world who summed it all up in a few perceptive strokes. This is why I keep saying that when it comes to commenting on our topsy-turvy times, no one can beat cartoonists for their economy of words.

In late 2009, the British Council and the Ken Sprague Fund of UK organised a cartoon contest on climate change which was open to all Lankan citizens from 18 to 35 years. They offered attractive prizes for anyone who could be ‘seriously funny’ about this global crisis. The participants could submit entries under 6 themes: drought and water shortage; deforestation and rain forest destruction; melting of the ice caps; role of industry in polluting the atmosphere; devastation of our seas and disappearance of marine life; and climate change in an urban environment.

Some 400 entries were received from 175 contestants (each person could submit up to 5 entries) – which surprised and delighted the organisers. During the past few weeks, I have been involved in judging these cartoons to select the top winners and commended entries. Joining me in this enjoyable task were nationally recognised professional cartoonist Wasantha Siriwardena and environmentalist Nimal Perera. We worked with a British counterpart, top cartoonist Michal Boncza Ozdowski.

The winners were announced, with awards and certificates, on 6 March 2010. It coincided with a half-day workshop on cartooning conducted by Michal and Wasantha. The chief guest at the ceremony was Camillus Perera, the seniormost Lankan cartoonist still professionally active.

As national judges, we looked at close to 200 cartoon entries that conformed with the contest’s published rules for eligibility. Since comparative ranking of creative works is never easy, we first agreed on four criteria for assessing the very diverse entries: cartoon value and humour; subject relevance to climate change (defined broadly); how effectively the climate related message was being communicated; and clarity and artistic merit of the entry.

Our initial judging coincided with the climate circus in Copenhagen, when we narrowed it down to a shortlist of 40 entries. We then individually scored these cartoons for each of our four criteria. We sometimes had to discuss and demarcate how far the scope of the contest could stretch. For example, when is an entry a good work of art but not a cartoon (more like a poster)? And what are the acceptable limits in the thematic or subject coverage of a vast topic like climate change?

The British Council later shared the full shortlist with Michal Ozdowski, who provided his own rankings and comments. We met again in February 2010 to discuss and reconcile our rankings — and found that our separately done rankings broadly agreed! (Note: During this entire judging process, the identity of artists was withheld and we only knew each entry by a number. In fact, we judges discovered the names only on the day of the awards ceremony, to which all shortlisted contestants were invited.)

Additionally, Michal kindly offered crisp comments about the top three winners, which became citations at the awards ceremony. So here are the winners of climate change cartoon contest 2009:

First prize: Welcome to the North Pole! By by Shamanthi Rajasingham 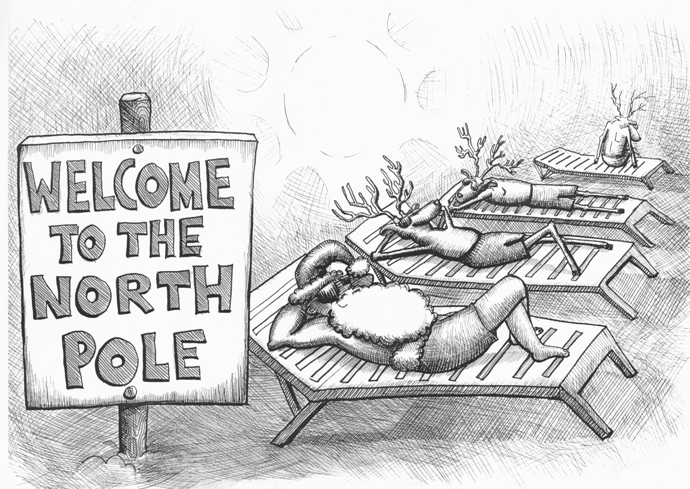 Citation for first prize: It is uncomplicated – a great advantage when satirising. Its composition is strong and imaginative, the draughtsmanship confident.

Second Prize: “I pray for water, not nectar” by Dileepa Dolawatte

Citation for second prize: Apart from the vibrant and highly accomplished draughtsmanship, it lampoons brilliantly the fairy’s naivety – a funny eye-opener. Incorporates very cleverly traditional beliefs and myths. Here we are truly past the dodgy miracles stage in the climate change battles…

Citation for third prize: An eloquent, if over-didactic, strip cartoon – could be quite effective in women’s publications. Coherent draughtsmanship catalogues effectively the woes of a ‘get-rich-quick’ development.

See all the highly commended and commended entries on the British Council website.

2 Responses to “Cartooning on climate change: Young artists rise to the challenge”

« Long Live Siribiris – and his creator Camillus Perera!
Afghan boy with a plant: Reza Deghati on nurturing a culture of peace »
Loading Comments...
%d bloggers like this: