In January 2009, writing a tearful farewell to the slain newspaper editor and investigative journalist Lasantha Wickrematunga, I invoked the memory of Siribiris. I wrote: Goodbye, Lasantha – and long live Siribiris!

Last weekend, I finally met the ‘father of Siribiris’ and was delighted to salute him in public.

Let me explain. Siribiris is an iconic cartoon character well known to two generations of Lankan newspaper readers. He is a creation of Camillus Perera, a veteran Lankan political cartoonist who has been in this uncommon profession for nearly 45 years.

Camillus started drawing cartoons in newspapers in 1966 with the Observer newspaper and the film magazine of the same publishing group, Lake House (then privately owned and under state control since 1973). He draws pocket cartoons, political cartoons as well as satirical comic strips. His most enduring accomplishment has been the creation of a set of regular characters who have developed a loyal following over the years. Among them are the wily Siribiris, prankster Gajaman, fashionable young lady Dekkoth Pathmawathie, smart alec kid Tikka and sporty Sellan Sena.

These and other characters are very ordinary and very real, and they inhabit an undefined yet familiar place in the cartoon universe that most Lankan newspaper readers can easily relate to — it’s a bit like R K Narayan’s fictitious village of Malgudi. 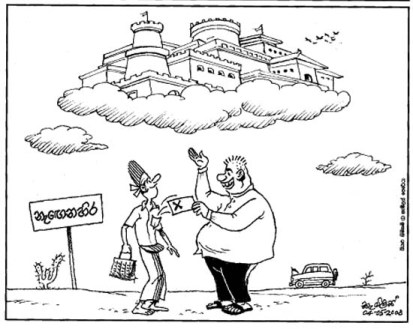 My own favourite, Siribiris, is really Everyman personified: long-suffering, taken for granted by politicians, exploited by businessmen, hoodwinked by corrupt officials, and always struggling to simply stay alive. He is down but not yet out. The only way that poor, unempowered Siribiris can get back at all those who take advantage of him is to puncture their inflated egos and ridicule them at every turn. And boy, does he excel in that!

I grew up enjoying Camillus cartoons in various newspapers meant for children, youth and general readers. I had occasionally seen him being interviewed on TV. But I’d never seen or met him in person — until now. It happened when the British Council Sri Lanka invited Camillus as chief guest at their awards ceremony in the climate change cartoon contest they organised, which I helped judge with three others.

As the master of ceremonies, I announced: “It’s a great pleasure and honour for me to introduce Camillus Perera, the senior-most cartoonist in Sri Lanka who is still professionally active. Indeed, he has been drawing cartoons for as long as I have been alive — for he started his long innings in the same year I was born!” 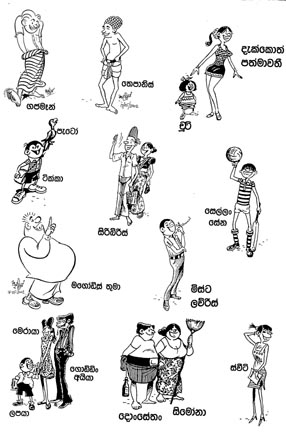 Camillus, a small made and pleasant man, spoke briefly and thoughtfully. (As I keep saying, we writers just can’t beat cartoonists in the economy of words!). He recalled how he’d used the British Council Library for visual references for years before the web made it much easier to search. He congratulated all those who won prizes or commendations in the contest.

Many years ago, I privileged to count senior cartoonist W R Wijesoma as a senior colleague when we both worked for The Island newspaper. Now I have finally met Camillus Perera, another hero of mine still practising his craft and drawing regularly for Rivira Sunday newspaper, as well as The Catholic Messenger and Gnanartha Pradeepaya. My only regret is that I don’t follow any of these newspapers on a regular basis, even though I try hard to keep up with Siribiris on the web…

There is a bit more than childhood idol worship involved here. Satire is one of the last domains we are left with when freedom of expression comes under siege.

As I wrote in July 2009in a blog post on news wrapped up in laughter: “There is another dimension to satirising the news in immature democracies as well as in outright autocracies where media freedoms are suppressed or denied. When open dissent is akin to signing your own death warrant, and investigative journalists risk their lives on a daily basis, satire and comedy becomes an important, creative – and often the only – way to comment on matters of public interest. It’s how public-spirited journalists and their courageous publishers get around draconian laws, stifling regulations and trigger-happy goon squads. This is precisely what is happening right now in countries like Kenya and Sri Lanka, and it’s certainly no laughing matter.“

Taken in that light, Camillus Perera is not just a popular and entertaining cartoonist adorning Sri Lanka’s newspaper industry. He is a gentle giant in the world of journalism — a man of few words whose sharp wit and keystrokes are more piercing than any number of words that we writers and journalists can churn out. He is a living cultural treasure.

So long live both Siribiris — and Camillus Perera!

4 Responses to “Long Live Siribiris – and his creator Camillus Perera!”