Can Citizen Kane and Citizen Journalist join hands in the public interest? 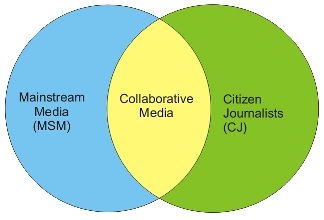 Can this common ground expand?

Is there common ground between the mainstream media (MSM) and citizen journalists (CJ) that can be tapped to better serve the public interest?

This is a central question that I explored in some depth during my recent presentation to an assembled group of media tycoons and senior journalists in Colombo earlier this week, at the Sri Lanka launch of Asia Media Report 2009.

MSM have gone from denial to dismissal to apprehension about this murky, distributed phenomenon called citizen journalists. But, as I asked, must MSM and CJ always compete? Must they consider each other mutually exclusive? I don’t think so.

Consider these facts: CJs are not an organised, unionised mass of people. They are a scattered, loosely connected group that is a community of practice across geographical borders and time zones. They rarely agree on anything among themselves. CJs are not out to topple MSM.

Once we get those points clarified, we can move beyond chest-thumping egotism. We can then address the fundamental values of why MSMs and CJs are both doing what they do: for the free flow of information, ideas and opinions.

Indeed, we should see how MSM and CJs can join hands more to serve the public interest. CJs today are not just frustrated poets and writers who never found a public outlet in the past. Today’s plethora of CJs include scientific experts, professionals, retirees with loads of experience and tech-savvy geeks among many others. This is a vast resource that MSM can tap into — especially in these days of leaner budgets and fewer staff.

Must everything be All-or-Nothing? No!

And why not? Many issues these days are just too complex, technical or nuanced for even the most committed full-time, paid journalists to tackle all on their own. The information is often too vast to wade through in time for deadlines. And things are changing faster too. In such situations, can MSM work collaboratively with CJs, sharing the work load, risk and eventually, the credit?

In fact, MSM have historically relied on citizens to provide part of the content – whether they are letters to the editor, or funniest home videos, or news tips from the public that reporters then pursue. Today’s CJs can take this ‘crowd-sourcing’ to a new level.

I recently came across an interesting example of crowd-sourcing in investigative journalism – a component of journalism that is particularly demanding. Over several weeks in April – May 2009, The Telegraph in the UK disclosed the scandal over many exaggerated or false expense claims made by British Members of Parliament. This left the British public furious, and brought worldwide ridicule on the Mother of all Parliaments.

The story still unfolds. Now, The Guardian has involved readers to dig through the several truckloads of MPs’ expense documents to spot claims that merit further investigation because they seem…a tad suspicious. This is more than what a small team of paid journalists can do on their own: a total of 458,832 pages of documents need be manually checked. So far, 23,262 readers had signed up by 2 August 2009. Many hands make light work for The Guardian, whose editors will then decide which claims are to be further probed and queried.

Mobile: the most subversive ICT of all?

Can we expect to see more of such collaborations in time to come? I certainly hope so. Under siege as they are, MSM should be the first one to make the move to search for this common ground – after all, they have everything to gain and little to lose. We can all think of tedious record-scanning, number-crunching tasks that are needed to unearth and/or understand complex stories of our times.

Of course, for such collaborations to work well, the rules of engagement between MSM and CJs need to be clear, transparent and based on mutual trust. That requires some work, but when it works well, everybody stands to gain.

In late 2005, I researched and worked with Sir Arthur C Clarke to write an essay on the rise of citizen journalists, which first appeared in the Indian news weekly Outlook on 17 October 2005. I’m quite proud of how we ended the essay: “There is more than just a generation gap that separates the mainstream media from the increasingly influential online media…Yet one thing is clear: the age of passive media consumption is fast drawing to an end. There will be no turning back on the road from Citizen Kane to citizen journalist.”

Emerging new models of collaboration in media and journalism indicate that this evolutionary road need not be a one-way street. So nearly four years on, I now raise the question that I first put to the media tycoons of Colombo the other day: Can Citizen Kane and Citizen Journalist join hands in the public interest?

I very much hope the answer is a resounding: Yes, We Can!

2 Responses to “Can Citizen Kane and Citizen Journalist join hands in the public interest?”

« Hurtling towards Information Society at the speed of light – with nobody in charge?
Saving MSM Titanic – or is it lifeboat time for its passengers? »
Loading Comments...
%d bloggers like this: