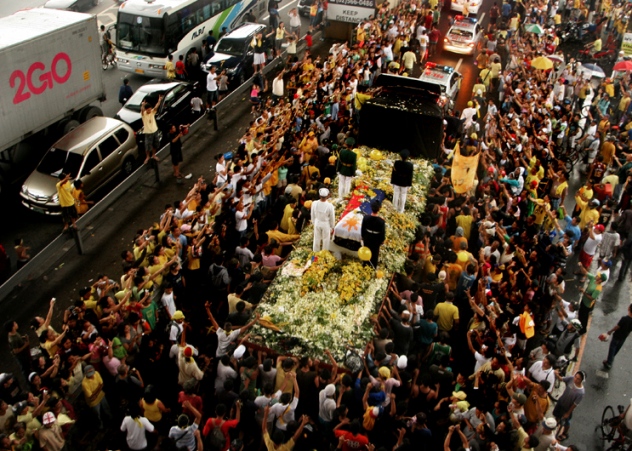 The remains of former Philippine president Corazon Aquino passes through the historical EDSA road with some 300,000 supporters waving to pay their last respect. The road is remembered in 1986 as then anonymous Cory and some 2 million people rallied out the streets to fight a 20-year government dictatorship through peaceful people power revolution. Photo by Arwin Doloricon/ Voyage Film

I know this post appears rather late, but I couldn’t let Cory Aquino’s death on 1 August 2009 pass without comment. The original inspiration for People Power that toppled one of the worst tyrants of the 20th Century, she would now turn the Patron Saint of peaceful democratic struggles everywhere.

Last week, I was reduced to tears reading two links that my Filipino friend Ruth Villarama, who runs Voyage Films in Manila, sent me of new comments posted on their website.

In the first post, A housewife, a leader, an angel in yellow (3 August 2009), Joan Rae Ramirez wrote: “Her death at 3 AM on August 1 has stopped a nation from its apathetic works to once again remember what was once fought by this ordinary housewife. It is on these rarest moments where the oligarchs came down from their kingdoms to pay their respect and mingle with the people who truly represent the real state of the Philippine nation.”

Karen Lim, who works with Voyage Films as a producer and project coordinator, wrote a more personalised piece titled The Famous Anonymous.

It opened with these words: “I see her on TV. In some instances I even covered her for a story. Our relationship did not go deeper than the reporter-subject, or the audience and the watched. Yet I feel a certain affinity to the most revered President. And when she died I got sad, a strange feeling of sadness where the source is unknown.”

Karen was too young to have remembered much of those heady days of the People Power Revolution of February 1986 — a series of nonviolent and prayerful mass street demonstrations in the Philippines that eventually toppled the 20-year autocracy of Ferdinand Marcos. Indeed, a whole generation of Filipinos has been born since. But that doesn’t stop them from relating to the monumental events that unfolded at at Epifanio de los Santos Avenue, known more commonly by its acronym EDSA, in Quezon City, Metropolitan Manila and involved over 2 million ordinary Filipinos as well as several political, military and religious figures.

As Karen wrote in her tribute: “Cory’s life became ours too. We watched her, sometimes we joined her. We experienced her highs and lows. We are her “Mga minamahal kong kababayan”(my beloved fellowman). She did what no stranger did in my family – unite us in prayer for the country, unite us in laughter amidst the uncertainties of those times. I had no personal connection to this lady, but I have now every reason to mourn her passing.” 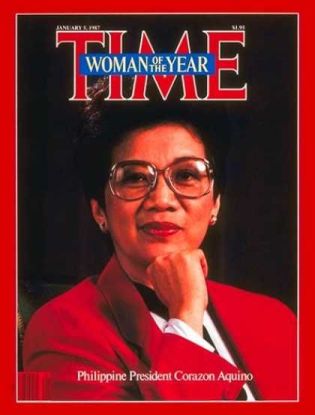 I can only echo her Karen’s words. As a politically curious 19-year-old, I had followed with much interest the daring gamble and eventual triumph of People Power unfolding thousands of kilometres away from my Colombo home. In the pre-Internet era, and before satellite TV channels provided 24/7 coverage across Asia, my sources were daily newspapers, evening news bulletins on local TV and, once every few weeks, the second-hand copies of Time magazine passed on to me by an uncle. The housewife in yellow ended up becoming Time Woman of the Year for 1986, with Pico Iyer writing a suitably reflective piece.

In the years since the return of democracy – with all its imperfections and idiosyncrasies – I have stood at EDSA more than once, and wondered what it must have been like to mobilise millions of ordinary, concerned people in the days before email, Internet and mobile phones — communication tools that today’s political activists, and indeed everyone else, take for granted. There is a thin line between a non-violent struggle and a passionate yet violent mob that, ultimately, works against their own interests. I am amazed that Cory and her activists didn’t cross the line, despite provocations and 20 years of repression.

Of course, it wasn’t just the human numbers that turned the tide in EDSA. Cory Aquino’s charismatic leadership and moral authority persuaded other centres of power – including the Catholic church and sections of the military – to align with the struggle to restore democracy. It was this combination, and the sudden change of mind by the Americans who had backed Marcos all along, that enabled People Power to triumph.

Elsewhere in Asia, where these elements didn’t align as forcefully and resolutely in the years that followed, the outcome was not as dramatic or positive. We’ve seen that, for example, in places as diverse as Tiananmen Square in China (1989), Burma (2007) and most recently, in the streets of Tehran, Iran. In contrast, it did indeed work and ushered in regime change in places like Nepal, even though it entailed more protracted struggles.

What interests me, in particular, is the role played by information and communication technologies (ICTs) in such People Power movements. Alex Magno, a political analyst and professor of sociology in Manila, sees clear links between new communications technologies and political agitation. Interviewed on the Canadian documentary Seeing Is Believing: Handicams, Human Rights and the News (2002), he said: “In the last two decades or so, most of the political upheavals had some distinct link to communications technology. The (1979) Iranian Revolution was closely linked to the audio cassette. The first EDSA uprising in the Philippines was very closely linked to the photocopying machine and so we called it the ‘Xerox Revolution’. Tiananmen, the uprising that failed in China, was called the ‘Fax Revolution’, because the rest of the world was better informed than the rest of the neighbourhood because of the fax machine. The January (2002) uprising in the Philippines represents a convergence between electronic mail and text messaging. And that gave that uprising its specific characteristics.”

But it was People Power II in the Philippines that is perhaps the best known example of ICTs fuelling and sustaining a revolution. The ability to send short text messages on cell phones helped spawn that political revolution in early 2001, a full decade and a half after the original wave that swept Cory Aquino into office.

President Estrada was on trial facing charges of bribery, corruption and breach of the public trust. Despite mounting evidence against him, the President was let off the hook. That was the turning point. According to Ramon Isberto, a vice-president at Smart Telecom in the Philippines: “People saw it on television, and a lot of people were revolted. They started text messaging each other, sending each other messages over the Internet, and that thing created a combustion.”

Because of texting and email, within two hours over 200,000 people converged in the main street of Manila demanding the president’s resignation. The vigil lasted for four days and four nights, until President Estrada finally got the message and stepped down. It ended with Gloria Macapagal-Arroyo taking her oath of office in the presence of the crowd at EDSA, becoming the 14th president of the Philippines.

Those events have been documented, analysed and interpreted by many people from various angles. The Cold War had ended and the geopolitical map of the world had been redrawn. By this time, 24/7 satellite television was commonplace in Asia and the mobile phone was already within ordinary people’s reach. Gloria was no Cory, and Estrada wasn’t Marcos. But the forces and elements once again aligned on EDSA, and with history-making results. The role that the humble mobile phone played is acknowledged, among other places, in a mural in Manila.