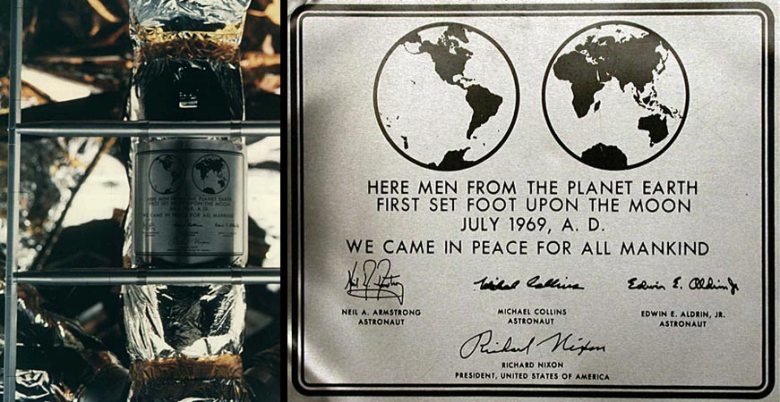 We came in peace for all makind...

When Apollo 11 astronauts landed on the Moon 40 years ago this week, they were more than just Americans taking that historic first step on to another celestial body.

Yes, they planted the US flag there – after all, it was the American tax payers who financed the massive operation. But they left on the Moon other items that signified the universal nature of their mission.

One was a plaque (photo, above) saying “Here men from the Planet Earth first set foot upon the Moon, July 1969 A.D. We came in peace for all mankind.” It bore the signature of the three astronauts –- Neil Armstrong, Edwin (Buzz) Aldrin, Jr., and Michael Collins –- and then US President Richard Nixon. Another was a golden olive branch.

The astronauts also left behind a silicon disc, which is one of the most important and symbolic items taken to the Moon. Etched on to that disc, about the size of a half US dollar coin, are miniaturised messages of goodwill and peace from 73 heads of state or government around the world.

These letters were received by NASA during the final weeks running up to the launch on 16 July 1969, yet this disc helped turn the Apollo 11 mission into an international endeavour.

It was only in June 1969 that the US State Department authorised NASA to solicit messages of goodwill from world leaders to be left on the Moon. This triggered a minor diplomatic frenzy, with invitations going out from Thomas O Paine, the NASA Administrator.

In all, 116 countries were contacted through their embassies in Washington DC, but only 73 responded in time. Sri Lanka, then Ceylon, responded. But for some unknown and unexplained reason, then Prime Minister Dudley Senanayake declined to send a message to the Moon.

When I first heard about it about 18 months ago, I was both intrigued and curious. Was it some misplaced geopolitical considerations, or simple diplomatic arrogance that led to Ceylon’s negative decision? After all these years, we might never find out.

I have now written this up in an article titled ‘How Sri Lanka Missed the Moon’, which appears this weekend in the mainstream media and online in two different versions.

The Sunday Leader newspaper has printed the compact version in its issue for 19 July 2009. Citizen journalism website Groundviews carries the more detailed version, where an interesting reader discussion is evolving…

The story is based largely on a book that came out in 2007. Titled We Came In Peace For All Mankind: The Untold Story Of The Apollo 11 Silicon Disc, it was authored by Tahir Rahman, a Kansas-based physician and space historian.

The book documents the full story behind this little known facet of the very widely covered Apollo 11 mission. It also reproduces each of the 73 goodwill messages, as well as those which were received too late for inclusion on the disc.

“I was amazed at how NASA and the State Department rushed to get these messages before launch,” says Rahman. He took two months to locate from the Library of Congress the boxes in which NASA Administrator Paine had preserved the full correspondence.

While researching for this article, I contacted Rahman hoping for some additional insights, but he replied: “I do not have any information about why Sri Lanka did not send an Apollo 11 goodwill message.”

Sir Arthur C Clarke, with whom I worked for over 20 years, was also intrigued by Ceylon’s decision, which he didn’t know about until Rahman’s book reprinted the official letter. His only remark: “Mysterious are the ways governments think and work.”

Reading the messages, whose English translations are available online, is like entering a time capsule. Only two of the world leaders are still holding office (Queen Elizabeth II of Britain, and King of Thailand); most of them are dead. Some countries have since changed names. Others have been subsumed by neighbours, or broken into two or more independent states. Geopolitical map of the world has been completely redrawn.

The story of the Apollo 11 silicon disc is more a history and politics lesson, and less a science story. But I’m glad that I found a little known facet of the very widely covered Apollo missions to write about on its 40th anniversary.

7 Responses to “No Moon, please – we’re Ceylonese: How Sri Lanka lost the Moon…”