An accountant turned entrepreneur, he received the award at a gala awards ceremony held on 17 October 2012 at the Cinnamon Lakeside Hotel, Colombo, amidst an international audience.

The Commercial Bank has offered a grant worth LKR 1 million to assist Karunathilaka to prepare his invention for commercialisation, while the University of Moratuwa will provide technical advice and guidance.

Six Lankan inventors, already honoured with Presidential Awards for Innovation in recent years, were shortlisted for the award. Coming from diverse backgrounds and training, each had designed or produced a practical solution to an everyday need.

The Ray Award is a biennial, life-time award given in memory of the late Ray Wijewardene, the foremost inventor produced by Sri Lanka, to help a state recognised inventor to commercialise his or her invention. It is administered and presented by the Ray Wijewardene Charitable Trust (RWCT) in collaboration with the Sri Lanka Inventors Commission (SLIC) and the Commercial Bank. 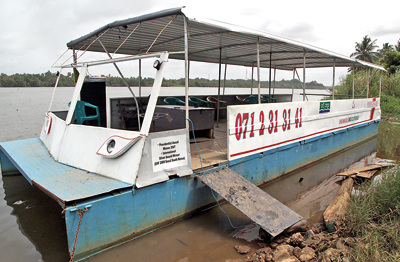 Prototype of waveless eco-boat designed by I S W Karunatilake

The waveless boat is non-symmetric in shape: rectangular on the outside, but has curves facing the inside. It contains twin hulls, which allow water to travel through the hollow mid section and prevents waves being formed on the boat’s sides as it moves.

The boat is eco friendly in other ways too. It consumes less fuel as energy is not wasted in wave generation. Unlike conventional boats made from fibre glass, Karunathilaka’s vessel is made of steel and aluminium, with an anodic protection which reduces corrosion.

He has already built a prototype that can carry up to 50 passengers or 4,000 kg of cargo, which has been operating on the Kalu Ganga since late 2011.
“It was late Dr Ray Wijewardene’s vision and dream to see Sri Lanka develop economically through inventiveness and innovation,” said Dr Tissa Vitarana, Senior Minister of Scientific Affairs, who was chief guest. “The Ray Award celebrates what he stood for.”

“Our inventors need state recognition, society’s appreciation and funding to commercialise their ideas. We really need a good venture capital bank in Sri Lanka to support our inventors – this is what had made a difference in advanced economies like the United States,” he added.

Dr Vitarana noted that only 2 per cent of Sri Lanka’s exports received a high technology input at the moment. He underlined the need for Sri Lanka to develop its own technologies responding the country’s particular needs and powered by the country’s own innovative and enterprising people.

He hoped that RWCT would help Sri Lanka to achieve what the late Ray Wijewardene had in mind: for Sri Lanka to become a developed country without the problems of poverty.

Deepal Sooriyaarachchi, Commissioner of the Sri Lanka Inventors Commission and member of the selection panel said the Ray Award is a celebration of Lankan inventiveness. Long-listed candidates were assessed on three criteria, or three ‘I’s: Invention, Innovation and Impact.

Professor Malik Ranasinghe, Chairman of the Board of Trustees of RWCT, said the Trust supports innovations in sustainable agriculture, renewable energy, engineering and aeronautics – disciplines and pursuits that were close to Ray’s heart. “We hope that ‘The Ray’ will help to create the next Ray Wijewardene in Sri Lanka.”

All past winners of the Presidential Awards for innovation, presented by SLIC, were eligible and invited to apply for the Ray Award. The Trust received a total of 56 applications, which were reviewed by an independent panel that interviewed 17 candidates.

The selection panel was chaired by Prof Uditha Liyanage, Director and Chairman of the Board of Management, Postgraduate Institute of Management (PIM) affiliated to University of Sri Jayawardenapura.