Six Lankan inventors are shortlisted for the inaugural “Ray Award” to help a state recognised inventor to commercialise his or her invention.

All six have proven track records in innovation — they are past winners of the Presidential Awards for Innovation.

The winner will be announced at a gala awards ceremony to be held on 17 October 2012 at the Cinnamon Lakeside Hotel, Colombo 2. The chief guest will be Dr Tissa Vitarana, Senior Minister of Scientific Affairs.

“The Ray” carries a plaque and citation from the Trust. The Commercial Bank would provide a credit line worth Rs 1 million worth to assist the winner to prepare the invention for commercialisation.

Meanwhile, the University of Moratuwa would provide the technical support to convert the winner’s invention to a product or process ready for the market.

The Ray Award is a biennial award given in memory of the late Ray Wijewardene, one of the finest Lankan inventors. Trained as an engineer but applying his skills to help small farmers, he designed the world’s first two-wheeled hand tractor in the 1950s.

The Award is administered and presented by the Ray Wijewardene Charitable Trust (RWCT) in collaboration with the Sri Lanka Inventors Commission (SLIC). It is powered by Commercial Bank.

All past winners of the Presidential Awards for innovation, presented by SLIC, were eligible and invited to apply for this award. As part of their application, they were asked to present a plan for commercialising their invention.

The Trust received a total of 56 applications by the deadline of 31 July 2012. During August 2012, an independent selection panel appointed by the Trust reviewed all applications and conducted face-to-face interviews with a long list of 17 candidates.

Applications were assessed on three criteria, or three ‘I’s – Invention, Innovation and Impact, according to the Ray Wijewardene Trust.

The shortlist of six candidates was announced in early October 2012. Listed in no particular order, they are:

Dr Anil Goonetilleke
A chest specialist who invented a dry powder inhaler, or ‘Ventohaler’, that helps users take in more of the dose 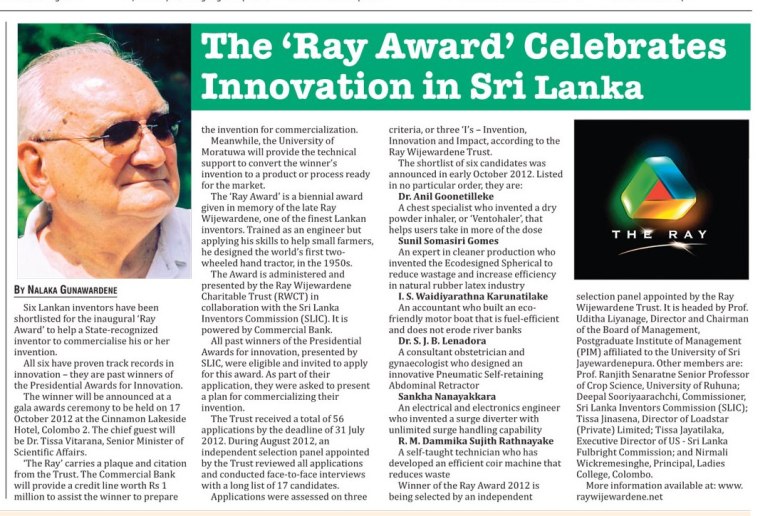