A race against time: Moji Riba capturing living cultural heritage before it's too late...

When young Moji Riba started taking an interest in video cameras and filming, his father was a bit concerned.

“I don’t want my son to end up as a cameraman,” he said, reflecting on the fact that a videographer was considered to be no more than a skilled worker in some sections of Indian society.

He need not have worried. Moji went on to become both a well respected film maker and a teacher of mass communications. But more importantly, he has turned his skill into capturing and preserving the highly diverse cultures and traditions of his home state of Arunachal Pradesh in India’s north-east.

Working below the mainstream media’s radar and improvising with available resources, Moji has been engaged in this pursuit passionately and diligently for nearly a dozen years. These efforts finally came into global spotlight in November 2008 when he was selected for a prestigious Rolex Award for Enterprise.

Rolex recognised Moji for ‘helping to preserve and document the rich cultural heritage of India’s Arunachal Pradesh tribes’. He was among the 10 winners of the 2008 Rolex Awards, which for more than 30 years have supported pioneering work in science and medicine, technology and innovation, exploration and discovery, the environment and cultural heritage.

The award was presented to him at a simple ceremony held in New Delhi on 22 January 2009. I was glad to be a ‘fly on the wall’ on that joyous occasion, when Moji and fellow winner Romulus Whitaker were felicitated.

Accepting his award certificate and Rolex chronometer, Moji said: “In the end, this award is not about material rewards. Our most important gain was the process of the application and evaluation which were so intense and demanding that we have had to go through a lot of introspection.”

He added: “That process made us pause and ask ourselves: why are we doing our work, are we doing it right and what results are we going to achieve. That was worth a great deal for us.”

In his short and witty acceptance speech, Moji thanked everyone who has believed and supported his team’s work. His wife Purnima and two young children were there, along with several friends some of who had especially flown in for the occasion. Moji acknowledged his father, who, alas, didn’t live to share this proud moment.

Through a rigorous and discerning selection process, Rolex Awards support path-breaking work in progress, giving laureates new momentum and recognition. In the 2008 award cycle, Moji was one of 10 enterprising individuals chosen from among nearly 1,500 applicants in 127 countries by an independent panel of scientists, educators, economists and other experts. 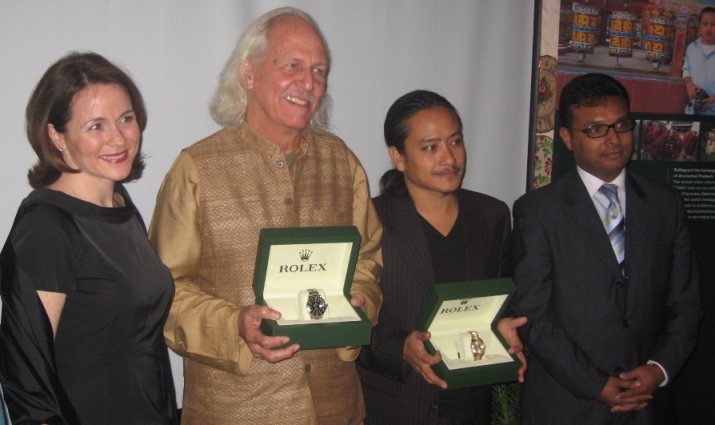 Enthused by the Rolex Award, Moji will return to pursue his most ambitious project yet to preserve the living cultural heritage of Arunachal Pradesh, home to 26 major tribal communities. Each one has its own distinctive dialect, lifestyle, faith, traditional practices and social mores. They live side by side with about 30 smaller communities. Moji sees this richness “like a wonderful shawl woven in a myriad of colours and patterns”.

In recent years, this heritage has come under pressure from economic development, improved means of communication, the exodus of the young and the gradual renunciation of animist beliefs for mainstream religions. Instead of challenging these larger processes beyond anybody’s control, Moji is trying to harness digital technology to capture at least the essence of it for posterity.

That’s the basic idea behind the Mountain Eye Project, an unconventional initiative of his Centre for Cultural Research and Documentation (CCRD) based in Naharlagun. Magic Eye aims to create a ‘cinematic time capsule’ documenting a year in the life of 15 different ethnic groups.

Moji will train young people from each community to do the filming. This gives him access to enough film-makers as well as access to people with an intimate understanding of village life. Beginning in early 2009, these novice film-makers will capture a broad range of the tribes’ oral histories, as well as the rituals, ceremonies and festivals that take place over a year in their villages.

Moji expects to collect about 300 hours of film per village, all of which will be recorded and archived in their native languages. He believes that the resulting 4,000+ hours of video will provide an invaluable record of life as it has been lived in his state for centuries. The project will also engage scholars belonging to the 15 tribes from the Rajiv Gandhi University at Itanagar to analyse and translate this vast amount of data and organize it in a publicly accessible database.

This innovative work epitomises the spirit of Rolex Awards, which nurture excellence in individuals who often work against many odds — determined women and men lighting a few candles on their own, instead of just cursing the darkness…

As I enjoyed the company of Moji, Romulus and their many admirers well into Delhi’s chilly evening, these words the Malaysian social and environmental activist Anwar Fazal kept turning in my mind: “In a world that is increasingly violent, wasteful and manipulative, every effort at developing islands of integrity, wells of hope and sparks of action must be welcomed, multiplied and linked…”