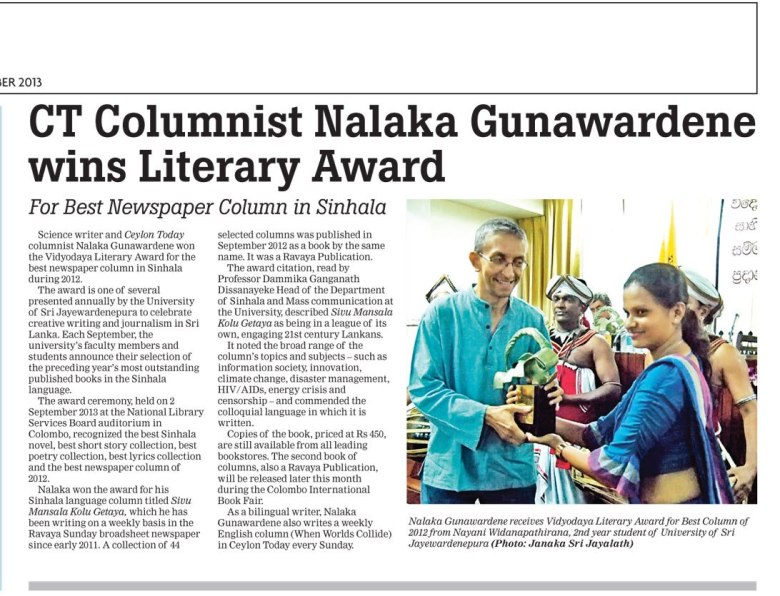 The award is one of several presented annually by the University of Sri Jayawardenapura to celebrate creative writing and journalism in Sri Lanka. Each September, the University’s faculty members and students announce their selection of the preceding year’s most outstanding published books in the Sinhala language.

Nalaka won the award for his Sinhala language column titled Sivu Mansala Kolu Getaya (සිවුමංසල කොලූ ගැටයා), which he has been writing on a weekly basis in the Ravaya Sunday broadsheet newspaper since early 2011. A collection of 44 selected columns was published in September 2012 as a book by the same name. It was a Ravaya Publication.

The award citation, read by Professor Dammika Ganganath Dissanayeke,  Head of the Department of Sinhala and Mass communication at the University, described Sivu Mansala Kolu Getaya as being in a league of its own, engaging twenty first century Lankans.

It noted the broad range of the column’s topics and subjects – such as information society, innovation, climate change, disaster management, HIV/AIDs, energy crisis and censorship – and commended the colloquial language in which it is written.

Copies of the book, priced at Rs 450, are still available from all leading bookstores. The second book of columns, also a Ravaya Publication, will be released later this month during Colombo International Book Fair.

As a bilingual writer, Nalaka Gunawardene also writes a weekly English column (When Worlds Collide) in Ceylon Today every Sunday.