Waiting for My Own Mandela…not any longer!

In a wistful essay titled ‘Memories of War, Dreams of Peace, hurriedly put together in mid May 2009 as Sri Lanka’s long and brutal civil war ended, I wrote: “Our political leaders, in whom we entrust our collective destiny, now face a historic choice… African analogies can go only so far in Asia, but at this juncture, it is tempting to ask: would our leaders now choose the Mandela Road or the Mugabe Road for the journey ahead?”

Four years on, that now reads rather naïve. In hindsight, I should have known better — and not pinned any hopes on political leaders again.

I say “again” because, just once before in my life, I did so: In mid 1994, six months after Nelson Mandela became the first majority elected President of South Africa, we Lankans elected Chandrika Bandaranaike Kumaratunga as our own President, with the largest ever electoral mandate (62% of votes).

Like many others at the time, I expected Chandrika to usher in a more pluralistic, accountable and caring form of government. Little did we know that it would all be squandered after her first 1,000 days…

I touch on this briefly in a 95th birthday tribute to Nelson Mandela, published in Ceylon Today newspaper as well as on Groundviews.org website.

The essay draws on my own memorable experience of listening to Mandela speak at the UN Headquarters in New York, in October 1995, and my three brief visits to post-apartheid South Africa over the past dozen years.

Oh, President Chandrika also came to the UN in New York on that occasion, accompanied by her astute foreign minister, the late Lakshman Kadirgamar — who came closest to being Lanka’s moral and intellectual colossus of global stature.

My South African room mate in New York, Dante Mashile, and I lined up hours ahead of the event to get through the intense UN security. On that ch

illy and windswept October morning in uptown Manhattan, we were two bright-eyed, idealistic young men fired by the audacity of hope.

In the end, my own leader didn’t walk her talk. But Dante’s did. That made all the difference for our two nations…

The Rainbow Nation had a troubled birth, and nearly two decades on, it’s still a work in progress. There are huge imperfections, and the reality falls short of aspirations. But without Mandela’s statesmanship, things could have been far worse.

As I note in this new essay:

“I have finally realized the futility of waiting for my own Mandela. There won’t be one, and there’s no time to waste.

“We must carry the flame ourselves — even if it’s only a candle in the wind.”

Read full text on Groundviews.org and join the conversation: Waiting for my Own Mandela… 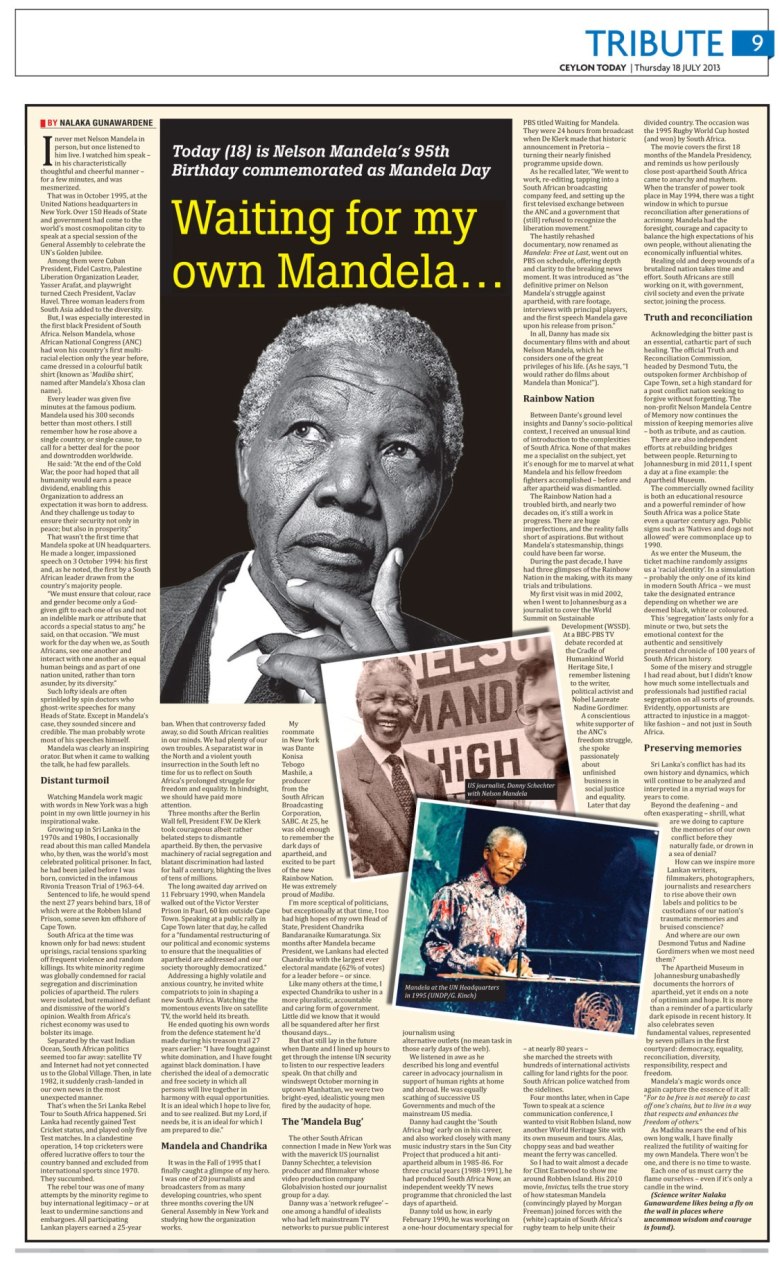 One Response to “Waiting for My Own Mandela…not any longer!”