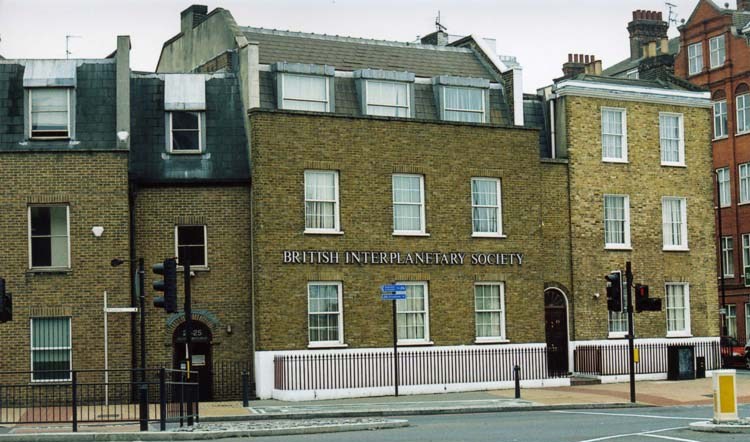 I seem to have a knack for visiting the UK just when Nature decides to remind the hapless islanders who is really in charge. Last April it was the Icelandic volcano Eyjaffjalljokull coughing up. Last week it was sub-zero temperatures and freezing winds coming all the way, with love, from Siberia…

But London’s spirits are not so easily dampened by ash or snow (but they all groaned when their bid for FIFA World Cup 2018 lost to Russia’s). A highlight of my week’s stay was a visit to the British Interplanetary Society (BIS) headquarters on South Lambeth Road.

BIS, founded in 1933 by Phil E Cleator, is the oldest organisation in the world whose aim is exclusively to support and promote astronautics and space exploration. It was originally set up not only to promote and raise the public profile of astronautics, but also to undertake practical experiments in rocketry. But the pioneering British ‘space cadets’ soon discovered that Britain’s the Explosives Act of 1875 prevented any private testing of liquid-fuel rockets.

Undaunted, they continued with their thought experiments, discussions and public advocacy. Perhaps it was just as well that they didn’t get into the messy (and potentially hazardous) business of rocketry. For over 75 years, they have been preparing humanity’s engagement with the realm and challenges of space. Unlike its American and German counterparts, the BIS never became absorbed into the rocket or space industries that developed after the Space Age began in 1957.

Arthur C. Clarke (far right) and other members of the British Interplanetary Society had a visit from rocket pioneer Robert Truax (holding the rocket model) in 1938

I have always admired the BIS for their pioneering role in popularising space travel, and having ha the audacity to dream of it and in public too. So I was delighted to be invited to the BIS annual Christmas get-together on the evening of December 1. This year, they celebrated the life and times of their founder member and two-time chairman, Arthur C Clarke.

Mark Stewart, the energetic librarian and archivist at BIS, heard I was visiting London and invited me to join their members-only event. Mark is currently looking after one of the finest collections on astronautics on this side of the Atlantic. Some records and documents at the BIS Library go back to the 1930s.

It was good to finally visit ‘ground zero’ of where it all began — nothing less than humanity’s long (and eventual) journey to the stars, hatched by a group of starry-eyed youth as an entirely private, citizen initiative. It took another 20 years — and considerable battering of London by Germany’s V2 rockets — for the British government to take it seriously.

I spent the afternoon chatting with Mark and Colin Philip, a BIS Fellow. Joining us later was Mark’s teenage son Alex, a next-gen space cadet already volunteering at the society. They gave me the guided tour — only a few months ago, I heard, a certain N. Armstrong had been similarly shown around. The society is certainly proud of its history and Sir Arthur’s photos, books, papers and posters are prominently displayed.

The evening gathering was attended by 40 – 50 members, who were treated to an illustrated talk by Mat Irvine, British TV personality who has worked on many science and science fiction shows over the years, gave an illustrated talk about his friend Arthur. (Confession: I was so engrossed in his talk that I forgot to take any photos of him making it!)

I was familiar with much of the ground that Mat covered, but there were occasional revelations. For example, I didn’t know that circa 1995, Mat and (Sir Arthur’s brother) Fred Clarke had worked with the Isle of Man Post Office to issue some stamps bearing Sir Arthur’s visage and other iconic images associated with him, e.g. the monolith from 2001, comsats, etc. Alas, the plans didn’t work out, but Mat still has the designs and is hopeful that the British Post Office might consider it for the author’s birth centenary in 2017. Of course, some lobbying will be needed…but there’s plenty of time for that.

Like all non-profits these days, the BIS is struggling financially. It also faces the challenge of recruiting younger members – the average age of the Christmas gathering seemed to be 55 or 60. They have fascinating stories to tell (among them: the inside story how Apollo 13 was saved), but forward transmission requires more new blood.

The Council, I heard, is working on repositioning the society for the Facebook generation, and I wish them every success. ‘Imagination to reality’ is their motto, and they have seen a good deal of day-dreaming of the pioneering space cadets come true.

« Connecting researchers and the media: Easy as A, B and C?
Looking for honest and courageous people in today’s Sri Lanka: NIA 2010 »
Loading Comments...
%d bloggers like this: