Counting growth on a warming planet: It’s the eco2nomy, stupid!

‘Climate change is the greatest market failure the world has ever seen,’ said the Stern Review on the Economics of Climate Change that the UK government published in November 2006. This 579-page assessment on the economics of climate change was headed by Sir Nicholas Stern, a former chief economist at the World Bank. The report warned that the world economy will suffer a serious blow if action to slow down climate change was not taken soon. According to Stern,’There is still time to avoid the worst impacts of climate change, if we take strong action now.’

Though not in the same league, this interesting call to action just caught my eye – it reminds us of a slogan that rode Bill Clinton to office in the 1990s, but takes on a whole new meaning now on a warming planet. 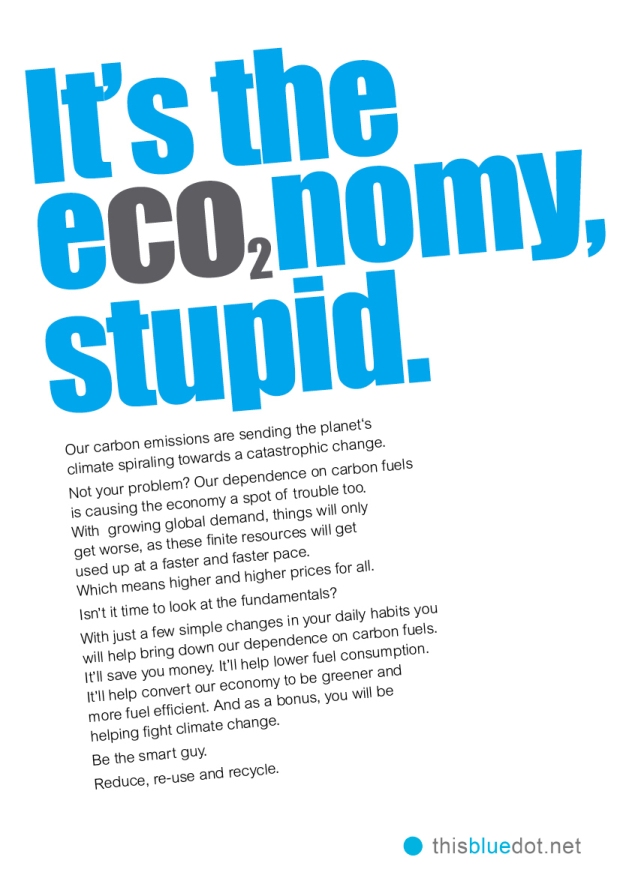 The reference given, http://www.palebluedot.net, did not have a working website as at today, 27 March 2010.

The Stern Review is the most comprehensive, rigorous and terrifying report published todate by a finance ministry. It points out that carbon emissions have already increased global temperatures by more than 0.5°C and that with no action to cut greenhouse gases, we will warm the planet another 2 to 3°C within the next 50 years. This will transform the physical geography of the planet and the way we live, with floods, disease, storms and water shortages becoming more frequent.

Stern and his team – no crying-wolf greenies, them – cautioned that the effects of climate change could cost the world between 5% and 20% of GDP, prompting the worst recession since the 1920s. Action to reduce greenhouse gas emissions and the worst of global warming, on the other hand, would cost 1% of global GDP.

One Response to “Counting growth on a warming planet: It’s the eco2nomy, stupid!”

« So you think you can be a Hot-shot? Go right ahead…
Earth Hour 2010: Feels good, but how about tackling ‘vampire power’? »
%d bloggers like this: