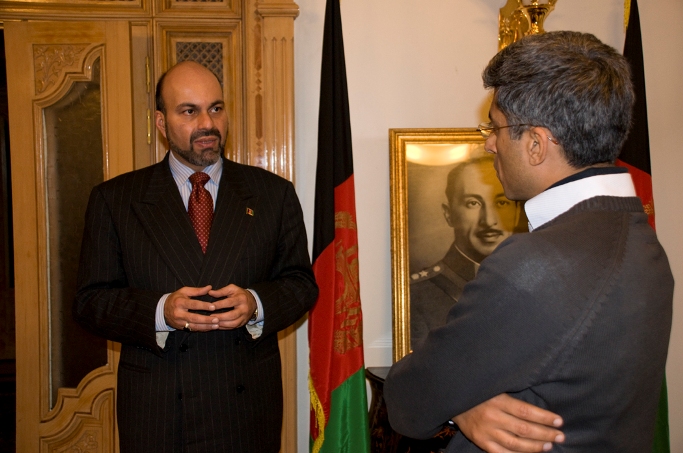 I haven’t yet met Prince Mostapha Zaher in person, but feel almost as if I have. That’s because he features prominently in a short documentary film we released earlier this year on the environmental problems in Kabul, the capital of Afghanistan — where he is now the environmental chief, and where his grandfather was Afghanistan’s last king, Mohammed Zahir Shah (1914-2007).

In January 2009, I was watching a rough edit of the film (Breathing Life into Kabul) in Delhi, where Indian film-maker Rohit Gandhi was putting it together. In the interview, Mostapha Zaher came across as authoritative and resolute.

And does he have formidable challenges to deal with! Since the Taliban regime fell in 2001, people have been returning to Afghanistan after years in neighbouring countries. This massive influx is exerting pressure on the resources and infrastructure of the capital Kabul. Among the effects are high levels of air and water pollution, massive shortages of electricity and mounting problems waste.

Addressing these and other environmental issues is made that much more difficult because Afghanistan is one of the poorest countries in Asia, where large parts of the country are still engulfed in a prolonged conflict with extremists and the Taliban.

For staying the course in this daunting task, Prince Mostapha Zaher has just been named as one of TIME Magazine’s Heroes of the Environment 2009. He is among ‘Leaders and Visionaries’ from around the world selected by the editors of the international news magazine. The list includes President Mohamed Nasheed of the Maldives, Hollywood star Cameron Diaz, and Indian film maker Mike Pandey.

TIME describes how Zaher gave up his comfortable post as ambassador to Italy to take up the job of director of Afghanistan’s newly formed Afghanistan’s National Environmental Protection Agency (NEPA) in 2004.

Says TIME: “Since then he has worked to rewrite the nation’s environmental laws, enshrining in the constitution an act that declares it the responsibility of every Afghan citizen to “protect the environment, conserve the environment and to hand it over to the next generation in the most pristine condition possible.” In a country ravaged by 25 years of war, it was an extraordinary feat.”