Passing the buck or passing the planet? Saving the Planet is everybody’s business!

This was one of the most memorable cartoons drawn by W.R. Wijesoma, Sri Lanka’s pre-eminent political cartoonist (and my one-time colleague). If I remember right, it first appeared sometime in the late 1980s in ‘Mihikatha’, Sri Lanka’s first all-environmental newspaper.

Alas, both Mihikatha and Wijesoma are no more among us. But the message in this cartoon is more timely than ever before.

“Is this what we are going to hand over to our future generations? Please……no!” was the emphatic message from Yugratna Srivastava, a 13-year-old Indian girl who addressed over 100 world leaders gathered at the United Nations headquarters on 22 September 2009 for the historic Summit on Climate Change.

Passing the ball – or buck – is something that governments are good at. Most governments are so narrowly focused on the now and here, and sometimes rightfully so, that they have neither the time nor interest for medium to long term scenarios. As I wrote earlier this week, “it’s going to take many more meetings, bickering and hard bargaining before the leaders begin to think in terms of the next generation.”

This is where citizen action comes in. Governments are not going to save this planet from environmental catastrophes; if at all, it would be the ordinary people. This is the premise of TVE Asia Pacific’s latest Asian TV series, Saving the Planet. 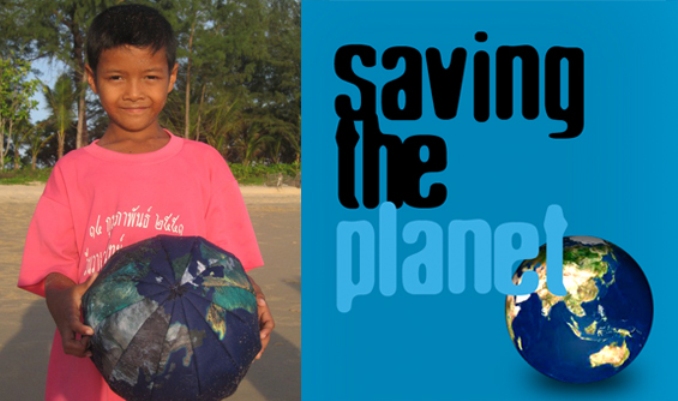 Where does the buck stop?

Governments, experts and big corporations alone cannot solve all these problems. Real change requires changing how each and every human being lives and works. Education becomes the biggest key to achieving environmentally sustainable development at local and global levels.

Filmed in six countries in South and Southeast Asia, Saving the Planet profiles groups working quietly and relentlessly to spread knowledge, understanding and attitudes that inspire action that will help humans to live in harmony with the planet. They often work without external funding and beyond the media spotlight. They have persisted with clarity of vision, sincerity of purpose and sheer determination. Their stories inspire many others to pursue grassroots action for a cleaner and safer planet.

We tried out a creative idea for the series opening sequence (20 seconds), an extended version of which became the series trailer (see below). It was planned and filmed in all the six countries where the stories came from — Cambodia, India, Laos, Nepal, the Philippines and Thailand. In each country, our roving director-producers filmed different individuals – young and old, men and women, in all their Asian diversity – passing around an inflated ball made to look like planet Earth.

I know my colleagues had fun filming these sequences, and back in our studio, it was also great fun to mix and match these various shots to create the apparently seamless passing around of our planet in peril. (Who said planet saving cannot be fun?)

Now it can be revealed: our original inspiration came from an unexpected source: the world’s largest media corporation, Google! In one brainstorming, our then production coordinator Buddhini Ekanayake remembered an open challenge that Google had made online just before introducing their email service, GMail. Google asked people to “imagine how an email message travels around the world” using a video camera.

In all, Google received over 1,100 clips from fans in more than 65 countries around the world — each one of them a different creative idea, playing with the iconic Gmail M-velope.

“The clips you submitted were amazing and it was hard to choose selections for the final video,” Google said when releasing the outcome of this collaborative video project.

Read more about the GMail collaborative video on Google’s blog

Watch all submissions Google received for its GMail promo video.

As Oscar Wilde once said, “Talent borrows. Genius steals.” You can decide which of these we have done!

« Next Election or Next Generation? World leaders, time to choose is NOW!
Rising from the Ashes: The Ayta’s struggle to preserve their heritage »
Loading Comments...
%d bloggers like this: