Memory is a curious phenomenon. Sometimes memories of our personal past are evoked in the most unexpected manner, reviving nostalgia for days that are forever lost in the sands of time.

I have never visited Poland, but it’s been on my mind in recent days. 1 September 2009 marked the 70th anniversary of the beginning of the Second World War – which was sparked off by Nazi Germany’s invasion of Poland.

That’s also the day when the Anglo-American poet W H Auden wrote his deeply evocative poem, September 1, 1939. He wrote it sitting in a New York bar and distraught by the clouds of hatred gathering over Europe. I’ve been reading and re-reading it this year as the war Sri Lanka – which lasted almost five times longer – officially ended in May 2009.

As I wrote at the time: “Almost 70 years later, at the end of my own 30-year-long war, I have been reading and re-reading September 1, 1939. I’m trying to make sense of what is happening around me. The near hysterical mass euphoria on one side, and bewildered dejection on the other.”

I have only just remembered that Poland in September 1939 holds another significance for me. It has to do with the Polish film Moja Wojna – Moja Milosc (My War-My Love, 1975), which I saw in the summer of 1979 at a Colombo cinema as a 13-year-old school boy.

Not only did I see the film, but I also wrote an essay reviewing it and entered it into a competition organised by the Embassy of Poland. Growing up in a country that didn’t have broadcast television until that very year, I had only seen a handful of movies up to that time. I was no movie critic, but my views on the film and its resonance with my own times must have struck a chord with the judges. For I won the second prize in the Sinhala essay competition.

Being runner-up was no big deal by itself, but this was the first time that my writing was competitively judged and ranked by anyone outside my immediate circles. My prize included a fountain pen, white polyester cloth for school uniforms, and an LP record of Polish music (yes, LPs were still in use, but on their way out at the time!). 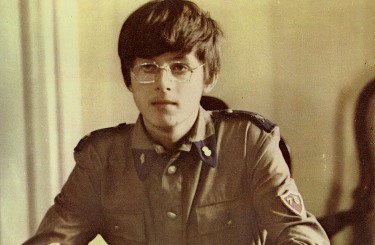 From My War - My Love

I would go on to win many essay competitions during my teens, and one day earn an honest living as a wordsmith. But that movie review – long since lost in the mists of time – was my first success. My career in literary crime was thus forged…thanks to a Polish movie!

From the little that I can still remember, 30 summers later, My War-My Love wasn’t a pretty film. It is set during the week of the Nazi invasion of Poland in 1939. Daring 17-year-old schoolboy Marek (Piotry Lyjak), inspired by the example of the Sobieski cadets during 1831 insurrection, vows to take on Germans single-handedly. He devotes most of his energy to protecting a young girl who lost her mother during the invasion.

As one reviewer wrote, “My War-My Love could not, by its very nature, end altogether happily, but the film can be regarded as life-affirming.”

War has no place for innocence - then or now...

That film was my first visual introduction to the horrors of war, a topic that was to dominate my own future for the next 30 years to come. In that Sri Lankan war, child soldiers several years younger than the film’s character Marek would play a prominent role.

At a far more personal level, I had never been in love when I saw My War-My Love. In the three decades to follow, I would fall in love three times — and lose out every time, though for very different reasons (none of which involved ‘my’ war). I must now carry the pain of these lost loves for the rest of my time. But that is another story…

Thanks to the wonders of Google, I’ve been able to track down some specifics about the film. It was directed by Janusz Nasfeter (1920 – 1998), a versatile Polish film maker whose career in writing and directing films spanned from the late 1940s to the early 1980s. He was 19 when the Germans came marching in.

It was one of many films that have used the Second World War as its backdrop. There have been several other Polish films that looked back on the Polish resistance, Poland Holocaust and Warsaw uprising of 1944 and other key events that left an indelible mark on the country. In fact, as this listing in Wikipedia shows, when Janusz Nasfeter made My War-My Love, the theme was pretty much covered by different Polish film makers in numerous ways.

I haven’t seen any of these other Polish films, and even My War-My Love is now only a distant memory. But as a moving image creation that moved my life in a certain direction, it would always have a special place in my heart.