Post-war Sri Lanka: Can we dial up a better future? 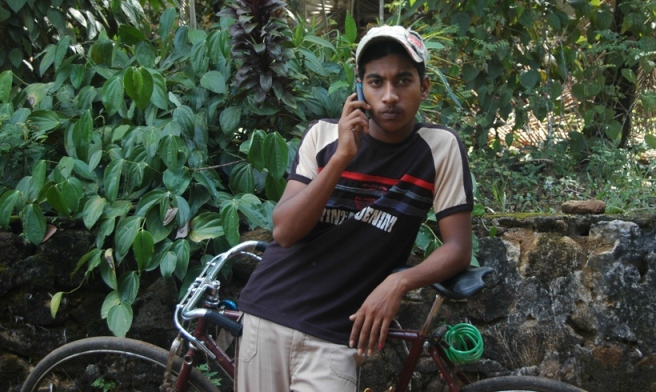 Chamara Pahalawattage: At 18, he is already using his 6th mobile (Photo by Niroshan Fernando, TVEAP)

When many able-bodied young men and women of his age were joining the armed forces in large numbers, Sri Lankan school-leaver Chamara Pahalawattage chose differently. He decided to try his luck with odd jobs at construction sites.

That, by itself, was nothing unusual. Tens of thousands of young men and women like Chamara join the labour market every year. Schools don’t equip them with attitudes or skills for self employment, so most would idle years away looking for regular jobs in Sri Lanka’s public and private sectors. Frustration would prompt some to take to political agitation, or worse.

Chamara is at such crossroads in his own life, but he is unlikely to go astray. The enterprising young man has boosted his chances of part-time work by getting himself a mobile phone.

“After buying a phone, I get calls asking me to come for work. The phone makes it so easy,” he says. “Otherwise people will have to come looking for me…or I have to go to them.”

If a skilled mason or carpenter takes him on as an assistant, Chamara gets a daily wage of LKR 700 (US$ 6 approx) plus a mid-day meal. That income augments the modest LKR 4,000 a month (US$35) his mother makes cooking meals at a nearby factory.

In February 2009, we filmed a day in the life of Chamara, a resident of Gonapola, in Sri Lanka’s western province. This was part of a profiling of telephone users at the bottom of the (income) pyramid – or BOP – in emerging Asian economies, undertaken by TVE Asia Pacific on behalf of the regional ICT research organisation LIRNEasia.

Going by his household income, Chamara is BOP at the moment – but his aspirations extend above and beyond. An only child raised by his widowed mother, Chamara developed an interest in mobiles while still in his mid teens. He bought his first mobile two years ago, when in Grade 11 at school.

“Almost everyone had phones, so I also wanted one,” he recalls. “From then on, I got used to having a phone!”

And has he been keeping up with technology! He buys second-hand phones for better features: he currently owns his sixth phone in just over two years. He had paid LKR 7,500 (US$ 65) for his latest phone at the beginning of 2009.

Besides voice and SMS (texting), his phone supports MP3, video recording, song downloading, voice recording and some other functions. After a hard day’s work, he unwinds listening to the radio, or swapping songs with friends — all using their mobiles.

Chamra spends an average of US$3 to 4.50 per month on phone use, and – like all other BOP telephone users we interviewed in India, Philippines and Thailand – he is thrifty with value added services that cost extra. This is something that has been confirmed by LIRNEasia’s Teleuse@BOP 2008 survey.

“Some of my friends access the internet through their phones and download songs,” he says. “I then get these songs from them. My phone has bluetooth. I use it to transfer songs from my friends’ phones.”

Chamara has every intention of moving up the labour market – someday, he wants to hold a more regular job, with an assured monthly income. Right now, in spite of being connected, he can’t predict how many days a month he’d find work.

Hello, can you hear our dreams? Photo by Niroshan Fernando, TVEAP

“I don’t check newspapers for jobs. Instead I ask the people I know…mostly my friends,” he says. This probably indicates another shift from a wide-spread habit among literate Sri Lankans scanning newspapers for recruitment notices.

The official end of the 30-year-long war should be good news for Chamara and millions of other tech-savvy, eager youth like him. Like me, they can once again start dreaming of better tomorrows.

Telecommunications would be a good place to start. For several years, it has been the fastest growing sector in the Sri Lankan economy — one that has not only connected people across distances and cultures, but also been a ‘social leveller’.

As I noted last year: “It is not by accident that telecom has remained the fastest growing sector in the economy for a decade. This was triggered and sustained by the far-reaching policy and regulatory reforms which ended the then fully state-owned telecom operator’s monopoly, and allowed the entry of new players, technologies and business models.”

Of course, improved telecommunications are necessary, but not sufficient by itself, for us to evolve into an inclusive information society. Building on technology and systems, we must become discerning creators and users of information. Knowledge – not paranoia or rhetoric – needs to form the basis of policy and actions that propel us to the future.

One Response to “Post-war Sri Lanka: Can we dial up a better future?”

« I remember Auden: We must love one another or die…
Sri Lanka: Memories of War, Dreams of Peace »
%d bloggers like this: