‘Can you hear us now?’ India’s bottom millions connect to information society 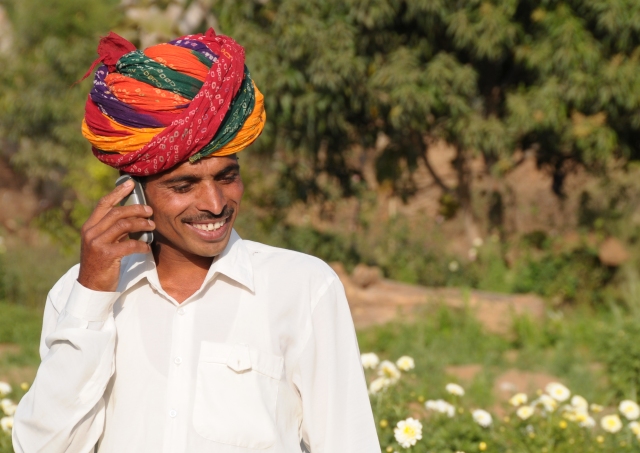 It’s too early to discuss what role, if any, the recently enhanced telecommunications services played in this outcome. But there is no doubt that access to telephones – especially mobiles – has revolutionised the life of the billion plus Indians in the past few years.

Farmer Sayar Singh epitomises this change. Earlier this year, we filmed a day in the life of Sayar, a resident of Pushkar Nala in India’s Rajasthan state. This was part of a profiling of telephone users at the bottom of the (income) pyramid – or BOP – in emerging Asian economies, undertaken by TVE Asia Pacific on behalf of LIRNEasia.

Sayar is definitely BOP: growing wheat and flowers on his ancestral land, he makes around INR 6,000 (USD 115) a month – on which income he sustains an extended family that comprises his wife, four children, elderly father and an unmarried sister. Life isn’t easy for this 33-year-old, but his spirit of enterprise is as abundant as his praise for his newly acquired mobile phone.

He only bought a mobile in mid 2008, but eight months later, that investment had definitely improved business and social life for him. So much so that his life’s narrative is clearly divided as Before Mobile and After Mobile.

“Our life before the mobile phone was hard,” he says. “I took two days to do what I can now do in a day. Now I can get in touch immediately and all my work happens faster and more easily!”

He now tracks market prices and moves his produce quickly for better profits. With workload reduced and income doubled, Sayar has reaped dual benefits from his mobile.

This isn’t Sayar’s first experience with owning a telephone. Earlier, he was frustrated with a fixed phone that didn’t work half the time. The service was so bad that he gave up the phone after a while.

He recalls: “Phone wires in our village were often faulty. They used to be out of order for 2 or 4 days, sometimes even half a month! All my work was affected. I couldn’t talk to my brothers and sisters. Call charges were also high. When my phone line was down, I had to call from STD booths or neighbours’ phones.”

In our interview, Sayar kept referring to his fixed phone connection as ‘government phone’ – a reflection of the state-owned former monopoly. It was a reminder of just how bad telecom services were in India until only a few years ago.

As Shashi Tharoor, the former UN Undersecretary General – who, incidentally, has just been elected into Indian Parliament from his native Kerala state – has remarked, India had possibly the worst telephone penetration rates in the world.

He wrote in 2007: “Bureaucratic statism committed a long list of sins against the Indian people, but communications was high up on the list; the woeful state of India’s telephones right up to the 1990s, with only eight million connections and a further 20 million on waiting lists, would have been a joke if it wasn’t also a tragedy — and a man-made one at that.” 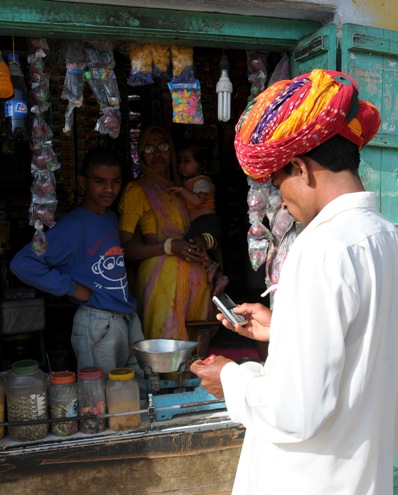 Connected and contented: Sayar Singh by Suchit Nanda for TVEAP

Tharoor recalled the infamous words of Prime Minister Indira Gandhi’s communications minister in the 1970s, C.M. Stephen. In response to questions decrying the rampant telephone breakdowns in the country, the minister declared in Parliament that telephones were a luxury, not a right. He added that ‘any Indian who was not satisfied with his telephone service could return his phone’ — since there was an eight-year waiting list of people seeking this supposedly inadequate product.

According to Tharoor, Mr Stephen’s statement captured perfectly everything that was wrong about the government’s attitude: ignorant, wrong-headed, unconstructive, self-righteous, complacent, unresponsive and insulting. “It was altogether typical of an approach to governance in the economic arena which assumed that the government knew what was good for the country, felt no obligation to prove it by actual performance and didn’t, in any case, care what anyone else thought.”

All this didn’t change overnight, and as Tharoor reflects, the key contribution of the government was ‘in getting out of the way’ — in cutting license fees and streamlining tariffs, easing the overly complex regulations and restrictions that discouraged investors from coming in to the Indian market, and allowing foreign firms to own up to 74 per cent of their Indian subsidiary companies. “The Telecom Regulatory Authority of India (TRAI) has also been a model of its kind, a regulatory agency that saw its role as facilitating the growth of the business it was regulating, rather than stifling it with rules and restrictions.”

It still took time for this revolution to be felt at the bottom of the pyramid. As LIRNEasia says: “Just five years ago, the Indian telecom industry’s massive momentum barely included the poor. The country had slightly over seven access paths (fixed and mobile connections) per 100 people, but in rural India 100 people were served by only 1.5 access paths. Even in urban India, the poor were unconnected.”

Then things started changing rapidly. According to LIRNEasia’s latest teleuse@BOP survey, 45 per cent of Indian BOP teleuser households had a phone in late 2008: 37% had a mobile only; 5% had a fixed phone only; and 3% had both. This is massive progress from the 19 percent of BOP homes with a phone just two years ago. Read more about BOP telephone penetration and use in India.

Tharoor has called this the “mobile miracle” — one that has accomplished something socialist policies talked about but did little to achieve: empowering the less fortunate. Rapid mobile penetration in my native Sri Lanka has had a comparable social transformation – in a commentary last year, I called the ubiquitous mobile ‘Everyman’s new trousers’.

Of course, the mobile revolution is far from over. There are many more millions yet to be connected, and those already connected expect affordable, reliable and value-added services.

“Indian BOP is still in the mobile 1.0 mode using mainly voice and missed calls functionality. Messaging is being used by only a third of the BOP population. Mobile payment and government services use is almost non-existent,” Rohan Samarajiva, chairman and CEO, LIRNEasia, was quoted as saying soon after the latest study was presented in India in February 2009.

How far and how much value added mobile services can penetrate the BOP remains to be seen. Sayar Singh, for example, currently spends US$ 8.6 to 9.5 a month on phone services – over 8% of his enhanced monthly income.

“I haven’t subscribed to any services like cricket news or astrological forecasts. I don’t need them…and I don’t want to spend on them,” he said in our interview.

But mobile telephony is an area where the boldest projections have been exceeded – so never say never.

Cellphones and the Economic Modernization of India: Listen to Shashi Tharoor at Asia Society, NY, in 2007: