From Nyota Uhura to Michelle Obama: The inspiration continues!

Actress Whoopi Goldberg was a child of 10 when the original series of Star Trek started its first broadcast on NBC in the US in September 1966. The futuristic science fiction series – about a spaceship travelling across space and time in the 23rd century in search of new civilisations – was to leave a lasting impression on many members of her generation.

In Whoopi’s case, it went beyond just general inspiration. Something in the show seemed incredible to the African-American child growing up in a land where colour and race were still divisive factors. She recalls running around the house, screaming: “Hey mom, look! There’s a negro woman on TV — and she ain’t cooking dinner!”.

‘That woman’ was the character Nyota Uhura, played by Nichelle Nichols. This anecdote is captured in the 1997 documentary Trekkies, which explored the global fandom inspired by the show, which has gone on to become a franchise covering several TV series, 11 feature films (including the latest ‘origins’ film released on 8 May 2009), an animation series, as well as numerous books, video games and computer games. As Forbes magazine once noted, the allure is comparable only to that of Star Wars.

Uhura featured as the communications officer on board the USS Enterprise in Star Trek: The Original Series, Star Trek: The Animated Series, and the first six Star Trek films. She is significant as one of the first major black characters on an American television series and for engaging in a then-taboo interracial kiss with Captain James T. Kirk (William Shatner). In the 2009 film, a younger Uhura is portrayed by actress Zoë Saldana.

The inclusion of Uhura, a black woman, in a critical technical position was certainly idealistic in the mid 1960s when the American civil rights movement was still agitating for equal rights for African Americans. She one of the first black women featured in a major television series not playing a servant; her prominent supporting role as a female black bridge officer was unprecedented.

As I’ve just noted in another blog post: “At a time when there were few non-white or foreign roles in American television dramas, Gene Roddenberry created a multi-ethnic crew for the Enterprise, including an African woman, a Scotsman, a Japanese American, and—most notably—an alien, the half-Vulcan Spock. In the second season, reflecting the contemporaneous Cold War, Roddenberry added a Russian crew member.”

But was the character, donning a sexy mini skirt uniform, somewhat tokenistic? Perhaps. But it still had considerable inspirational value – which is never to be under-estimated.

In fact, after the first season of Star Trek, Nichols had become frustrated at her relative lack of lines. At one point, she considered quitting the show, but was talked out of this decision by the civil rights leader Dr Martin Luther King, Jr.. MLK told her that a show that depicted a black woman working alongside whites in a position of importance was important for the goal of racial equality.

Another version of the story has MLK telling Nichols that he was a big fan of the series, and she “could not give up” since she was playing a vital role model for black children and young women across the country. It is also often reported that Dr. King added that “Once that door is opened by someone, no one else can close it again.”

After NBC executives cancelled Star Trek in 1969, Nichols went on to star in other roles — and also worked for NASA in a campaign to encourage African Americans to join the space service. Among those she helped recruit was Dr. Mae Jemison, the first African-American woman to fly aboard the Space Shuttle, in September 1992. Jemison has cited Star Trek as an influence in her decision to pursue a career in space. 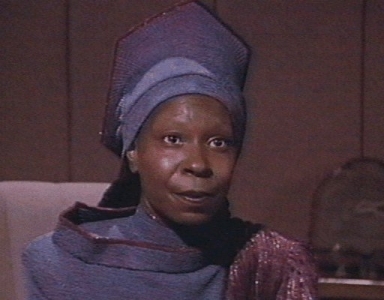 Goldberg: From inspiration to a regular role

Meanwhile, things came full circle for actress Whoopi Goldberg, who was to get her own regular role in Star Trek: The Next Generation whose original run lasted from 1987 to 1994. In this successor series, she played the recurring El-Aurian female character Guinan.

Things have also moved on in the real world, where Barack Obama is now the President of the United States, with Michelle Obama as one of the most influential – if not powerful – women in the world. On 28 April 2009, CNN ran a story titled Why Michelle Obama inspires women around the globe. It noted: “Those who focus on Michelle Obama’s impact on America are underestimating her reach. The first lady is inspiring women of color around the globe to look at themselves, and America, in fresh ways.”

There is no linear link between Nyota Uhura and Michelle Obama, and the real world has very far to go to reach the utopian ideals of Star Trek. But the very fact that we have the Obamas where they are is an assurance that things can slowly move towards Gene Roddenberry’s grand vision.

« Star Trek: Advocating a world of equality, tolerance and compassion
Hitchhiker’s (Rough) Guide to the Media: Who wants a free ride? »
Loading Comments...
%d bloggers like this: