Thai audiences in the dark about ‘Children of the Dark’

Yami no kodomotachi (Children of the Dark) movie poster

Human trafficking – peddling and trading of human beings for slavery, sexual exploitation and servitude – has grown to alarming proportions in recent years. It’s among the top five illicit trades in the world, whose net annual worth is believed to be between 9 billion and 42 billion US dollars. The truth is, nobody knows exactly how big it is, but human rights activists and development agencies agree the problem is pervasive.

Of the estimated 2.5 million persons trafficked worldwide, more than half are in the Asia Pacific. At the UN General Assembly for Children in August 2007, it was reported that about 1.8 million children became victims of commercial sex trade in 2000. About one million children in Southeast Asia are said to be involved – Thailand is one centre of this shady trade, drawing on misery in its rural hinterlands as well as poorer neighbouring countries like Burma, Cambodia and Laos.

So what happens when someone goes to the trouble of studying the issue in depth, and then pools talent and resources to make a feature film that exposes international connections that sustain the child sex industry in Thailand? Instead of being welcomed as part of the effort to counter this scourge, the film gets banned.

Yami no kodomotachi (Children of the Dark, 138 mins, original Japanese) is a Japanese-Thai film made in 2008 about child sex slavery. It has been banned in Thailand on the grounds that it was ‘inappropriate’ and touched on a ‘sensitive’ issue.

I haven’t seen the film, but according to one reviewer who did, Junji Sakamoto‘s film is based on a novel by Yan Sogil and scripted by Sakamoto himself, shows, with a documentary-like directness, how children caught in the web of a Thai prostitution ring are exploited, abused and, in some cases, murdered when they are no longer sexually salable.

Mark Schilling, writing in The Japan Times in August 2008, noted: “…In being so visually graphic — particularly in the sex scenes in the Thai brothel — Sakamoto treads a dangerous line between hard-hitting social drama and stomach-turning exploitation. He takes care never to show his young actors (whose average age looks to be about 10) and their adult ‘clients’ in the same explicit shot, but he films them engaged in sexual acts or their aftermath. Sakamoto may defend these scenes in the name of realism, but could he have filmed similar ones in Japan, using Japanese children? The short answer is “no.”

The Thai ban prevented ‘Children of the Dark’ from being screened at the Bangkok International Film Festival, held in the Thai capital from 23 – 30 September 2008.

“The ban puts under the spotlight the country’s – or at least its higher-ups’ – seeming unwillingness to let go of the Film Act of 1930, when Thailand was still under absolute monarchy. That law gave a Board of Censors the power to impose cuts or to ban a film it deems inappropriate,” writes my friend and colleague Lynette Lee Corporal in an article just published on Asia Media Forum. 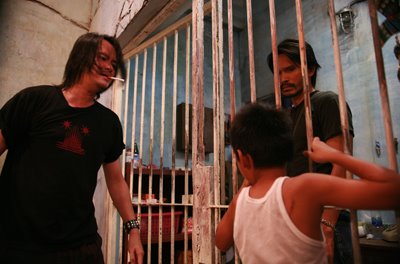 Thailand in denial about its Children of the Dark

She quotes my Thai colleague and documentary filmmaker Pipope Panitchpakdi as saying: “Authorities always think that viewers need to be protected and shielded from real issues. They still have that kind of sentiment that the media should function as a gatekeeper. That is, let the good stories in and the bad ones out. It’s okay in certain circumstances but not when talking about real, serious issues.”

Pipope adds: “This country has no problem with hypocrisy; we don’t see anything wrong with double standards. We have sex workers in corners of the city, but we can’t watch people kissing.”

A Bangkok-based journalist who calls himself Wise Kwai, writing in his blog, asks: “When will they (Thai authorities) learn that when they ban or censor a film, the ensuing stink that’s raised causes more problems than if the film had been allowed to quietly unspool? Perhaps if people had seen it, they might criticise it, but they’d also talk about the problems in society that allow children to be exploited.”