When our Sri Lanka 2048 TV debate series started a few weeks ago, I had no idea that I’d be hosting some programmes. But through an interesting turn of events, I’ve ended up doing just that.

The series, which TVE Asia Pacific is co-producing with IUCN and MTV Channel (Pvt) Limited — Sri Lanka’s ratings leading TV broadcaster — has been going out once every week from 22 May 2008. As I wrote at the time the series started, most programmes (8 out of 10) were hosted by Sirasa TV’s versatile and dynamic presenter Kingsly Rathnayaka.

Our plan was to do two shows in English, exploring the topics living with climate change and the nexus between business and the environment. We were still searching for a presenter for these two even as we produced and aired the Sinhala programmes.

In the end, the channel management as well as our production team all suggested for me to take it on. I’ve been hosting quiz shows on TV since 1990, and have been a regular ‘TV pundit’ on a broad range of development, science and technology issues for at least a decade. I’ve also been doing a fair amount of moderating sessions and panels at international conferences. Hosting Sri Lanka 2048 challenged me to combine all these skills — and to be informed, interested and curious about our topics under discussion.

I enjoyed being the ‘skeptical inquirer’, a role I’ve had fun playing for long years as a development journalist. Our viewers can judge how well I fared. My aim was to keep the panel and audience focused, engaged and moving ahead. My style is slower and more reflective than Kingsly’s fast-paced, chatty one. Direct comparisons would be unfair and unrealistic since we are very different personalities.

But I’m enormously grateful to the younger, more experienced Kingsly for his advice and guidance in preparing for my new role. The TV camera is ruthless in capturing and sometimes magnifying even minor idiosyncrasies in presenters. It has as much to do with style as with substance. Hope I made the grade…

Here’s the promotional blurb for this weekend’s show, titled Business As Unusual (yes, I borrowed the apt title from our sorely missed inspiration Anita Roddick). It was broadcast on Channel One MTV, the English language channel of Sri Lanka’s Maharaja broadcasting group.

Sri Lanka 2048 looks at Business As Unusual: How can companies do well while doing good?

The private sector is acknowledged as the engine of our economic growth. But how long can this ‘engine’ keep running without addressing its many impacts on society and the natural environment? With public concerns rising everywhere for a cleaner and safer environment, how best can businesses respond to the environmental challenges — and find new opportunities to grow and innovate?

These and related questions will be raised in this week’s Sri Lanka 2048, the series of TV debates exploring Sri Lanka’s prospects for a sustainable future in the Twenty First Century. The one-hour debate, this time in English, will be shown on Channel One MTV from 8 to 9 pm on Saturday, 19 July 2008.

Titled Business As Unusual, this week’s debate brings together concerned Sri Lankans from academic, corporate, civil society and government backgrounds to discuss what choices, decisions and tradeoffs need to be made for businesses to become environmentally responsible — and still remain profitable. Increasingly, there are examples of smart companies achieving this balance. 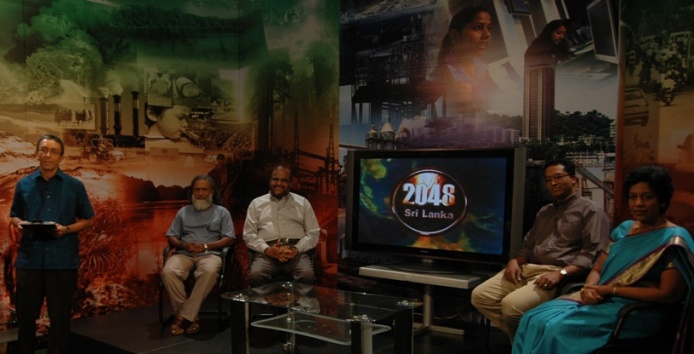 The wide ranging discussion — looking at both domestic and international markets, and covering a range of industries — notes that many companies already address not just financial but also social and environmental bottomlines. Adopting cleaner production practices have helped increase profits through being thrifty with resources and careful with waste.

The debate also looks at the findings of a survey that IUCN and the Ceylon Chamber of Commerce carried out last year of 45 companies on their corporate social responsibility (CSR) policies and practices. It revealed that a significant number of companies are actively applying CSR principles, with slightly over half (53%) already having environmental components in their CSR (known as CSER). The survey also found that local companies were stronger on CSR/CSER than the local operations of multinational companies.

As some panelists and audience members argue, embracing sound environmental practices goes well beyond CSR. With rising consumer awareness and greater scrutiny of how companies source materials and energy, ‘going green’ has become an integral part of responsible corporate citizens.

Sri Lanka 2048 debates are co-produced by TVE Asia Pacific, an educational media foundation, and IUCN, the International Union for Conservation of Nature, in partnership with MTV Channel (Private) Limited. This editorially independent TV series is supported under the Raising Environmental Consciousness in Society (RECS) project, sponsored by the Government of the Netherlands.

Wherever you are, Anita, I hope you were watching our show tonight — and hopefully nodding… When you insisted that businesses must care for community and the environment, you were so ahead of the pack. We’re still struggling to catch up. 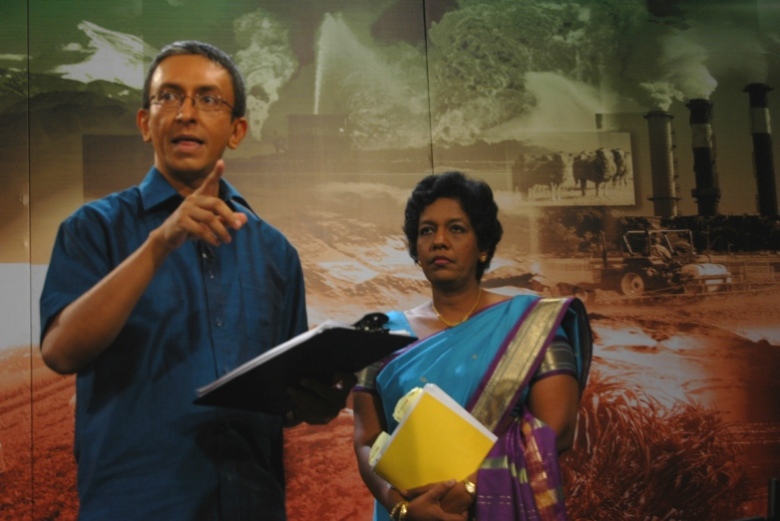 On the set of Sri Lanka 2048: Nalaka with panelist Jeevani Siriwardena

« Al Gore’s challenge to America: kick the oil habit in a decade
JibJab: Perhaps they don’t know that “Barack” means “a blessing”? »
%d bloggers like this: