It’s an earthquake, stupid: Reflections on Virginia’s 5.8 tremble on Aug 23 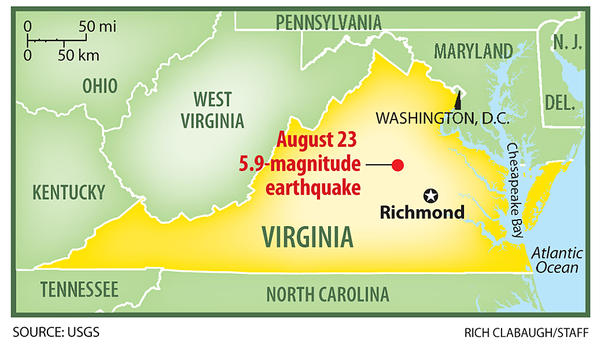 I’ve been travelling for 25 years, but never once experienced an earthquake. Oh, I regularly visit places located in highly seismically active zones: Japan, Indonesia and Nepal among them. However, I’ve never been in the right place at the right time — or should it be ‘the wrong place at the wrong time’?

That was finally corrected with the US East Coast earthquake on 23 August,the last day of my visit to Washington DC, where I’d been staying with a friend in Alexandria, Virginia. Daughter Dhara and I had just finished packing for our long return journey and making ourselves some lunch. Our friends were at work; we were alone with another visitor.

Around 2 pm, and without any warning, the whole house started shaking. The basement made the biggest noise and a cupboard full of glassware next to the dining table rattled quite hard – for a moment I thought it was going to crash forward.

But luckily it didn’t. The noise and vibrations last for about 20-30 seconds. By then I figured that it was an earthquake. We were within a few feet of the front door, so we quick ran outside. Wrong move, we later heard (we should instead have crept under a table and waited for things to settle). But all our neighbours too did the same, rushing out looking all panicked…

Things settled down soon enough, and no further tremours were felt. After a few minutes, we went back inside.

But I was puzzled: the US East Coast is not known to be seismically that active. Yet a few minutes later the US Geological Survey, which monitors earthquakes worldwide, posted an update: this was indeed a magnitude 5.8 quake which was centred in the state of Virginia — the epicentre was only around 50km from where we are at the time. The largest previous earthquake (magnitude 4.8) in this area had occurred in 1875. Smaller earthquakes that cause little or no damage are felt each year or two.

Within an hour of the incident (late by social media standards!), I tweeted: “After 25 yrs of world travel, incl a dozen visits to Japan, I’ve finally experienced a #quake in Virginia, USA. Shaken but not stirred…”

What I didn’t express, until now, is the sense of relief that as quakes go, this was a relatively harmless tremour!

As news started coming in, we heard that the impact had been felt more forcefully in nearby towns and neighbourhoods. Government and corporate offices – including the US Congress and Pentagon (Defence Dept) — evacuated as a precautionary measure. Many shopping malls and other public places closed up in a hurry. The cell phone networks were clogged with too many people calling each other. It was a mild form of panic, something the Californians on the West Coast — so accustomed to tremours in their lives — found amusing.

The US media — perhaps starved of breaking news in the lazy days of Summer — went into overdrive with saturation coverage. Much of it was cacophonous, but some outlets were more informed and measured.

Among the more perceptive pieces was what an op ed that appeared on CNN.com and written by Christa von Hillebrandt-Andrade, manager of the Caribbean Tsunami Warning Program of the U.S. National Weather Service and president of the Seismological Society of America, She noted: “Although seismologists, historians and emergency managers have recognized the potential for an earthquake along the East Coast for years, most people were caught by surprise and so responded inappropriately. The ground doesn’t shake as much in the East as it does in California, Alaska, the Pacific Northwest, Puerto Rico or the Virgin Islands. But because of the great concentration of population and infrastructure in the East, it’s an area of immense risk.”

She added: “Since earthquakes are infrequent in this region, most people don’t know earthquake preparedness measures. Instead of running out of buildings, they should have dropped, covered and held on. Earthquakes are natural phenomena that become disasters when we don’t prepare adequately — or are not educated in proper measures.

“The 2004 tsunami is an example of a rare event catching people unprepared, with catastrophic results. In December of that year, more than 230,000 lives were lost in countries around the Indian Ocean. Residents and tourists were taken by surprise — they were not warned, nor did they recognize the natural signs.”

She also cited the exception to that norm: the British school girl Tilly Smith who was vacationing on a Thai beach that day and recognised the tell-tale signs of the oncoming tsunami. In the wake of the Virginia quake, my Oct 2007 blog post about Tilly has attracted considerable attention.