My friend Kalpana Sharma just stepped down after serving on the Panos South Asia board for over a decade. The Executive Director A S Panneerselvan asked me to write a personalised piece felicitating her. Part of this was read at the annual meeting of the Board held in Dhaka last weekend. Here’s the full essay — a couple of mutual friends who read it say it isn’t too eulogistic! Now you can decide for yourself…

The Curious Ms Sharma of Mumbai

I knew Kalpana Sharma from her by-line long before I met her in person. Now, more than a dozen years after we became friends, she remains an inspiration and a role model. 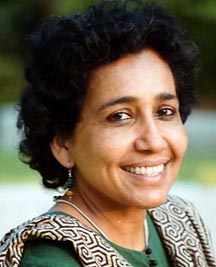 Kalpana has been a path-finder and trail-blazer in journalism that cares. She has set the gold standard in investigating and critiquing development in the Indian media. Today, she continues her nearly four decades of association with the Indian media as a respected columnist, journalist and writer. Her stock in trade is a mix of curiosity, sense of social justice, wanderlust and a deep passion for people and issues. She is living proof that quality journalism can be pursued even in these turbulent and uncertain times for the mainstream, corporatised media.

Kalpana has been covering the ‘other India’ that is largely ignored by the Indian media. Its denizens are some 456 million people living under the global poverty line of $1.25 per day — a third of the world’s poor. (If they declared independence, they would immediately become the world’s third most populous nation.) Kalpana’s reporting from the ‘Ground Zero’ of many disasters and conflict zones has highlighted the multiple deprivations of these people living on the margins of survival.

For many such communities, a headline-creating event is just the latest episode in their prolonged and silent suffering. The media pack that descends on them after a sudden development can’t seem very different from the assorted politicians who turn up periodically during election campaigns. For too long, the grassroots have been treated merely as a grazing ground for stories or votes.

Kalpana doesn’t hesitate to be part of the media pack when duty calls, but once in the field, she sees connections often missed by other journalists looking for a quick sound byte or dramatic image. Unlike some news hounds, she doesn’t exploit the misery of affected people (“Hands up who’s poor, speaks English – and looks good on TV!”). And she returns to the same locations months or years later to follow up.

For all these reasons, Kalpana was our first choice to write the last chapter in a regional book on disasters and media that I co-edited with Indian journalist Frederick Noronha in 2007. Her 2,000-word reflective essay should be required reading for any journalist covering disasters and social disparity in South Asia.

Here is a passage that sums up her views on the subject: “Much of disaster reporting sounds and reads the same because the reporters only see what is in front of them, not what lies behind the mounds of rubble, figuratively speaking. What was this region before it became this disaster area? How were social relations between different groups? What was its history? What were its relations with the state government? Was it neglected or was it favoured? How important was it to the politics of the state?”

Kalpana has been asking such probing questions all her professional life. And it’s not just in the rural hinterland of India that Kalpana has travelled extensively listening and talking to people from all walks of life. Living in the world’s second most populous city Mumbai, she has been equally concerned with its burning issues of urban poverty, gender disparity, environmental mismanagement and governance.

Kalpana once wrote an insightful book about the Dharavi slum in Mumbai, looking at both its social inequalities and the people’s remarkable resilience. Titled Rediscovering Dharavi: Stories from Asia’s largest slum (Penguin, 2000), it was called ‘a model of sane, human, down-to-earth writing’. All this was years before the Oscar-winning movie Slumdog Millionaire (2008) popularised the location through a dramatic tale.

In her quest for untold human stories, Kalpana has taken a particular interest in the plight of poor women. She has written many authentic and moving stories about women who struggle on the margins of the margin. A recurrent theme in her writing is how invisible ‘superwomen’ hold the social fabric together in much of India. Many communities and production systems –ranging from domestic work and child care to waste disposal and farming – would simply grind to a halt if these unseen and unsung women took even a single day off. In reality, of course, they just can’t afford such luxuries.

Kalpana’s column The Other Half, which started in The Indian Express and now appears in The Hindu, is a regular eye-opener. She takes a current topic – from politics, culture, sport or environment — and explores its gender dimensions. She does so by carefully blending facts, personal insights and opinion that makes her writing very different to the rhetorical shrill of gender activists.

Make no mistake: Kalpana is an activist in her own right, and one of the finest in modern India. It’s just that her approach is more subtle, rational and measured – and in the long run, wholly more effective. Long ago, she found how to balance public interest journalism with social activism. This is one more reason why I look up to her.

Partners in crime: Nalaka and Kalpana speaking at the Education for Sustainable Future conference in Ahmedabad, India, January 2005.

In her writing, television appearances and public speaking, Kalpana stays well within the boundaries of good, old-fashioned journalism based on its A, B and C: accuracy, balance and credibility. In my view, she enriches the mix by adding a ‘D’ and ‘E’: depth and empathy. Without these qualities, mere reporting is sterile and dispassionate.

And once we get to know her, we also discover the ‘F’ in Kalpana Sharma: she is a fun-loving, cheerful woman who doesn’t take herself too seriously. We can count on her to be adventurous, enthusiastic and endlessly curious.

Cultivating these attributes would certainly enrich any journalist. I can’t agree more when Kalpana says (in her chapter to a recent book on environmental journalism in South Asia): “Journalists are good or bad, professional or unprofessional. I am not sure if other labels, such as ‘environmental’ or ‘developmental’, ought to be tagged on to journalists.”

I hope Kalpana has no retirement plans. She has earned a break after a dozen years on the Board of Panos South Asia. But we want her to remain a guiding star – a bundle of energy that shines a light into the Darkness, and helps make sense of the tumult and frenzy that surrounds us.

6 Responses to “Celebrating Kalpana Sharma, a super-star of good journalism”

« In praise of slow reading: Let the words go marching by…
Help wanted: Show me (again) how to do nothing at all… »
Loading Comments...
%d bloggers like this: