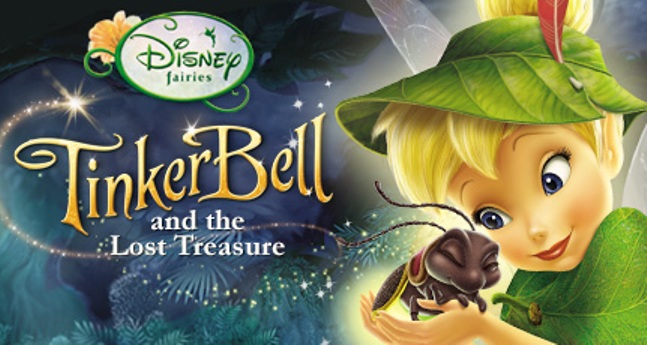 Now she's green inside and out!

I always thought Tinker Bell was a bit green — with envy, that is. Peter Pan’s faithful fairy sidekick was far too possessive of him: every time another female appeared to get close, Tink would try to chase her away. She typifies the Jealous Female.

And now, Tinker Bell is very officially green, too: The United Nations has just named the Disney animated character Tinker Bell an “Honorary Ambassador of Green” to help promote environmental awareness among children.

The announcement came just prior to a screening at UN Headquarters in New York of the world premiere of the Walt Disney animated film, “Tinker Bell and the Lost Treasure.”

In the new movie, being released on DVD and BluRay on 27 October 2009, the feisty fairy first seen in 1953’s Peter Pan classic animation movie finally gets a makeover for her journey away from the magical land of Pixie Hollow.

The new and improved Tink looks more tomboyish: more of her body is covered in clothes, yet she still retains her curvy figure. “We wanted to make Tink as real as possible in Lost Treasure,” says director Klay Hall. “It made sense she was going to put on a jacket, leggings and boots. This is sort of a new phase for Tink, and the look brings her up to the current feeling we are trying to convey,” such as the belt she uses to carry items she needs.

“We’re delighted Tinker Bell has agreed to be our Honorary Ambassador of Green,” said Kiyo Akasaka, Under-Secretary-General for Communications and Public Information. “This beloved animated character can help us inspire kids and their parents to nurture nature and do what they can to take care of the environment.”

The UN event was intended to promote environmental awareness in the lead-up to the UN climate change conference in Copenhagen in December, where countries will aim to ‘seal the deal’ on a new global agreement to curb greenhouse gas emissions.

Protecting the environment is an underlying theme of the Tinker Bell movies, according to the UN Department of Public Information (DPI), which finds that the Walt Disney Company uses its storytelling to inspire a love of nature and spirit of conservation in its audience.

In the latest film, Tinker Bell’s greatest adventure takes place in autumn, as the fairies in Pixie Hollow are busy changing the colours of the leaves, tending to pumpkin patches and helping geese fly south for the winter. When Tinker Bell accidentally puts all of Pixie Hollow in jeopardy, she must venture out on a secret quest to set things right.

The Initiative links the UN and producers, directors, writers and new media professionals seeking a working relationship with the world body with the goal of raising awareness of critical global issues.

Well, I can think of one Big Challenge for the creative community worldwide: find some way, any way, to ‘animate’ (i.e. bring to life!) the chronically dull and dour Ban Ki-Moon, Secretary General of the UN, who in his own admission is often invisible!

But hey, some feats are beyond even the most creative people! So just enjoy these two online videos…

« Vatavaran 2009: Every shade of green under the Sun, converging in New Delhi this week
Pierre Fitter from NEWS-X wins TVEAP Environment Journalist Award 2009 »
Loading Comments...
%d bloggers like this: