Beyond press release journalism: Digging up an environmental business story

“Don’t reproduce press releases from companies, or accept their corporate PR. To get to the real stories, journalists have to dig deeper and work a bit harder.”

Paolo Pietrogrande, Chairman of Atmos Holding, offered this piece of advice when talking to an international group of journalists at the V Greenaccord International Media Forum on the Protection of Nature, held from 7 to 11 Novmeber 2007 in Rome, Italy.

Pietrogrande (seen speaking in photo, below) was talking on ‘new investment scenarios in renewable energy sources’ during a session on sustainable economic mechanisms. A New York based Italian businessman with past experience in Ducati Motor, General Electric, Bain&Company and Ryanair, he suggested that many positive environmental business stories were being overlooked by the media.

According to him, there are billions to be made in clean energy and clean technology sectors in the coming years — and venture capitalists and other investors have already recognised this potential. Real Money is now being invested in these sectors, often below the media’s radar and without any fanfare.

This is not corporate social responsibility (CSR), philanthropy or ‘greenwashing’ PR. These are hard-nosed investors who fully expect good and dependable returns on what they put in. They do due diligence and take expert advice before putting in their billions into such emerging sectors.

Yet, immersed in peddling doom and gloom stories – especially on climate change these days – most media outlets miss out on these stories which have significant business and environmental angles.

His advice to journalists included these tips:
* Don’t look at press/media sections on corporate websites, which is usually full of PR. Even CSR reports are carefully crafted to give a rosy picture. The real stories lie elsewhere.
* Instead, read the annual reports of companies, especially the CEO’s letter to shareholders. That’s a carefully crafted statement and analysis which contains a good deal of information.
* Stop replying on press releases, and certainly don’t get into the habit of recycling them in news stories. Instead, look at public disclosure documents of companies for leads and insights.

The environment has moved way beyond CSR and corporate PR, he said. More and more companies realise how environmental compliance increases their efficiency and thus profitability. Whole new business areas and opportunities are opening up for those working on clean energy and clean technologies. The impetus has come from concerns on global climate change. 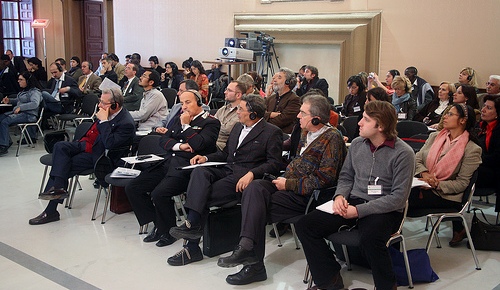 If Pietrogrande sounded a bit like Carl Sagan – talking of billions and billions – that is understandable. He sees vast potential in clean energies and clean technologies that can help reduce carbon emissions causing global warming. Industry has traditionally made profit emitting carbon, and now there is money – and profit – to be made cleaning it up.

Investors are lining up with the money, but good ideas and projects are in short supply, he said.

Which reminded me of something that the American engineer, architect and visionary Buckminster Fuller once said: “There is no shortage of energy on this planet. There is, however, a serious shortage of intelligence”.

« Journalists and scientists seeking Green Accord
Beyond coffee and bananas: We need fair trade in international media! »
%d bloggers like this: