Five extraordinary individuals from as many continents came together in New Delhi on November 27 to be saluted and felicitated for their innovation, determination and pursuit of excellence.

At a gala awards dinner at Delhi’s Taj Palace Hotel, before an audience of leaders and innovators from all over the world, the Rolex Awards for Enterprise were presented to the five 2012 Laureates. They are: Sergei Bereznuk (Russia), Barbara Block (United States), Erika Cuéllar (Bolivia), Mark Kendall, (Australia) and Aggrey Otieno (Kenya).

The Laureates each received 100,000 Swiss francs and a Rolex chronometer. They will also gain substantial recognition and global publicity for their work.

They join 115 other individuals from 42 countries in a growing worldwide community of explorers, researchers and entrepreneurs.

During the two hour ceremony, each winner was profiled in a short video, and invited to make a brief acceptance speech. Their words illustrated how they simply refuse to accept the status quo in their respective fields of work – and strive to change it in different ways.

“Frustration has been a key motivation for me,” said Mark Kendall, a bio-engineer who is developing a ‘Nanopatch’ to replace needles in vaccination. “There are many big problems out there waiting to be tackled. They don’t come neatly packaged. We need to work across cultures and disciplines to solve these.”

“It’s a tragedy that so many women still die giving birth to children in this day and age. I am going to fight this in my own community,” said
Aggrey Otieno of Kenya, who is building a telemedicine centre in a large Nairobi slum to provide women with a lifeline to obstetric medical care.

Conservationist Erika Cuellar of Bolivia is training indigenous people in Bolivia, Paraguay and Argentina to conserve the biodiversity of one of South America’s last truly wild environments, the Gran Chaco.

She said: “Conservation today is highly political, and it’s a constant fight. But hard work and persistence can still make a difference. Nature needs all the allies it can get!”

“We know more about the soils of Mars than about the oceans of our own planet,” said oceanographer Barbara Block of United States, who is tracking marine predators (tuna and sharks) off the North American coast with a series of underwater listening stations.

She added: “By wiring up the ocean and making the data available online, we are hoping to make a personal connection between ordinary people and these lions and tigers of the sea.”

For Sergei Bereznuk of Russia, the biggest conservation battles are fought in the minds of people, especially of children. He is using technology and education targeted at younger people to protect the last Siberian tigers in the Russian Far East.

“I salute the brave wildlife rangers and teaches and other public educators in all tiger countries across Asia who are leading this battle at two fronts,” he said.

The original idea of the Rolex Awards, launched in 1976, was simple: to provide financial help and encouragement to outstanding projects that seek to break new ground and capture the spirit of enterprise. It is a prospective award that supports on-going work, selected from an open and competitive process.

“Anything in the world is possible with the right kind of passion and determination,” said Bertrand Gros, Chairman of the Board, Rolex SA, speaking at the Delhi ceremony.

He added that the Rolex Awards have a special place in the company because they reflect the ethics on which the company was founded — quality, excellence and performance.

The 2012 Laureates were chosen from more than 3,500 applicants from 154 countries by an independent jury of international experts drawn from around the world and across disciplines.

“Our task was a difficult one – we had to assess which ideas could best transform dreams into tangible results,” said jury member Subramaniam Ramadorai, Indian IT specialist who founded and is now vice chairman of Tata Consultancy Services.

The master of ceremonies was the celebrated Indian director Mira Nair, who said she was delighted to be back in the city where her 2001 film Monsoon Wedding is based.

At the end of the ceremony, former Indian tennis star and actor Vijay Amritraj – who served as a global juror for 2010 Rolex Awards – announced five more Young Laureates who will be felicitated in early 2014. They are all young activists or entrepreneurs below 30 already blazing new trails.

This was the first global Rolex Awards event held in South Asia. Previous Rolex Awards presentations have been held in Geneva and Lausanne in Switzerland, and in New York, Tokyo, Singapore, Paris and Dubai. 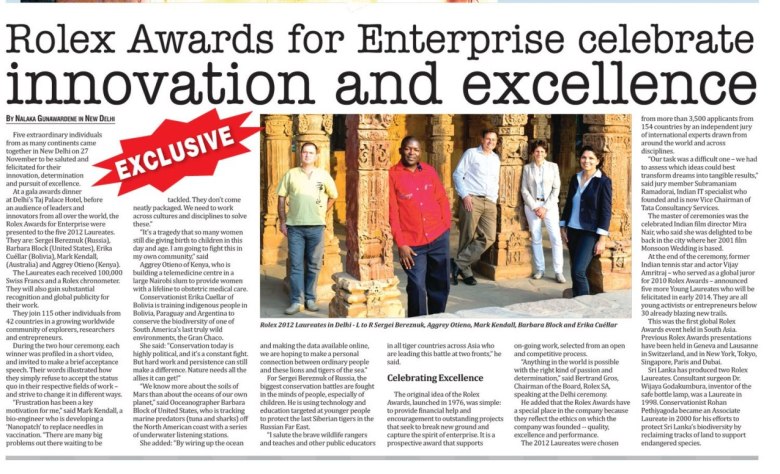 One Response to “Rolex Awards 2012: Celebrating innovation and excellence”