2012: Will End-of-the-World industries end this year?

Simple explanations are always the best - but not entertaining enough?

Citing various ancient lore, some say this year will see the end of the world — where have we heard that before?

The Wikipedia describes the ‘2012 phenomenon’ as comprising a range of eschatological beliefs according to which cataclysmic or transformative events will occur on 21 December 2012.

And to think that a blockbuster Hollywood movie, rather than any ancient prophecy, likely triggered this wave of public concern!

Wikipedia notes: “The 2009 disaster film 2012 was inspired by the phenomenon, and advance promotion prior to its release included a stealth marketing campaign in which TV spots and websites from the fictional ‘Institute for Human Continuity’ called on people to prepare for the end of the world. As these promotions did not mention the film itself, many viewers believed them to be real and contacted astronomers in panic.”

The campaign was heavily criticized by scientists, of course, but the public chose to believe the scary make-believe rather than the more sober reality.

The film 2012 became one of the most successful of that year, grossing nearly $770 million worldwide. So the film’s producers were laughing all the way to their bank…

The US space agency NASA has stepped into the debate with sobering analysis. Its website says: “Impressive movie special effects aside, Dec. 21, 2012, won’t be the end of the world as we know. It will, however, be another winter solstice.”

Recalling the Year 2000 computer bug (Y2K problem) that didn’t quite materialise, it says: “Much like Y2K, 2012 has been analyzed and the science of the end of the Earth thoroughly studied. Contrary to some of the common beliefs out there, the science behind the end of the world quickly unravels when pinned down to the 2012 timeline.”

NASA scientists answer many questions that they are frequently asked regarding 2012.

“I will give 10% of the value of any property to (its) legal owner who will write a deed of sale of their property to me, effective from 22 December 2012, after that owner is so confident the World was going to end on December 21st!”

So far, Kavan has had no takers.

But the hype continues, with the media stirring things up as much as they can: after all, if Hollywood made money from people’s gullibility, why not others?

So might End-of-the-World industries end this year? Not a chance. A sucker is born every minute, and this is one industry that will continue to thrive as long as there are credulous believers. 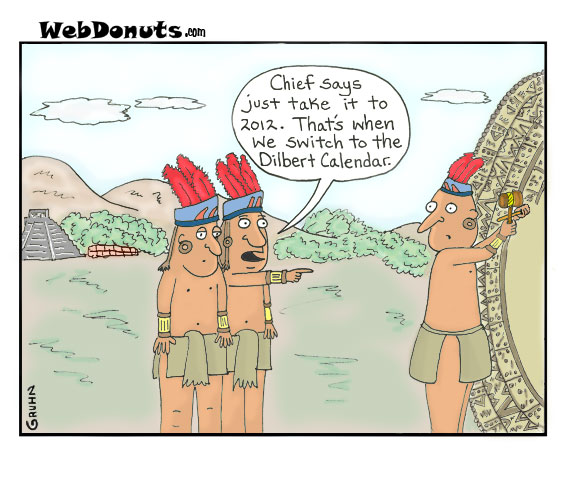 Mayan prophecy - or their sense of humour?

2 Responses to “2012: Will End-of-the-World industries end this year?”