Sarvodaya Leader A T Ariyaratne at 80: Conscience of a Bruised Nation 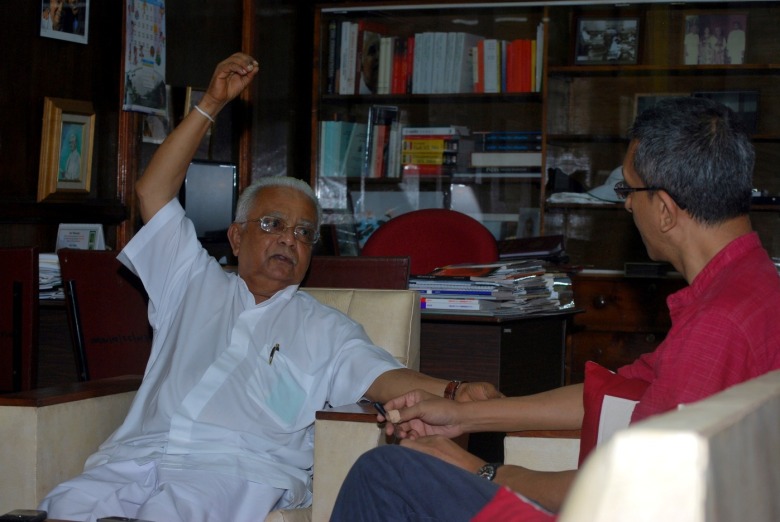 When Dr A T Ariyaratne, founder and president of the Sarvodaya Shramadana Movement of Sri Lanka, turned 80 years on 5 November 2011, felicitations poured in from all over the world. This spontaneous act was an indication — if any were needed — of how much and how widely he has touched the lives of millions.

Ari is also our elder statesman of inclusive development. For over half a century, he and Sarvodaya have advocated a nuanced approach to overcoming poverty, illiteracy and various social exclusions. Unlike some die-hard activists, Ari doesn’t ask us to denounce materialism or revert to pre-industrial lifestyles. Instead, he seeks a world without extreme poverty or extreme affluence.

Suddenly, his quest for social justice and equality is resonating all over the world. In fact, Ari has been speaking out for the 99 per cent of less privileged people decades before a movement by that name emerged in the West. In a sense, those occupying Wall Street and other centres of affluence are all children of Sarvodaya.

While Ari shares their moral outrage, his own strategy has been quite different. He didn’t occupy physical spaces in his struggle; he went straight to the fount of all injustice – our minds.

Thus opens my personalised tribute, published on Groundviews.org as Ari of Sarvodaya: Conscience of a Bruised Nation.

In this 2,400-word essay, I salute a hero of mine who continues to speak truth to power, and makes a difference to millions of people in his land and elsewhere. For doing this, he has been ridiculed, harassed and vilified by small minds and the state. He continues undaunted, and shows no sign of slowing down after turning 80.

“In Ari, we find elements of Mahatma Gandhi (non-violent pursuit of the greater good); the Dalai Lama (interpreting Buddhist philosophy for the modern world); Martin Luther King, Jr. (struggling for the rights and dignity of marginalised people); Nelson Mandela (nurturing democracy and healing society); and Jimmy Carter (globalism with a humanitarian agenda).

“Yet Ari is more than the sum of these noble parts; he is his own unique visionary. And an adroit ‘remixer’ who constantly blends the best of East and West. He adapts our civilisational heritage to tackle the Twenty First Century’s anxieties and uncertainties. Thankfully, though, he doesn’t peddle simplistic solutions to today’s complex problems.”

I also recall my first encounter with Ari, in early 1991, when a tyrant leader of Sri Lanka had virtually declared ‘war’ on this unarmed, non-violent small man. I have interviewed him several times since then – the most recent was in March 2011, when I accompanied my journalist friend Aditya Batra from India to talk to Ari (photo, below).

Read the full essay on Groundviews.org: Ari of Sarvodaya: Conscience of a Bruised Nation

One Response to “Sarvodaya Leader A T Ariyaratne at 80: Conscience of a Bruised Nation”