If a run-away genie granted me a wish to clone any single living human being, I’ll have no hesitation with my choice: Nelson Mandela — undoubtedly the greatest living statesman on the planet.

One might argue that Mandelas are not born; they are made. A combination of personality and historical circumstances create the rare phenomena like him.

In July 2008, when Mandela turned 90, I quoted the American film-maker, social activist and blogger Danny Schechter — who filmed Mandela’s struggle to end apartheid and restore democracy in South Africa — as saying: “He (Mandela) is one of those leaders who not only helped free his own country and people but became an icon and symbol for freedom in the world. At a time when darkness seems to be descending again, with the economy on the edge amidst protracted wars and pervasive abuses of powers, he is the one person that people the world over look to as a symbol of that saying that ‘another world is possible.’ He is not perfect – who is? He has taken great risks, and made his share of mistakes, but the love and adoration he inspires speaks to how special he is – even as he sees himself as part of a collective, a movement…“

The Mandela story has been told many times by many film-makers, writers and journalists. Few other leaders have engaged the popular culture and media’s attention — while both in and out of office — as Mandela has, and with good reason. 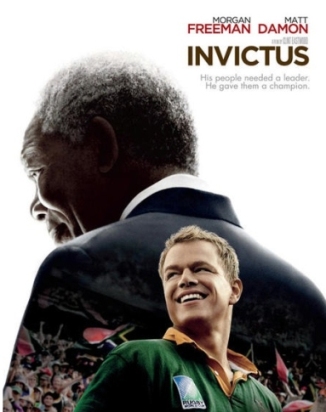 The latest film inspired by Mandela is Invictus directed by Clint Eastwood, starring Morgan Freeman and Matt Damon. Both actors have just been nominated for Oscar awards – for best actor and best supporting actor respectively. But the film’s exclusion from the 10 nominees for best picture has surprised and disappointed some.

Invictus reconstructs the events in the life of Nelson Mandela at a crucial time for himself and country: after the fall of apartheid in South Africa, during his term as the rainbow nation’s first black president. The film revolves around how he campaigned to host the 1995 Rugby World Cup event as an opportunity to unite his rainbow nation. (South Africa’s team eventually won the championship.)

Here’s the plot summary from IMDB:
The film tells the inspiring true story of how Nelson Mandela joined forces with the captain of South Africa’s rugby team to help unite their country. Newly elected President Mandela knows his nation remains racially and economically divided in the wake of apartheid. Believing he can bring his people together through the universal language of sport, Mandela rallies South Africa’s rugby team as they make their historic run to the 1995 Rugby World Cup Championship match.

The film’s title comes from the fact that Mandela had the poem Invictus, by English poet William Ernest Henley, written on a scrap of paper on his prison cell while he was incarcerated. The story is based on the John Carlin book Playing the Enemy: Nelson Mandela and the Game That Changed a Nation. 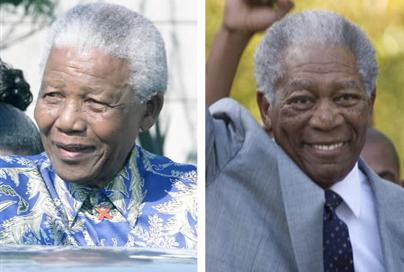 A legend plays another legend

I can’t wait to see Invictus, for it has one of my favourite actors playing one of my greatest heroes. Morgan Freeman is such a versatile and accomplished actor. Having played the US President and God in past movies, this is clearly cut out for him.

As Clint Eastwood explains: “As an actor, Morgan has the same presence when he walks in the room that Mandela has as a politician. Morgan has a certain bearing and charisma. He was built to play this role.”

The Guardian (UK) preview noted: “So convinced by Freeman’s performance was Mandela’s personal assistant that when she stepped on set, she wondered how her boss had made it to the shoot without her. Freeman plays Mandela with all the expected wisdom and fortitude, but it’s the twinkle of mischief in his eye that makes you feel you’re not just watching the man, rather than a virtuoso impression.”

The Guardian calls Invictus “a startlingly powerful film: a clear-eyed look a recent history, an awe-inspiring tale of prejudice overcome, a study of power – and a rousing sports movie.”

Note: In the movie, Mandela gives the “Invictus” poem to his national rugby team’s captain Francois Pienaar before the start of the 1995 Rugby World Cup. In reality, Mandela provided Pienaar with an extract from Theodore Roosevelt’s “The Man in the Arena” speech from 1910.

« Invictus, by William Ernest Henley: Never say die!
‘Avatar’ unfolds in the Amazon: Find out the Real Price of Oil! »
Loading Comments...
%d bloggers like this: