Palitha Perera: The man who refused to be His Master’s Voice 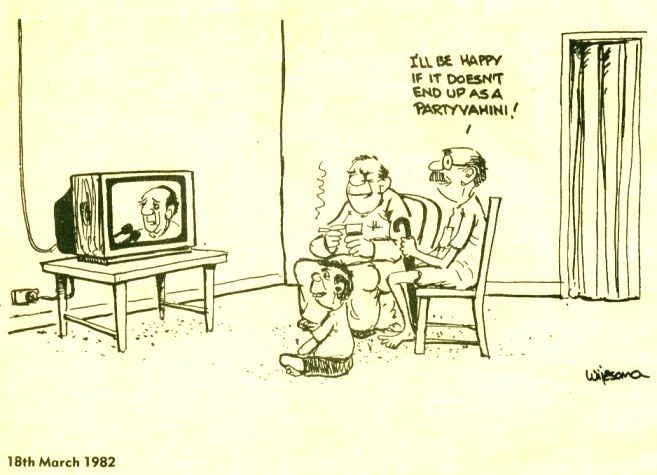 Doyen of Sri Lankan cartoonists, Wijesoma, saw it all coming (courtesy: The Island)

This cartoon is more than a quarter of a century old. It was drawn by W R Wijesoma, the doyen of Sri Lankan political cartoonists, in March 1982 — barely a month after Sri Lanka’s national television broadcaster Rupavahini commenced its transmissions.

I was a school boy in my mid teens when this happened, but I remember the story behind the cartoon. It was Sri Lanka’s first executive president J R Jayewardene who inaugurated the national TV station, which was donated to Sri Lanka by the Japanese government as part of its large package of aid to the island nation. At the inauguration, JR (as everyone called him) made this lofty speech, where he expressed his hope that Rupavahini would also be a satyavahini (meaning: the picture tube should also dispense the truth).

In practice, that presidential wish never had a chance. JR was in office from 1978 to 1989, and Rupavahini’s fledgling years coincided with his second term. Despite his ideals, his own government misused the new medium from almost day one for blatant, partisan propaganda. In the event, it was my old colleague Wijesoma’s vision of a ‘party-vahini’ (a propaganda vehicle for party in office) that became our sad, stark reality. Some have also called it pacha-vahini (dispenser of lies).

I recall all this on World Television Day, 21 November, because I’ve been reading a very interesting book by a remarkable man who was associated with Rupavahini’s inauguration. His name is Palitha Perera, and he is one of the most senior and respected radio and TV broadcasters in Sri Lanka today. Among other feats, Palitha holds the distinction of having been the inaugural announcer on two Sri Lankan TV channels – Rupavahini (15 February 1982) and TNL TV (21 July 1993).

Palitha has recently penned his first book, titled Palitha Perera Samaga Sajeeva Lesin (Live with Palitha Perera; Surasa Books, Colombo; 2008). It’s not written in the ‘been-there, done-that’ style of self importance. True, it has a rich sprinkling of autobiographical details expressed in Palitha’s lucid, entertaining writing style. But in recalling men and matters, and his own multiple roles in shaping events, he is both modest and moderate -– hallmarks of his professional career.

As I note in a book review published today on Groundviews.org: “His reminiscences provide some unique insights into our broadcasting history for nearly half a century. He chronicles little known facts and praises unsung heroes. In doing so, he offers a ringside account of the progress — and decline — of state broadcasting in Sri Lanka from the early 1960s to the present.”

Palitha is one of the few broadcasters who successfully moved from radio to television broadcasting. Many other announcers, interviewers and producers of the radio era failed to make that leap, for the two media are different.

In fact, Palitha has been in broadcasting longer than I’ve been alive. I grew up in the 1970s listening to Palitha’s deep, clear and friendly voice. He was Sri Lanka’s pioneering cricket commentator in Sinhala and that’s how he has had the greatest impact on our culture and society.

As I say in the review: “Here we have, straight from the original source, the story of how cricket became the de facto national past-time, if not our national addiction or religion! Like it or hate it, cricket is an integral part of our popular culture. Radio (and later TV) cricket commentaries take much of the credit (or blame, in some people’s view) for building up this uncommon fervour that occasionally unites our otherwise utterly and bitterly divided nation.”

Palitha has also made his name as the country’s foremost interviewer on both radio and television. In his time, Palitha has interviewed dozens of public figures from Presidents and prime ministers to social activists and trade unionists. He is always prepared and well informed. He remains calm and friendly at all times, yet is dogged in his questioning. This style has exposed many a hypocrite and charlatan.

Unlike many other broadcasters who have cheer-led governments prostituting the airwaves, a public property, Palitha Perera never lost sight of who his real masters were: the audience.

Read my full review on Groundviews

5 Responses to “Palitha Perera: The man who refused to be His Master’s Voice”

« Anyone can make video film, right? Why do we need professionals?
Moji Riba: Capturing oral history in moving images »
%d bloggers like this: