Arthur C Clarke autographing all the way to the Great Beyond….?

Among all these, one of the wittiest and funniest was this cartoon by Gihan de Chickera, appearing in Daily Mirror, Sri Lanka, on 20 March 2008. 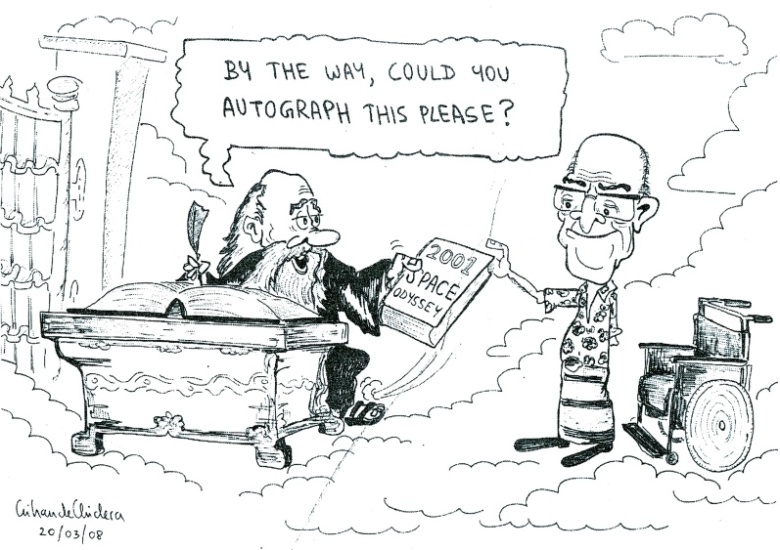 Gihan said it with a brilliant economy of words that Sir Arthur would surely have approved. In fact, Sir Arthur was a regular reader of the Daily Mirror (Colombo) right up to his death.

As someone who was part of Sir Arthur’s personal office for two decades, I can confirm how willingly and gladly he accommodated requests for autographs. If anyone bought a book of his, that was reason enough to sign it, the late author used to say.

He was aware that not all requests for signatures and book autographs were from genuine personal collectors. Some of them ended up being auctioned on eBay and other online trading platforms. That didn’t dampen Sir Arthur’s willingness.

In fact, he used to joke about it all, saying: “I have this vision that one day in the future, there’s an auction where a rare un-autographed Arthur Clarke book sells for an outrageous price!”

Purists might point out to our cartoonist that there’s a certain incongruity of Arthur C Clarke turning up in Heaven. He didn’t believe in an after-life of any kind – but was famously quoted as saying ‘I don’t believe in God, but I’m very interested in meeting Her!‘

Ah, to be a fly on the Heavenly walls when that encounter happens…

2 Responses to “Arthur C Clarke autographing all the way to the Great Beyond….?”