This week I’m working from home, as I nurse a cold that came from nowhere and knocked me down.

I have to take plenty of rest as my body battles the virus. So I alternate between bed and desk, keeping up with at least some of my work.

And that’s not as difficult as it once was, thanks to my home ADSL connection. (For sure, its day-time speeds make it more like ‘fraudband’ and not the broadband that it’s marketed as, but hey, at least I’m connected to the world.)

So this week I have practised a slogan that Sir Arthur C Clarke — inventor of the communications satellite and inspiration for the World Wide Web — suggested over some four decades ago: Don’t commute; communicate!

Well, that’s old hat — probably older than myself. But that assumes a new significance with the current concerns about climate change and how we may adapt our lifestyles to be more climate friendly, i.e. emit less carbon dioxide and other gases that trap the sun’s heat and warm up the planet. 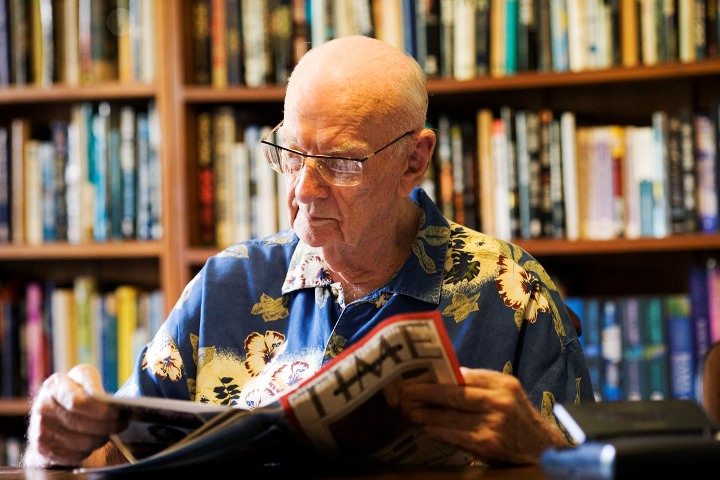 Trust Sir Arthur to make that link ahead of many others. In a short essay written for the UK’s Climate Group in 2005, included as part of a global exhibit on climate issues, he noted:

“In 1973, when OPEC started to multiply oil prices, I rashly predicted: ‘The age of cheap power is over – the age of free power is still 50 years ahead.’

Three decades on, there are promising signs that we may soon get close to that ideal. There is a real possibility that the most important event of the early 21st century will be the advent of unlimited amounts of clean energy. Does it really matter whether hydrogen or nuclear fusion or another technology will finally liberate us from our current addiction to fossil fuels? Meanwhile, other technologies enable us to adjust our work and lifestyles. For example, mobile phones and the Internet have already cut down a lot of unnecessary travel – and this is only the beginning. We should revive a slogan I coined in the 1960s: ‘Don’t commute – communicate!’”

Self evident as this might seem, it’s not a point that is appreciated widely enough.

On 30 October 2006, the UK government published a 579-page report on the economics of climate change by Sir Nicholas Stern, a former chief economist at the World Bank. Despite the massive size, scope and authority of the report, the Stern Report had no reference to the role that the ICT sector could play in helping to reduce energy demand, mitigate CO2 emissions and help to save the planet.

Fortunately, others are taking note. Among them is the European Telecommunications Network Operators’ Association (ETNO), which issued a report — incidentally, in the same month as the Stern Report — titled Saving the climate @ the speed of light: ICT for CO2 reductions.

It was a joint publication with the World Wide Fund for Nature, WWF. Its introduction read: “A wider usage of ICT-based solutions can play an important role in reducing CO2 emissions. This joint WWF-ETNO road map proposes a concrete way forward for a better consideration and inclusion of ICT’s in EU and national strategies to combat climate change.”

And guess what, there is already a movement: ICT for carbon dioxide reduction, inevitably abbreviated as ICT4CO2R!

PS: I must admit that my carbon emission savings by working from home are pretty modest. I live about a kilometre from my office, so my personal commuting to and from work does not entail much of fossil fuel burning. On a good day, I can walk to work…

« Faecal Attraction: There’s no such thing as a convenient flush…
Earthcare Outreach: taking moving images to the grassroots »
%d bloggers like this: