Saneeya was a journalist who took a special interest in environment and human rights issues. All her working life, she campaigned tirelessly for a cleaner, safer and more equitable society for everyone — not just in her native Pakistan, but everywhere.

Ironically, it was the urban nightmare that we have collectively created that finally snatched her away at the prime of her career. She was 51.

I first met Saneeya when we both worked for the same global organisation – IUCN, The World Conservation Union. She headed IUCN Pakistan’s Communication Division while I started a similar division for IUCN in Sri Lanka in the early 1990s. In fact, the trails she and her team had blazed in Pakistan was a model and inspiration for us.

In 1998, Saneeya moved to Cape Town in South Africa to work with the World Commission on Dams, an independent group of experts that had a tough mandate: consult widely to resolve the controversial issues associated with large dams. When the Commission held its South Asia consultations in Colombo, Sri Lanka, Saneeya approached us at TVE Asia Pacific to handle all the media relations.

It was while working in Cape Town that Saneeya met Luis Ferraz, a Brazilian geographer, whom she married later.

In 2002, Saneeya became the Executive Director of Panos South Asia, a regional media organisation with its headquarters in Kathmandu, Nepal. As a Board member of Panos, I worked closely with Saneeya in a number of projects and activities.

Although everyone at Panos and in Kathmandu liked her, Saneeya’s stay there was cut short by what her successor at Panos, A S Panneerselvan, called her Siamese twin: asthma.

It was asthma that forced Saneeya to leave Nepal – and the Panos director’s job – as she just couldn’t cope with Kathmandu’s polluted air. As a fellow asthmatic, I fully empathised with her. She moved to Sao Paulo, where she set up what was to be her final home.

What happened in April 2005 has been written and discussed widely by Saneeya’s far-flung network of friends in the past two years. I can only reproduce the last few paras of a tribute I wrote in May 2005, which was privately circulated at the time:

When Saneeya suffered an acute attack of asthma in Sao Paulo on April 7, her husband Luis rushed her to hospital in his car. It was rush hour at 6.30 in the evening, and it took him 20 minutes to drive to the hospital only 2 kilometres away. Saneeya — who had walked to the car — stopped breathing five minutes into the journey. Luis drove as fast as the traffic would allow him, but as it turned out, not nearly fast enough.

Her brain suffered too much damage due to oxygen deprivation, and she never recovered.

As Luis was to remark later, it was not asthma but the traffic that killed Saneeya.

Similar tragic scenarios unfold on South Asia’s mean streets every day. Heart and stroke patients fail to reach help in time. Ambulences and fire engines, with their sirens blaring, only manage to proceed at a snail’s pace. It’s not uncommon for expectant mothers in labour to give birth on their way to hospitals. Then there is the slow, insidious poisoning that goes on 24/7.

So let us be forewarned. If the air pollution doesn’t get us, the traffic jams will. And if we survive both, our road accidents will wait for us. It’s only a matter of time.

Not one but several serial killers are out there.

And we unleashed them all. 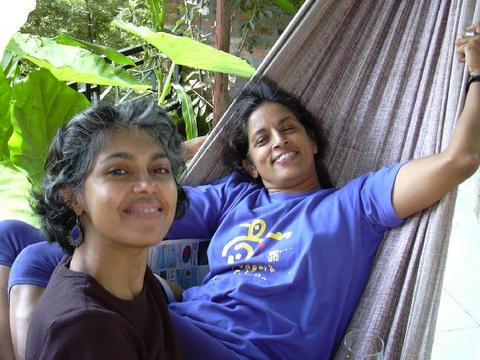 Our mutual friend Beena Sarwar (in the photo above, with Saneeya) has made a 14-minute documentary called Celebrating Saneeya. It was screened at the 5th Karachi International Film Festival in December 2005.

See also my essay ‘Grappling with Asia’s Tsunami of the Air’ (December 2006).

All photos from Saneeya Yahoo Group that links her friends around the world.