When the Twerms Came: The PLAYBOY Comic Strip is found!

Wow, isn’t the Facebook a great place to connect people, ideas and creativity? I never thought much about it, but maybe I ought to spend more time there…

Yesterday, I published a semi-serious essay called WikiLeaks, Swiss Banks and Alien invasions, which was about an obscure short story by Arthur C Clarke describing an unlikely alien invasion of the Earth. For once, the invaders used brain and cunning rather than fire power, and against this onslaught, our planet’s rulers had no defence…

I mentioned how PLAYBOY Magazine had used that story as the basis for a psychedelic comic strip illustrated by the American underground cartoonist Skip Williamson. At the time of writing, I had not been able to locate the comic strip that was published in their issue of May 1972. I wondered: “…it’s either behind a pay-wall, or lies somewhere with little or no indexing by search engines.”

Turns out to be the latter. In less than 24 hours, there was a response from Skip Williamson himself saying the artwork is on his Facebook page, http://www.facebook.com/skip.williamson.

Many thanks to Skip Williamson for posting the link…and while at it, for all his brilliantly cheeky and subversive creations over the years! I hope he doesn’t mind my reproducing the comic strip (all of 2 pages) below:

When the Twerms Came - Comic Strip page 2 of 2

Most Earthlings have just spent a month on this!

“If you’re an alien planning to invade the Earth, choose July 11. Chances are that our planet will offer little or no resistance.

“Today, most members of the Earth’s dominant species – the nearly 7 billion humans – will be preoccupied with 22 able-bodied men chasing a little hollow sphere. It’s only a game, really, but what a game: the whole world holds its breath as the ‘titans of kick’ clash in the FIFA World Cup Final.

“Played across 10 venues in South Africa, this was much more than a sporting tournament. It’s the ultimate celebration of the world’s most popular sport, held once every four years. More popular than the Olympics, it demonstrates the sheer power of sports and media to bring together – momentarily, at least – the usually fragmented and squabbling humanity.”

This is the opening of my latest op ed essay, which appears in several print and online outlets this weekend. It’s timed for the finals of the FIFA World Cup 2010 – the most widely followed sporting event in the world, which will be played in Soccer City, Johannesburg, South Africa today, 11 July 2010. The Netherlands will meet Spain in this culmination of international football that has been distracting a good part of humanity for a month.

This sporting event is tipped to be the most-watched television event in history. Hundreds of broadcasters are transmitting the World Cup to a cumulative TV audience that FIFA estimates to reach more than 26 billion people. Some TV channels offer high definition (HD) or 3-D quality images to enhance the mass viewing experience.

The essay was written a few days ago, after the FIFA World Cup 2010 had reached the semi-finals stage. To be honest, I’m not an ardent football fan. But as an observer of popular culture, I’ve gladly allowed myself to be caught up in the current football frenzy. I just love to watch people who watch the game…

It’s a light piece written to suit the current global mood, but I acknowledge that the World Cup is really more than just a ball game. The basic thrust of my essay is to comment on the powerful mix of fooball and live coverage: “For the past month, the winning formula for unifying the Global Family seemed to be: international football + live broadcasts + live coverage via the web and mobile phones.”

Groundviews.org: Beam Me Up to Planet Football

The essay builds on themes that I’ve already explored on this blog – for example, how President Nelson Mandela used the 1995 World Cup Rugby championship to unite his racially divided nation, as told in the movie Invictus.

I also touch on FIFA being a wielder of formidable soft power in the world today, arguably more influential than the United Nations.

Here’s my parting thought, on which I invite reader comment: “On second thoughts, those invading aliens don’t need to worry too much about the Earth’s political leaders or their armies. Without firing a single shot, the globalised media have quietly taken over our Global Village — and now it’s too late to resist! We can argue on its merits and demerits, but the facts are indisputable.”

When worlds collide: A funny thing happened on my way to this blog… 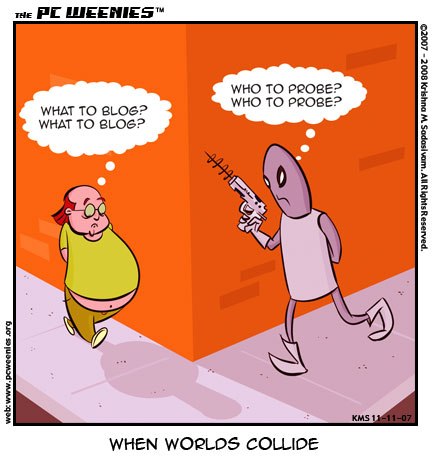 This blog has been silent for over two weeks at a stretch, which is unusual. A few regular readers have enquired as to why.

Well, I’ve been busy on other fronts – some online, others offline. Many years ago, a journalist friend of mine – herself an early adopter of information technologies – cautioned how time-consuming and addictive this medium can be. “Sometimes networking can mean not working,” she said. That’s still true, unless our bread-and-butter is earned entirely online. Conversely, working offline can mean being away from social networking online. You get the idea…

But I digress. The real reason for my not blogging is a lot more interesting – I only wish I could disclose it, but inter-galactic peace depends on my silence. I hope you understand.

This cartoon will give you a hint. ‘When worlds collide’ is one of my favourite phrases, and it seems to be happening to me a little too often. (Disclaimer: I don’t look anything like the blogger in this cartoon.)

The PC Weenies is a popular webcomic with a special focus on technology humour and geek culture, as experienced through the lives of the fictitious Weiner family. The PC Weenies was created and launched on the web in October 1998 by Krishna M. Sadasivam, a former electrical engineer.

Arthur Clarke and Marconi: Waiting for the ultimate phone call

In view of the World Telecommunication and Information Society Day (May 17), I would like to share a short essay I wrote in early April 2008.

Waiting for the ultimate phone call
by Nalaka Gunawardene

Sir Arthur C Clarke was a true believer all his life, who ardently wished for a sign from the heavens. Alas, he never received one up to his death on March 19.

No, this had nothing to do with religion, a notion Clarke publicly dismissed as a dangerous ‘mind virus’. Rather, it’s the prospect of life elsewhere in the cosmos – an idea that always fascinated him, and on which he wrote many stimulating stories and essays.

It wasn’t surprising, then, that this topped the three ‘last wishes’ Clarke mentioned in a short video released in December 2007, on the eve of his 90th birthday.

“I would like to see some evidence of extra-terrestrial life,” Clarke said, wistfully. “I have always believed that we are not alone in the universe. But we are still waiting for ETs to call us – or give us some kind of a sign. We have no way of guessing when this might happen – I hope sooner rather than later!”

Watch the video on TVE Asia Pacific channel on YouTube:

That ultimate ‘call’ never arrived in time for Clarke. And we have no way of telling which of his wishes would materialize first (the other two being adopting clean energy sources worldwide, and achieving peace in Sri Lanka, where he lived for over half a century).

When it came to ETs, Clarke had a good idea of the probabilities of a positive result in his own lifetime. He knew how it had eluded at least four generations of seekers, including the inventor of radio telegraph itself.

Accepting the Marconi Prize and Fellowship in 1982, Clarke recalled how Guglielmo Marconi had been interested in this prospect. He quoted from a letter he (Clarke) had written to the editor of the BBC’s weekly magazine, The Listener, in February 1939: “…On other planets of other stars there must be consciousness; on them there must be beings with minds…some far more developed than our own. Wireless messages from such remote conscious beings must be possible.”

The letter, sent via the then fledgling British Interplanetary Society, ended as follows: “The only time I met Marconi, he told me of his search for such messages. So far, we have failed to find them.”

After a century of radio and 60 years since its inventor’s death, such proof has yet to be found. However, as Carl Sagan – possibly the best known proponent of the subject – was fond of saying, the absence of evidence is not evidence of absence.

Clarke not only wrote and talked passionately about the subject for decades, but also supported – in cash and kind – various groups engaged in the search for extra-terrestrial intelligence, or SETI.

“SETI is the most important quest of our time, and it amazes me that governments and corporations are not supporting it sufficiently,” he said in a 2006 letter supporting public donations to the SETI@Home project at the University of California, Berkeley.

In the early 1990s, he applauded Steven Spielberg, director of ET: The Extra-Terrestrial (1982) for donating US$ 100,000 to SETI efforts. “It seems only appropriate that Steven…should put his money where his mouth is,” Clarke noted.

Clarke welcomed ET‘s box office success, as it departed from the Hollywood tradition of depicting aliens as malevolent. By showing a highly intelligent being as both benign and vulnerable, the movie stretched the public’s imagination to consider other possibilities. Not all aliens would arrive here to take over our world -– or to serve humanity, medium rare…

But Clarke realised how the vastness of space would make inter-stellar travel difficult and infrequent. It was more likely that signals from advanced alien civilisations would roam the universe at the speed of light.

Together with his long-time friend Carl Sagan, Clarke explored the philosophical implications of SETI – and its eventual success. It should be the concern of every thinking person, he said, “because it deals with one of the most fundamental questions that can possibly be asked: what is the status of Homo sapiens in the cosmic pecking order?”

Clarke believed the detection of intelligent life beyond the Earth would forever change our outlook on the Universe. “At the very least, it would prove that intelligence does have some survival value – a reassurance that is well worth having after a session with the late night news.”

Clarke speculated that ETs may be continuously broadcasting an easily decoded “Encyclopaedia Galactica” for the benefit of their less advanced neighbours. “It may contain answers to almost all the questions our philosophers and scientists have been asking for centuries, and solutions to many of the practical problems that beset mankind.”

He was sometimes ambivalent about the value of such an influx of new knowledge, noting that even the most well intentioned contacts between cultures at different levels of development can have disastrous results – especially for the less advanced ones. He recalled how a tribal chief once remarked, when confronted with the marvels of modern technology: ‘You have stolen our dreams’.

But Arthur C Clarke the perennial optimist continued: “I believe that the promise of SETI is far greater than its perils. It represents the highest possible form of exploration. And when we cease to explore, we’ll cease to be human.”

Clarke’s interest in ETs remained undiminished to the end. In his last media interview, given to IEEE Spectrum in January 2008 from his hospital bed in Colombo, Sri Lanka, he said: “I’m sure the ETs are all over the place. I’m surprised and disappointed they haven’t come here already… Maybe they are waiting for the right moment to come.”

He added, with a chuckle: “And I hope they are not hungry!”