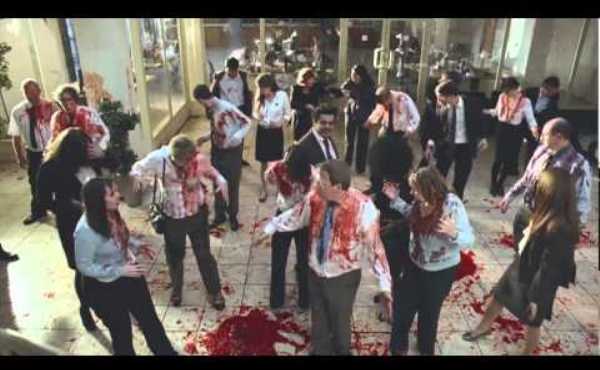 Still from No Pressure film: We do live in The Age of Stupid!

Shock therapy is known to work, when handled carefully. We can sometimes shock people out of apathy or indifference, for sure — but the same shock, if overdone, can also numb people or turn them off completely.

That’s certainly the case with a new climate advocacy video film called No Pressure, released on 1 October 2010 by the by the climate mitigation campaign named 10:10.

Written by Richard Curtis and Franny Armstrong (who made the acclaimed 2009 climate documentary, The Age of Stupid) and directed by Dougal Wilson, the film is a tragi-comic attempt to ridicule those who don’t share the same level of concern on global climate change as the climate activists do.

The four-minute film consists of a series of short scenes in which groups of people are asked if they are interested in participating in the 10:10 project to reduce carbon emissions. Those failing to show sufficient enthusiasm for the cause, including two schoolchildren, are gruesomely executed by being blown to pieces.

Well, see for yourself. Caution: this video contains violent scenes that can be offensive to most sensible people:

The normally balanced UK’s Guardian newspaper, which got the online exclusive, introduced the video on 30 September 2010 calling it “attention grabbing” and “pretty edgy.” There were a few others who found artistic or creative merit in the film, which has got high production values — no basement production, this.

But where it fails miserably is in winning any new friends for the climate cause, or at lease to influence people to change their high carbon lifestyles. 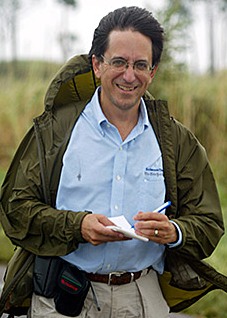 As Andrew Revkin, who writes the Dot Earth blog for the New York Times, wrote on 1 October: “If the goal had been to convince people that environmental campaigners have lost their minds and to provide red meat (literally) to shock radio hosts and pundits fighting curbs on greenhouse gases, it worked like a charm.”

He isn’t alone. Bill McKibben, author, educator and environmentalist — who founded the serious climate group 350.org — wrote on the same day: “The climate skeptics can crow. It’s the kind of stupidity that hurts our side, reinforcing in people’s minds a series of preconceived notions, not the least of which is that we’re out-of-control and out of touch — not to mention off the wall, and also with completely misplaced sense of humor.”

His group, 350.org, issued a statement that emphatically said they had nothing to do with this misplaced British climate extremism. McKibben added, more reflectively: “What makes it so depressing is that it’s the precise opposite of what the people organizing around the world for October 10 are all about. In the first place, they’re as responsible as it’s possible to be: They’ll spend the day putting up windmills and solar panels, laying out bike paths and digging community gardens. And in the second place, they’re doing it because they realize kids are already dying from climate change, and that many many more are at risk as the century winds on. Killing people is, literally, the last thing we want.” 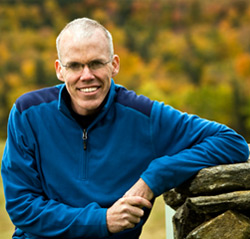 Now contrast such concern with the initial reaction from British film maker Franny Armstrong, who wrote a half-hearted, almost defiant apology on the 10:10 UK website, saying: “With climate change becoming increasingly threatening, and decreasingly talked about in the media, we wanted to find a way to bring this critical issue back into the headlines whilst making people laugh. We were therefore delighted when Britain’s leading comedy writer, Richard Curtis – writer of Blackadder, Four Weddings, Notting Hill and many others – agreed to write a short film for the 10:10 campaign. Many people found the resulting film extremely funny, but unfortunately some didn’t and we sincerely apologise to anybody we have offended.”

Adding gross insult to injury, Armstrong signed off saying: “As a result of these concerns we’ve taken it off our website. We won’t be making any attempt to censor or remove other versions currently in circulation on the internet.”

Both the 10:10 UK campaign and its sponsors Sony have been more unequivocal in their apologies in the days that followed. But that’s too little, too late. Enough damage done — climate activists and campaigners worldwide will take months, if not years, to live down this one.

And nothing really goes away on the web — this video will be lurking somewhere for a long time. YouTube currently carries the video in several places, with the warning: “This video or group may contain content that is inappropriate for some users, as flagged by YouTube’s user community.”

Andrew Revkins has posted comments from those who condemned as well as those who found some merit in the offensive climate video. Some of these comments take a dispassionate view, which is to be welcomed.

This incident teaches all of us engaged in environmental communication some important lessons. Environmentalists have over-stated their case before, and every time, that did them (and their causes) far more harm than good. Crying wolf, and ridiculing the non-believers, are never good tactics in winning friends or influencing people.

As Bill McKibben noted: “There’s no question that crap like this (video) will cast a shadow, for a time, over our efforts and everyone else who’s working on global warming. We’re hard at work, as always, but we’re doing it today with a sunk and sad feeling.”

One more thing: even in this age of globalised media, humour doesn’t travel well across cultures and borders. As mainstream corporate media companies have often found out, British humour sometimes doesn’t even cross the Atlantic very well — let alone to other parts of the world. Perhaps this is a key point that this all-British team of film makers and campaigners simply missed.

The world is a bit bigger — and more diverse — than your little island, Ms. Armstrong. By failing to grasp that, and with your crude display of insensitivity, you have really proved the premise of your good climate film.

We do live in the Age of Stupid.

PS: Marc Roberts says it all in this cartoon:

Climate in Crisis and planet in peril – but we’re squabbling over copyrights!

Climate in Crisis - a global documentary

On my recent visit to Tokyo for a regional workshop on changing climate and moving images, I watched a number of excellent documentary films on the subject. One of them was Crude: The Incredible Journey of Oil, the excellent Australian film that I wrote about in March.

Another was Climate in Crisis, an outstanding global documentary in two parts (2 x 52 mins) co-produced in 2006 by Japan’s public broadcaster NHK together with The Science Channel and ALTOMEDIA/France 5.

Directed by Fujikawa Masahiro, the film draws heavily on the Earth Simulator — one of the world’s most powerful supercomputers — which Japanese scientists used to project the climatic disasters in next 100 years. The system was developed in 1997 for running global climate models to evaluate the effects of global warming and problems in solid earth geophysics. It has been able to run holistic simulations of global climate in both the atmosphere and the oceans — down to a resolution of 10 km.

The results, captured in this documentary, are truly mind-boggling. Atmospheric temperatures may rise by as much as 4.2 degrees Celsius, more hurricanes may attack and deserts may spread from Africa to southern Europe, and half of the Amazon rainforest may be gone. Climate in Crisis shows a severe projection on environmental destruction based on rigorous scientific data and considers whether humankind can avoid this.

This film, made in the same year as Al Gore’s Oscar-winning film An Inconvenient Truth, has won several awards including the Earth Vision Award at the 15th Earth Vision Tokyo Global Environmental Film Festival.

I was curious why this excellent film – in my view, better made than Al Gore’s one – hasn’t been more widely seen, talked about and distributed. To be honest, I’d not even heard of this one until my Japan visit — and I try to keep myself informed on what’s new in my field of endeavour.

The reasons soon became apparent: copyright restrictions! The co-producers are keeping the rights so tight that only the highest bidders will be allowed to acquire it on a license fee.

This is a standard broadcast industry practice that didn’t surprise me. But I was taken aback by how jealously the rights are guarded. All other films that were part of our event, including high budget commercial productions like Crude, were screened to the public at the Parthenon in Tama New Town in Tokyo.

Not so with Climate in Crisis, which we – the overseas participants to the workshop – had to watch at a theatre inside NHK’s Tokyo headquarters. No public screening was possible. As we later heard, NHK itself was willing to allow a public screening (after all, it draws a good part of its income from the Japanese public), but their international co-producing partners, especially the Science Channel, would simply not agree to it. Wow.

Twenty centuries ago, emperor Nero fiddled while Rome burned. Today, some people are squabbling over copyrights while the whole planet is in peril. 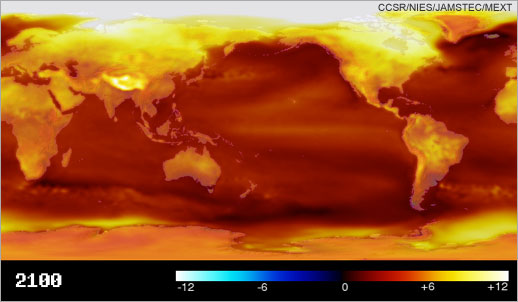 Our workshop participants came from solid backgrounds in broadcasting or independent film-making, and we are not naive activists asking hard-nosed broadcasters to let go of their precious rights which generates vital income. But we would have expected them to allow films such as Climate in Crisis to circulate a bit more freely in everybody’s interest.

This reminded me of correspondence I had last year with the Canadian producers of another outstanding climate film titled The Great Warming. The initial discussions with its director were promising, but when the distribution people started talking about ‘revenue optimising’, our negotiations stalled.

It also reminded me of similar experiences of other environment and natural history film makers, such as South Africa’s Neil Curry. He had a long struggle with the BBC to clear the non-broadcast use rights of his own film that he wanted to take back to the locations in Botswana where it was filmed.

Many broadcast and production companies in the west don’t realise that TV broadcasters in developing Asia operate on a very different basis. Talking about broadcast ‘pre-sales’ or ‘commissions’ loses meaning when many stations are operating on tiny budgets — or in some cases, no budgets — for factual content. Many are struggling to survive in tough, emerging economies.

Is this our future?

TVE Asia Pacific operates a regional film distribution service that brings environment and development films within reach of such broadcasters. We operate without getting mired in license fees or royalties.

Our 2-day workshop called for climate change to be recognised as a ‘copyright free zone’. This would enable audio-visual media content on the subject to move freely across borders and to be used widely for broadcast and narrowcast purposes.

Here’s the full reference from our statement of concern:

“Prevailing copyright regimes prevent the sharing and wider use of outstanding TV programmes and video films on climate and development issues. We are deeply concerned that even content developed partly or wholly with public funding (government grants, donor funds or lottery funds) remain unfairly locked into excessive copyright restrictions. Sometimes film-makers and producers themselves are willing but unable to allow their creations to be used for non-commercial purposes by educational, civil society and advocacy groups. We appreciate the media industry’s legitimate needs for intellectual property management and returns on investment. At the same time, the climate crisis challenges us to adopt extraordinary measures, one of which can and should be recognising climate change as a ‘copyright free zone’. Such agreement would encourage media organisations and independent producers to share content across borders, and with entities outside the media industry engaged in climate education, advocacy and activism.”

Here’s the simple question I raised during the workshop, which is worth being posed to all those who hesitate to even discuss this issue:

Can anyone manage their intellectual property rights on a dead planet?