Long before Malala, there was Meena… 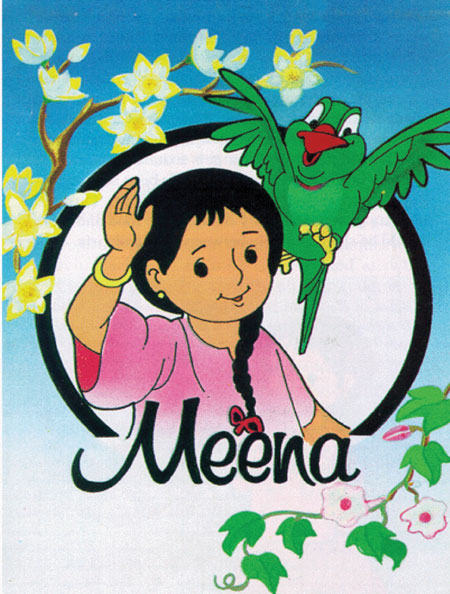 Long before Malala, there was another spirited young girl named Meena.

Like Malala Yousafzai does today, Meena too spoke out for and on behalf of girls — their right to education, good health, nutrition and, most important, to be treated the same way as boys.

Malala and Meena could well have been sisters in arms — except that the latter isn’t quite real. She is a cartoon character imagined and developed by some of South Asia’s most talented animators and development communicators two decades ago.

UNICEF developed the Meena Communication Initiative (MCI) as a mass communication project aimed at changing perceptions and behaviour that hamper the survival, protection and development of girls in South Asia.

“Meena is a cartoon character from South Asia. She is a spirited, nine-year-old girl who braves the world – whether in her efforts to go to school or in fighting the stigma surrounding HIV/AIDS in her village.”

UNICEF launched Meena in September 1998 after eight years of extensive research in the region since the initial conceptualization. The name Meena was carefully chosen as it was found to span the different cultures in the region: people in Bangladesh, Bhutan, India, Maldives, Nepal,  Pakistan and Sri Lanka could relate to the name.

There was no fundamentalist group threatening Meena’s village. Instead, it was grappling with poverty, ignorance and orthodoxy.

The Meena stories are entertaining and fun, but also reflect the realities of girls’ lives in South Asia. Through story-telling, important social messages are conveyed, such as the value of educating girls, freedom from exploitation and abuse, need for hygiene and proper sanitation, and the right of girls to a proper childhood not marred by under-age marriages.

In total, 13 Meena episodes were produced through a collaboration that involved Ram Mohan Studios of Mumbai and Hanna-Barbera affiliate Fil Cartoons of Manila.

Meena: Too Young to Marry

Meena is widely recognised and appreciated in most South Asian countries, and is a successful advocacy and teaching tool for girls’ and children’s rights. The Meena figure has achieved remarkable popularity as she tackles the key issues affecting children, and the threats to the rights of millions of girls in South Asia.