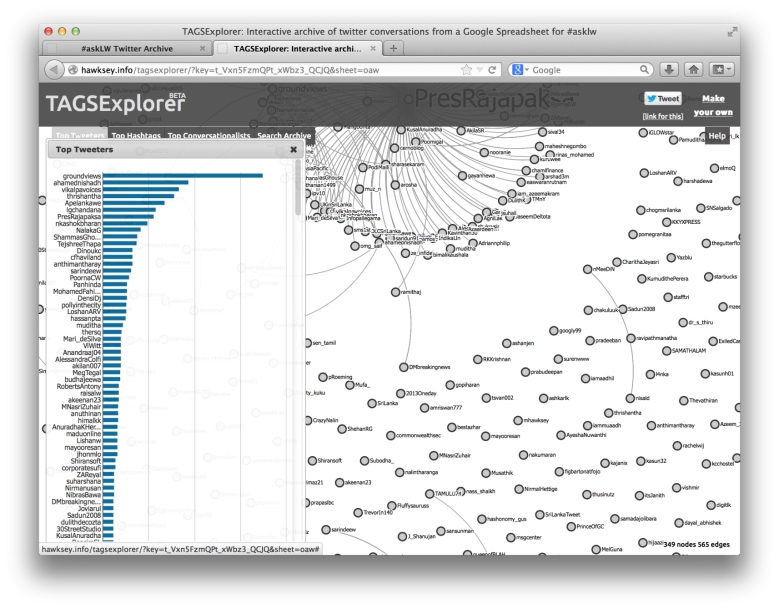 Along with dozens of tweeps, I took part in an interesting Twitter Q&A session with Lalith Weeratunga, Secretary to the President of Sri Lanka, which unfolded from 14:30 to 16:00 Sri Lanka Time on 19 June 2013.

Our questions were posed using the hashtag #AskLW: they are all displayed on Twitter at https://twitter.com/search/realtime?q=%23askLW While most were in English, some came in the local languages of Sinhala and Tamil too.

Groundviews.org, the citizen journalism website, has archived online 2,680+ tweets related to this exchange. Of these, some 1,140 are original tweets (posted since 14 June 2013, when #askLW was first announced) while others are retweets.

Twitter user @gopiharan created a bundle of tweets Lalith Weeratunga answered in the one and a half hours of the Q&A session.

As Groundviews.org noted, “There was no historical precedent for this kind of engagement over social media, especially for someone so high up in Government and in daily contact with the (Lankan) President.”

Commenting on the timing of this exchange, Groundviews editor Sanjana added: “Ironically, the announcement of the Twitter Q&A with Weeratunga came on the same day Gotabaya Rajapaksa, the President’s brother, in a spark of unrivalled genius, called social media no less than a national security threat in post-war Sri Lanka.”

Sanjana has done a quick and very good analysis of what was asked, which selected few among many were actually answered, and which topics gained traction among those participating – especially during the period the event was live.

Even more interesting is how contentious and controversial topics were completely ignored. To be sure, Weeratunga isn’t the first public official to do so, and some might even argue that he had the right to choose his questions. (That won’t have been so easy in a physical press conference.)

All the same, it is highly revealing that the top public servant in Sri Lanka chose not to respond to questions on Islamphobia, Buddhist extremism, hate speech, militarisation, human rights and other topics of great public interest in today’s Sri Lanka.

It’s remarkable that such questions were posed, in a public platform, which is more than what the mainstream media (MSM) of Sri Lanka regularly ask at official press conferences given by senior government officials. From all accounts, the monthly breakfast meetings that the President has with newspaper editors is also a lame affair where no critical questions are raised.

Yes, MSM and citizen journalists are not directly comparable. In the prevailing intolerant environment, it is telling that many social media users took cover under pseudonyms to pose questions to the top civil servant of Lanka (while the rest of us asked under our own names). There was even speculation among some tweeps about what might happen to those who ask pesky questions…

In this post, I want to collate and briefly annotate my own questions to Weeratunga – all of which he chose not to answer. I’m not surprised and certainly not sulky: these were admittedly not as easy as some others.

I posed a few questions in advance, and then some more during the live event. They were in one way or another related to the multiple positions that Weeratunga holds in the Lankan government.

Among other things, he is Chairman of the Telecommunication Regulatory Commission of Sri Lanka is also the current Chair of the Information and Communication Technology (ICT) Committee of UNESCAP – the UN Economic and Social Commission for Asia and the Pacific.

One question stemmed from Weeratunga’s meaningful speech at the fifth National Conference on the Role of ICT in Reconciliation held at the Lakshman Kadirgamar Institute for International Relations and Strategic Studies (LKIIRSS) in Colombo in Nov 2012.

#AskLW: I read your speech on ICTs at LKIIRSS last Oct. How can #lka govt that doesn't tolerate any dissent really promote #reconciliation?

I also asked a question on the ICT Agency of Sri Lanka, which has outlived its original lifespan and whose efficacy is in question.

#AskLW #lka ICT Agency came with built-in 'sunset' clause. Why hasn't that happened? Will the sun ever set on this limited period agency?

Not answered. See also my 2006 critique, ICT: Hypes and realities

Commenting on the very different – sometimes contradictory – messages given out by senior elected and other public officials of the Lankan government on matters of domestic and global interest, I asked:

Not answered. But then, I didn’t expect one! To his credit, Weeratunga has been the mild, amiable and intelligent face of the government…

Picking up my lasting interesting seeing a secular state in Sri Lanka, I posed this question:

When the live exchange started, and some tweets were asking him on all sorts of specific interventions, I tweeted this reminder to fellow tweeps:

Not quite heeded – but I didn’t expect it either.

Weeratunga, who does not yet have his own Twitter account, gave his selected answers using the President’s official account, @PresRajapaksa. This was noted by others, and I replied to one:

Many tweeps asked him to comment on the Defence Secretary’s recent remark on social media. Having noted, only minutes earlier, that “Social Media is a powerful tool”, Weeratunga added later: “Sec/Defence has a point; since it has been used for destructive purposes elsewhere, he has said so.”

Some tweeps reacted to this observation among ourselves. My contribution:

Knowing well Lankans don’t like to be compared to Indians, who nevertheless hold many lessons for us in managing diversity and in balancing modernity with tradition, I asked:

Not answered — but elicited some supportive replies from other tweeps.

As Weeratunga and team was slow in responding to the torrent of tweets coming in, I remarked:

As I noticed how easy questions were being answered while a whole lot of hard ones were not, I decided to press on with what seemed like a lost cause:

#AskLW Getting up close & personal, have you ever come close 2 quitting as #lka top civil servant? Does anything keep you awake at night?

Not answered. (Well, after all, this wasn’t Hard Talk!).

Prompted by @Groundviews, there was a brief exchange on Sri Lanka’s fully state owned budget airline Mihin, which has been losing billions of public funds from Day One. I reacted:

I’ve described myself as a hybrid journalist with ‘one foot in each grave’ — straddling the worlds of mainstream media and citizen journalism. In years of mainstream journalism — practised in Sri Lanka and across Asia — I have sharpened the art of asking pointed questions. I often ask more questions than I find answers for. So this is part of that process.

But I’m very glad all our questions are archived online — which is highly significant as part of the public record of our times. When Weeratunga next speaks about ICTs nationally or internationally, this digital record will be part of his legacy.

For now, many thanks to Weeratunga and @PresRajapaksa new media team for having organised this event. It’s a good start, and hopefully they will repeat this from time to time with improved capability at their end to cope with the info flood…

My last tweet in this exchange was a salute to the original cyber politician of Sri Lanka:

#AskLW scored around 3.5 on Moragoda Scale of #lka Cyber Engagement where @milindamoragoda set benchmark of 1 & high end is 10. Do u Agree?