I just killed a few dozen ‘girls’ before breakfast. It wasn’t always easy or pleasant, and after a while there was blood all over the place. But I feel good about getting them – and I saved an innocent baby in the process, and even helped a researcher doing good work!

The ‘girls’ are malaria carrying mosquitoes, and I was playing a new Facebook game called Mosquito SPLAT that was released this week to mark World Malaria Day 2009.

Now online: a game we have played over millennia against 'em blood suckers...

The aim of the game is to use the fly squatter to SPLAT mosquitoes before the baby gets malaria. For each mosquito you SPLAT, you score 10 points. For every 100 points scored, advertisers will make a donation to support malaria research projects at the National Institute for Medical Research in Tanzania. We also score 10 points for everyone we invite to play the game – plus there’s a link taking us to an online donation page in case we want to support the research directly.

“It’s quick, easy and fun, and a great way to do your part for one of the most serious global health problems in the developing world,” say the game’s promoters.

Indeed. Nearly 500 million cases of malaria occur each year, resulting in over one to three million deaths (figures online vary enormously on this). Malaria is particularly devastating in Africa where it is a leading killer of children. Every 30 seconds a child in Africa dies from malaria.

The fact is, malaria deaths are entirely preventable with modest investment and spread of knowledge that mosquitoes spread malaria (not everyone knows this, and as I wrote in another blog post, that’s a challenge that educators and broadcasters are now working on). 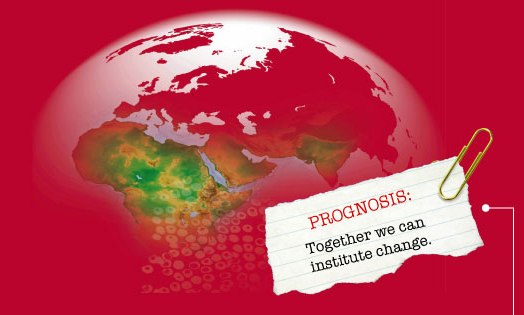 But more needs to be done to engage the Digital Natives in this global public health challenge. It’s not just the exposed people in malaria-prevalent parts of Africa, Asia and Latin America who are at risk. As development economist Jeffrey Sachs has been reminding us eloquently, malaria reduces productivity, increases poverty, weakens people’s bodies and makes them vulnerable to other diseases. In a globalised world, such massive suffering in some parts of the world would quickly manifest in different ways all over the planet.

Mosquito SPLAT is a partnership between the McLaughlin-Rotman Center for Global Health at the University Health Network and the University of Toronto and the UN Foundation’s Nothing But Nets campaign. The Mosquito SPLAT game is part of Malaria Engage, an initiative to enlist people directly in the anti-malaria battle by supporting malaria research projects in the developing world.

Little biology lesson: Usually, people get malaria by being bitten by an infective female Anopheles mosquito. Only Anopheles mosquitoes can transmit malaria, and they must have been infected through a previous blood meal taken on an infected person. When a mosquito bites an infected person, a small amount of blood is taken, which contains microscopic malaria parasites. About one week later, when the mosquito takes its next blood meal, these parasites mix with the mosquito’s saliva and are injected into the person being bitten.