In this week’s Ravaya coumn (in Sinhala), I look at the hype and reality of UFOs. 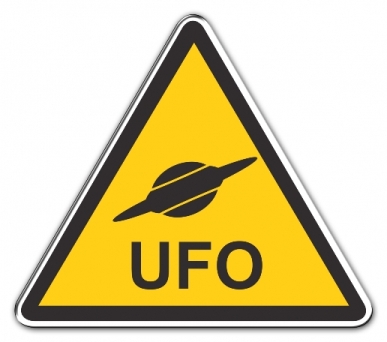 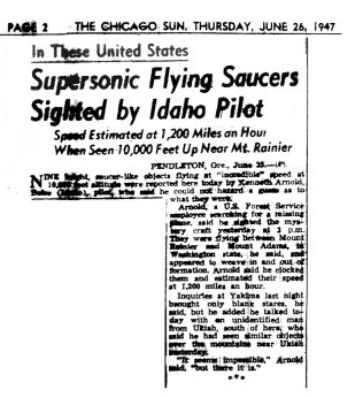 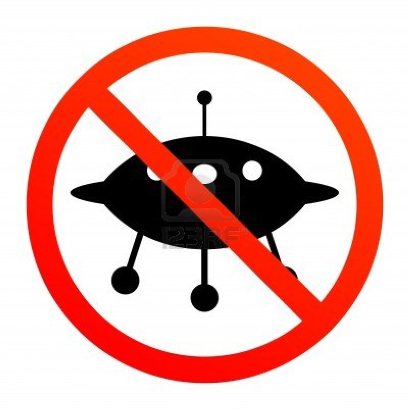 The first ever book on astronomy I owned as a kid, a pocket guide to the night sky, was written by an Englishman named Patrick Moore.

Armed with the tattered book, I joined night sky observation sessions of the Young Astronomers’ Association, formed in the mid 1980s.

Hormones-on-legs that we all were at the time, we were interested in ‘heavenly bodies’ at both ends of the telescope. But we couldn’t have had a better guide to the celestial wonders than the erudite yet eminently accessible Patrick Moore.

Indeed, Sir Patrick Moore, who died on December 9 aged 89, was the world’s best known public astronomer for nearly half a century.

Although he wrote over 70 books on astronomy and space, it was his television work that made him such a household name. He hosted a monthly TV show, called The Sky at Night, demystifying the night sky and space travel for ordinary people.

The show started on BBC Television in April 1957 – six months before the Space Age dawned. For 55 years, the low-budget show has chronicled highs and lows of the entire the Space Age and brought the wonders of the night sky into the living rooms of millions.

Sir Patrick presented it for 55 and six months, doing a total of 720 episodes. He missed it just once, in July 2004, when he was hospitalized for a few days with food poisoning.

The show has earned a place in the Guinness Book of World Records as the longest-running programme with the same presenter in TV history. It’s unlikely to be broken.

He was essentially an amateur astronomer, albeit a serious and passionate one. He did some original mapping of the Moon’s surface in his younger days (used later by the both American and Russian space programmes), and headed a planetarium in Northern Ireland for a while in the 1960s, but he was largely self taught in the subject, and did mostly optical observations with his own telescopes.

Sir Patrick’s practical knowledge of astronomical observations and his brand of humour – together with his lovable eccentricity — made the TV show interesting to people from all walks of life while also those engaging seriously pursuing amateur astronomy.

But Sir Patrick insisted that it was the subject, not his style. When the show reached 50 years and over 650 episodes in early 2007, Sir Patrick explained its enduring appeal: “Astronomy’s a fascinating subject. You look up… you can’t help getting interested and it’s there. We’ve tried to bring it to the people…it’s not me, it’s the appeal of the subject.”

Sir Patrick was centrally involved in the BBC’s coverage of the Moon Landings in the late 1960s and early 1970s. He is remembered as an excellent interviewer who brought out the best in his guests. It was mind-stimulating TV that was entertaining but not dumbed down.

One repeat guest was his long-standing friend Sir Arthur C Clarke, whom he first met through the British Interplanetary Society in the 1940s. They were both ‘space cadets’ when few people took space travel seriously.

In a tribute to the world’s most enduring astronomy show, Sir Arthur said in 2007: “Sky at Night has not been just a gee-whiz show of rockets, satellites and other expensive toys deployed by rich nations trying to outsmart each other. At its most basic, it’s a show about exploring that great laboratory within easy access to anyone, anywhere on the planet: the night sky.”

He added: “By the time the Space Age dawned, Patrick was well on his way to becoming the best known public astronomer in the world. The Sky at Night only consolidated a reputation that was well earned through endless nights of star-gazing, and many hours of relentlessly typing an astonishing volume of books, papers and popular science articles.”

In the 50th anniversary programme, broadcast in April 2007, Sir Patrick travelled back in time to see their first recording. He talked to his earlier self about astronomy back in 1957, and discussed how things have changed in half a century.

He then time travelled to 2057 where the ‘virtual’ Patrick, saved in the BBC computer, is celebrating 100 years of making The Sky at Night and talked to Dr Brian May about the discovery of life on Mars.

That same month, the International Astronomical Union (IAU) — the professional body that has sole authority to name celestial bodies –designated an asteroid as “57424 Caelumnoctu” in honour of the show. The number refers to the first broadcast date, and the name is Latin for “The Sky at Night”.

Earlier, the IAU had named asteroid No 2602 as “Moore” in his honour.

In 2001, the year he was knighted by the Queen for “services to the popularisation of science and to broadcasting”, he became the only amateur astronomer ever to be inducted as an honorary Fellow of the Royal Society. He also received a BAFTA Award (the British Oscar) for his broadcasting accomplishments.

Many of the world’s leading professional astronomers have acknowledged being inspired by Patrick Moore’s books and TV shows.

That includes the UK’s Astronomer Royal, Sir Martin Rees, FRS, who said in 2005: “I’m one of multitudes who owe their enthusiasm for astronomy to Patrick Moore. As a schoolboy I viewed, on the flickering screen of our family’s newly acquired black and white TV, his commentaries on the first Sputnik. I was transfixed…”

Sir Patrick’s influence extended well beyond the western world. Tributes have come in from everywhere.

Dr Nalin Samarasinha, Senior Scientist at the Planetary Science Institute in Tucson, Arizona, USA – and one of the very few Lankans to have an asteroid named after himself — said: “Certainly, I read some of his early books in the mid 1970s when I was an A/L student at Nalanda College, Colombo. They could be classified as an inspiration as well as a source of knowledge. This was in the era when there was no Internet and one needed to read books to learn about the field!”

Thilina Heenatigala, Project Coordinator of Astronomers Without Borders (AWB) that popularises astronomy, said: “He was a true ambassador of astronomy, bringing the Universe to the public. His work inspired me both as a kid and as an adult.”

Sir Patrick used his show also to counter pseudoscience beliefs such as the popular association of unidentified flying objects (UFOs) with alien beings. He sometimes investigated what he called ‘Flying Saucerers’ – people who were genuinely confused by natural or man-made objects in the sky that were unfamiliar and, therefore, presumed mysterious.

He showed how UFOs had nothing to do with alien creatures. Yet he believed in the prospects of life elsewhere in the universe.

He was once asked what he might say if a real Flying Saucer landed on his front lawn, and a little green man emerged. His reply: “I know exactly what I would say: ‘Good afternoon. Tea or coffee? Then do please come with me to the nearest television studio…’”.

He noted in his 2003 autobiography: “There is nothing I would like better than to interview a Martian, a Venusian or even a Saturnian, but somehow I don’t think that it is likely to happen.”

If that particular wish didn’t come to pass, Sir Patrick couldn’t complain. On and off the screen, he met an extraordinary array of famous Earthlings. Among them were Orville Wright, the very first man to fly a heavier-than-air machine, Albert Einstein (whose violin playing he accompanied on the piano), and Yuri Gagarin and Valentina Tereshkova, respectively the first man and women to travel to space.

Once, when Tereshkova was visiting London, Sir Patrick chaired a major meeting in the Festival Hall. A tough journalist asked her: “What qualities would you look for in a man going to the Moon?” The cosmonaut, who spoke good English, answered with a charming smile: “Do you mean if I was going too?”

As an active astronomer, TV host and public speaker, Sir Patrick travelled the world for over half a century, visiting all seven continents including Antarctica. He was especially fond of chasing total eclipses of the sun, one of the most spectacular events in Nature.

When not star gazing, he pursued many other interests. He freely admitted to being unathletic and uncoordinated, but was an avid cricketer, turning up for his home town Selsey’s Cricket Club well into his seventies.

Once, when asked on TV about his definition of Hell, he replied: “Bowling to a left-hander, on a dead wicket, with a Pakistani umpire.”

He also played the piano and xylophone until arthritis ruled it out. He never married because his fiancée was killed by a bomb during World War II, and lived in a rural house with his pet cats. He was fond of making home-made wine, for which he said “you can use almost anything, within reason” as raw material. Rose petal was his favourite.

Thank you, Sir Patrick, for being our genial guide to the night sky and space travel for over half a century. 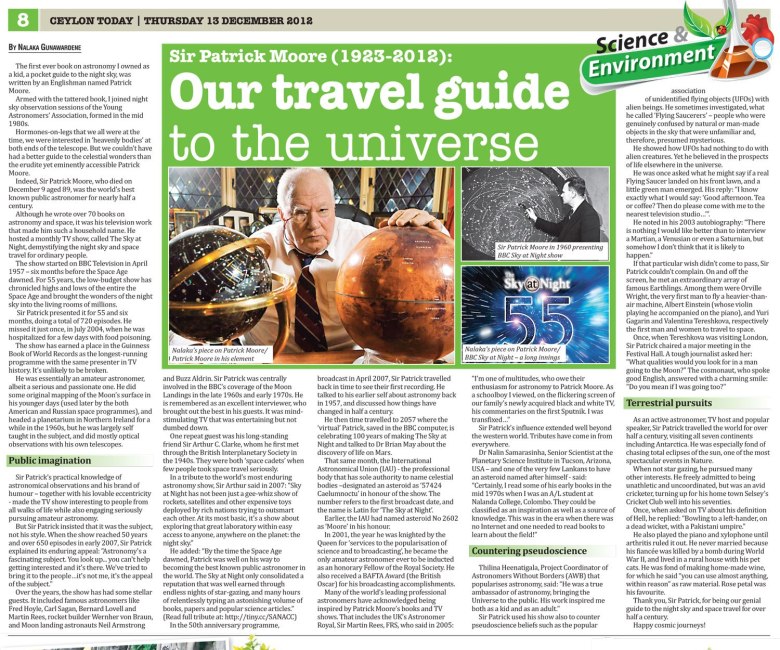