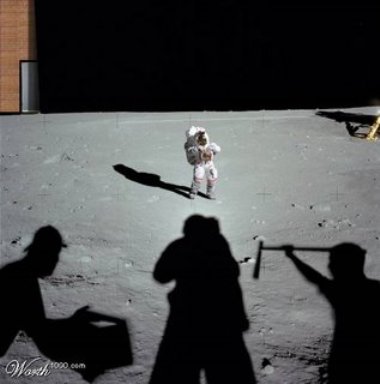 Is this how it really happened? Just kidding!

When NASA announced last week that they were working with a leading digital imaging company in Hollywood to remaster the original Apollo 11 Moon walk video footage, I told myself: that’s one more cannon to the conspiracy theorists!

Everyone would welcome a quality improvement in those murky, grainy moving images capturing humanity’s grand achievement. But the choice of Lowry Corporation, best known for restoring old Hollywood films, could fuel the fire of conspiracy theorists who argue that the entire Moon landing was faked by NASA with the connivance and participation of Hollywood. They believe that the entire Apollo programme – that landed people on the moon six times between 1969 and 1972 – was staged on a movie set or secret military base.

This link didn’t bother Richard Nafzger, the NASA engineer who oversaw television processing at the ground-tracking sites during the Apollo 11 mission, and now involved in their restoration. “This company is restoring historic video. It mattered not to me where the company was from,” Nafzger was quoted as saying.

Technically and officially, NASA is right. The US space agency has always dismissed the conspiracy theorists, and not spent much time discussing the outrageous idea. As it says on NASA website: “The Apollo Moon landings were among the most completely documented and observed events in history. Moon rocks have been examined by scientists from all over the world, not just the U.S. Video special effects were in their infancy in the late 60’s so that faking a landing on the Moon would probably have been more difficult than actually going there, and it seems highly unlikely that the hundreds or even thousands of people who would have had to be involved in such a conspiracy would have kept it a secret for so long.”

Independent scientists point out that it would be impossible for tens of thousands of NASA employees and Apollo contractors to keep such a whopping secret for almost four decades. Tell that to those who are deeply suspicious of anything to do with governments, who historically don’t have the best record for transparency and full disclosure!

So the conspiracy theory lingers. Like many other crazy ‘theories’, it has spread rapidly with the growth of the Internet. It’s really an old one: even at the time Apollo astronauts landed on the Moon, a few people refused to believe it as it apparently conflicted with their religious beliefs.

The Moon Hoax, as it’s popularly called, accuses NASA of manufacturing, destroying, or tampering with evidence — including photos, telemetry tapes, transmissions, and rock samples; and that the deception continues to this day. These theorists concede that the Apollo launches did take place. But instead of going to the Moon, which they say was technologically impossible at the time, the astronauts just orbited the Earth for a few days while NASA carefully fed the media with manufactured images. And then they returned to a heroes’ welcome!

Before we proceed, let’s agree that there is independent, verifiable and irrefutable evidence that the Moon landings did take place. Here are a few online sources for details:
Bad Astronomy website by Phil Plaits
Did We Really Land on the Moon? Suggestions for Science Teachers from Rational Inquiry
Wikipedia entry: collaborative discussion with multiple sources cited
Clavius.org website

My curiosity in conspiracy theories stems from my interest in popular culture. In this instance, I’m intrigued to note how moving images have fuelled the Moon Hoax theory in a number of ways. A cornerstone in the doubters’ argument is that NASA’s photos and videos from the moon contained ‘suspicious anomalies’ (all of which, by the way, have been satisfactorily explained by scientists.) 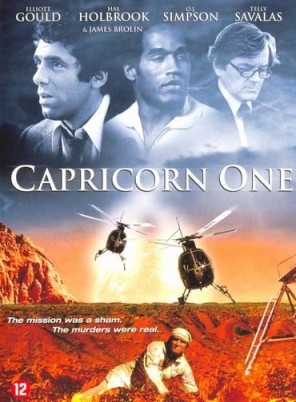 Superb entertainment, but it was just that...

Some believe that these theories inspired the 1978 movie Capricorn One, where NASA fakes a Mars landing on a military base on Earth, and then goes to desperate lengths to cover it up. It’s entirely possible that some people can’t discern fact from fiction. Or why allow facts to get in the way of a damn good story?

In 1980, the Flat Earth Society was one of the first to accuse NASA of faking the Moon landings, arguing that these events were actually staged in Hollywood studios and based on a script written by Arthur C. Clarke! Another group suggested that acclaimed film director Stanley Kubrick, who co-wrote with Clarke the classic movie 2001: A Space Odyssey, was strong-armed into shooting much of the Apollo footage.

Sir Arthur Clarke, with whom I worked for over 20 years, used to laugh these off. He’d enjoyed a ring side seat when he joined Walter Cronkite in covering Apollo 11 and later missions for CBS News.

At one point in the early 1990s, he wrote to the NASA Administrator, with his tongue firmly in his cheek, saying: “Dear Sir, On checking my records, I see that I have never received any payment for this work. Could you please look into this matter with some urgency? Otherwise, you will be hearing from my solicitors, Messrs Geldsnatch, Geldsnatch and Blubberclutch.”

Of course, he never received – nor expected – a reply. But when media reports about this appeared, some with no sense of humour considered it further ‘proof’ of a cover-up!

And here’s another connection: Peter Hyams, who directed Capricorn One, went on to direct the movie adaptation of Arthur C Clarke’s 2010: Odyssey Two, which was released in 1984.

More seriously, in later years Sir Arthur was concerned that at one point a few years ago, millions of Americans harboured doubts whether the Moon landings actually took place. That indicated a failure of the education system to produce people with critical thinking abilities, he said.

The conspiracies received a boost when, on 15 February 2001, the Fox News TV network aired
Conspiracy Theory: Did We Land on the Moon?. Hosted by X-Files actor Mitch Pileggi, this hour-long, sensational documentary peddled what it called eerie “inconsistencies” in NASA’s Apollo images and TV footage. Among them: no blast craters are visible under the landing modules; shadows intersect instead of running parallel, suggesting the presence of an unnatural light source; and a planted American flag appears to ripple in a breeze although there’s no wind on the moon.

It concluded that the whole Apollo Moon landings were faked in the Nevada desert because, cccording to the conspiracy theorists, NASA did not have the technical capability of going to the Moon, but pressure due to the Cold War with the Soviet Union forced them to fake it. Fox TV did preface the programme with a notice saying: “The following programme deals with a controversial subject. The theories expressed are not the only possible interpretation. Viewers are invited to make a judgement based on all available information.” But skeptics felt Fox didn’t do enough to provide a minimum level of balance in their discussion. 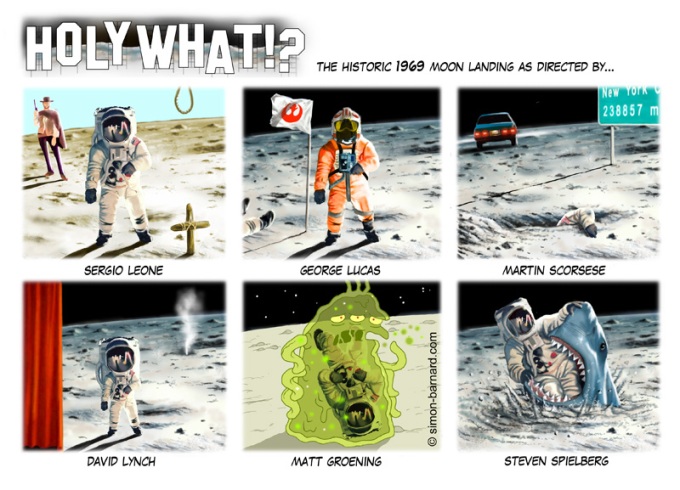 Warning: This is a funny cartoon and not meant to be taken seriously

The documentary’s ‘evidence’ has since been refuted point by point. NASA has also dismissed the documentary’s claims. It prompted Sir Arthur Clarke to protest to his long-time friend Rupert Murdoch, owner of the Fox TV network, for peddling unscientific nonsense.

Rather than being a ‘true believer’, Fox TV may have been trying to boost its audience ratings. But others in the moving images industry apparently take the matter very seriously. Among them is the film-maker Bart Sibrel. His aggressive interview tactics once provoked astronaut Buzz Aldrin (second man to walk on the Moon) to punch him in the face in a 2002 encounter.

“I don’t want to call attention to the individuals who are trying to promote and shuffle off this hoax on people,” Aldrin told CNN in a recent interview. “I feel sorry for the gullible people who’re going to go along with them. I guess it’s just natural human reaction to want to be a part of ‘knowing something that somebody doesn’t know.’ But it’s misguided. It’s just a shame.”

One of the strongest rebuttals of the Moon hoax on TV has come from the Mythbusters series of popular science programmes produced by Beyond Television Productions, originally for the Discovery Channel. The series features special effects experts Adam Savage and Jamie Hyneman, who use basic elements of the scientific method to test the validity of various rumors, myths, movie scenes, internet videos and news stories in popular culture.

In August 2008, they tackled a number of pervasive myths associated with the Moon landing, debunking them one by one. To film the episode, Adam, Jamie and the rest of the Mythbusters team visited the NASA Marshall Space Flight Center in Alabama. A team of Marshall scientists helped the Mythbusters with several of their tests. Here are two excerpts:

As the 40th anniversary of the first Moon landing passes, the scientific community and rationalists will have to make some hard choices. How much more time and energy must they expend countering such wildly fanciful theories and fantasies? In a world that still has a (dwindling?) number of people who believe in more ancient concepts like the Flat Earth theory, is it really surprising that the Space Age would inspire its own share of modern-day myths?

No matter what the scientists say and how overwhelming the evidence is, conspiracy theories will always believe what they want. Often their convictions border on a blind faith – and as Arthur C Clarke was fond of saying (in relation to religions), one definition of faith is ‘believing in what you know isn’t true!’.

In a pluralistic world, people choose what to believe in

Then there is simple demographics. The total world population in 1969 was 3.6 billion. Today, it has surpassed 6.7 billion. This means nearly half of the people alive today were not even born when Neil and Buzz stepped on to the Moon. At 43, even I have only a headline memory of Apollo 11, even if it’s a strong one.

NASA itself is well aware of this. “As the number of people who were not yet born at the time of the Apollo program increases, the number of questions [about the moon landings] also may increase,” NASA said in a statement on the eve of the anniversary. “Conspiracy theories are always difficult to refute because of the impossibility of proving a negative.”

Perhaps what the Moon Hoax debate really needs is what Sir Arthur Clarke once proposed as a response to the obsession with UFOs and alien abductions: a decade or so of benign neglect. Conspiracy theorists and myth-makers thrive on counter-arguments and debate. When they don’t get it for long enough, they’ll probably run out of steam.

Meanwhile, networks like Fox News should stick to making entertainment programming that is labeled as such. Who can find fault with creations like The Simpsons?