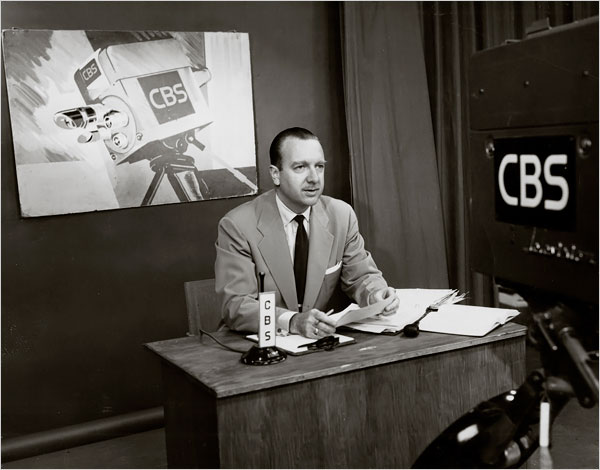 Walter Cronkite, the broadcast journalist and newscaster who redefined television news of his generation, has just signed off for the very last time. A leading light in the history of moving images is gone. What a light…and what a voice.

The New York Times reported the loss as its front page lead: “Walter Cronkite, who pioneered and then mastered the role of television news anchorman with such plain-spoken grace that he was called the most trusted man in America, died Friday at his home in New York. He was 92.”

Cronkite was best known as anchorman for the CBS Evening News for 19 years (1962–81). He was at the helm at a time when television became the dominant news medium of the United States. His influence spread well beyond one network, one medium and one generation. 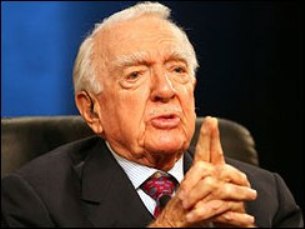 Danny Schechter, the News Dissector and head of MediaChannel.org, said in a tribute: “He figuratively held the hand of the American public during the civil rights movement, the space race, the Vietnam war, and the impeachment of Richard Nixon.”

His own former network, CBS, noted in a tribute: “Known for his steady and straightforward delivery, his trim moustache, and his iconic sign-off line – ‘That’s the way it is’ – Cronkite dominated the television news industry during one of the most volatile periods of American history. He broke the news of the Kennedy assassination, reported extensively on Vietnam and Civil Rights and Watergate, and seemed to be the very embodiment of TV journalism.”

The New York Times report added: “On the day President John F. Kennedy was assassinated, Mr. Cronkite briefly lost his composure in announcing that the president had been pronounced dead at Parkland Memorial Hospital in Dallas. Taking off his black-framed glasses and blinking back tears, he registered the emotions of millions.”

He is especially remembered for publicly opposing the Vietnam War. In 1968, he traveled to Vietnam, where he called the war a stalemate and advocated a negotiated peace. “If I’ve lost Cronkite, I’ve lost middle America,” President Lyndon B. Johnson said after seeing the broadcast, according to Bill Moyers, an aide to the president at the time.

In July 1969, Cronkite anchored the historic 32-hour CBS broadcast that covered the first Moon landing, which became the most widely watched live broadcast event worldwide up to that time. When Neil Armstrong stepped on the moon, Cronkite exclaimed, “Oh, boy!” — another rare show of emotion for the leading anchorman of his era who chose to keep his opinions separate from the news he covered and presented.

Cronkite missed the 40th anniversary of Apollo only by a few days. He will be sadly missed when astronauts and space buffs mark the event.

In this excerpt from for a 4-hour interview filmed for the Archive of American Television in 1998, Cronkite explains the origin of “That’s the way it is”– his signature sign-off:

New York Times has compiled some of his most memorable TV News moments.

The true professional he was, he never retired. Long after leaving CBS News, he remained fully active, engaged and supportive of good journalism in the United States and around the world. He lent his name to educational and charitable causes nurturing investigative journalism.

Danny Schechter writes in his blog: “In his later years, Walter Cronkite abandoned the pretense of only being above the fray and started speaking out as an internationalist for arms control and world federalism, and on many other global issues. He supported progressive causes but never too blatantly. He was very conscious of his image and reputation and identification with the media and power elite. He lived up the street from the United Nations and was often a speaker at UN events.”

Reproduced in full below is the endorsement Walter Cronkite gave our friends at MediaChannel.org, an online media activist group that keeps the spotlight on the media. In the dark during our own war, and in the days since the war ended, I have often found solace, inspiration and courage in his words.

Walter Cronkite On The Media­ And The MediaChannel.

Good evening, I’m Walter Cronkite. I really wanted to be with you in person tonight for Globalvision New Media’s launch of the new Internet site the Media Channel, but unfortunately I was called out of the country. Yet the issues that led to the creation of this unique global resource, and the crisis that’s facing all of us who work in and care about journalism and the media, are so profound that I simply felt compelled to tape this message so that you would know that I am with you in spirit at least.

As you know, I’ve been increasingly and publicly critical of the direction that journalism has taken of late, and of the impact on democratic discourse and principles. Like you, I’m deeply concerned about the merger mania that has swept our industry, diluting standards, dumbing down the news, and making the bottom line sometimes seem like the only line. It isn’t and it shouldn’t be.

We report, you decide...

At the same time, I’m impressed that so many other serious and concerned people around the world are also becoming interested in holding media companies accountable and upholding the highest standards of journalism.

The Media Channel will undoubtedly be worth watching and taking part in. I am intrigued by its potential, and its global reach. The idea that so many leading groups and individuals around the whole world have come together to share resources and information about a wide range of media concerns is very promising, and I urge you to make the Media Channel your media ‘bookmark’ and your portal to the Internet.

I’m particularly excited about one aspect of the Media’s Channel’s work: its encouragement to people inside the media to speak up ­to speak out about their own experiences. Corporate censorship is just as dangerous as government censorship, you know, and self-censorship can be the most insidious form of pulling punches. Pressures to go along, to get along, or to place the needs of advertisers or companies above the public’s need for reliable information distort a free press and threaten democracy itself.

I’m pleased that the Media Channel opens an immediately available resource for media whistle-blowers. Anonymity will be protected, of course­ if their stories check out, of course. And, of course, are backed up with the facts.

We have all been supportive for years of dissidents around the world who take great risks to stand up for what they believe in. But here at home, in our own industry, we need to make it possible for people to speak out when they feel they’ve been wronged, even if it means shaming newsrooms to do the right thing. Journalists shouldn’t have to check their consciences at the door when they go to work for a media company. It ought to be just the reverse.

As I’ve said on other occasions, the strength of the American system is possible and can be nurtured only if there is lively and provocative dissent. In a healthy environment dissent is encouraged and considered essential to feed a cross-fertilization of ideas and thwart the incestuous growth of stultifying uniformity.

We need to encourage and support those among us who face either overt or covert threats­ or even a more subtle absence of encouragement to search out the truth. We all know that economic pressures and insecurities within news organizations have reduced the scope and range of investigative reporting. Sometimes projects are spiked with just a simple phrase: “It’s not for us.”

We’re always ready to speak out when journalists are at risk. But today we must speak out because journalism itself is at risk. That’s why I’m speaking out and reaching out to you tonight, to tell you that I like the idea of the Media Channel and want to encourage your participation.

And that’s the way it is.