Iodised Salt: How to make the world smarter, faster? 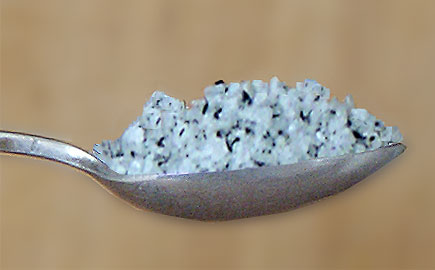 A miracle substance to get smarter?

One of the earliest video films I helped distribute at TVE Asia Pacific, soon after it was set up in 1996, was called Ending Hidden Hunger.

This 20 minute film, made in 1992 by Bedford Films of UK and narrated by Sir Peter Ustinov, described how the UN children’s agency UNICEF was working toward eliminating micronutrient deficiencies from iron, vitamin A and iodine in different parts of the developing world. Examples are taken from Africa and Asia to both illustrate the extent of the problem as well as steps being taken to reduce these deficiencies that cause mass-scale disability and death.

The main premise of the film was simple: those lacking micro-nutrients in their regular diet often don’t show immediate signs of starvation. This deprivation builds up over time and causes slow – sometimes irreparable – damage.

I was reminded of this film — and its still very relevant message — when reading an excellent essay by Nicholas Kristof in International Herald Tribune a few days ago. He is a columnist for the New York Times who travels the world reporting from the various frontlines of survival and struggle.

In Raising the World’s I.Q., dispatched from Rawalpindi, Pakistan, Kristof was talking about ‘a miracle substance that is cheap and actually makes people smarter’: iodised salt.

Here’s the context, as he put it:

“Almost one-third of the world’s people don’t get enough iodine from food and water. The result in extreme cases is large goiters that swell their necks, or other obvious impairments such as dwarfism or cretinism. But far more common is mental slowness.

“When a pregnant woman doesn’t have enough iodine in her body, her child may suffer irreversible brain damage and could have an I.Q. that is 10 to 15 points lower than it would otherwise be. An educated guess is that iodine deficiency results in a needless loss of more than 1 billion I.Q. points around the world.”

In nearly all countries, the best strategy to control iodine deficiency is iodisation of salt — one of the most cost-effective ways to contribute to economic and social development. Especially in these hard times, development professionals are looking for smart ways to get the biggest bang for their limited (and still shrinking) bucks. Investing in micronutrients – such as iodine – can provide some of the biggest bangs possible. 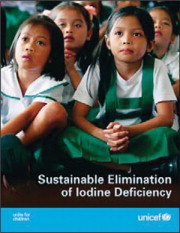 In June 2008, UNICEF published Sustainable elimination of iodine deficiency, a new report on progress since 1990 when the world’s governments set the target to eliminate iodine-deficiency disorders worldwide.

In October 2008, The Lancet, one of the world’s leading medical journals, published a report that noted: “Iodine deficiency is the most common cause of preventable mental impairment worldwide.”

The medical, public health and development communities have known and talked about iodine and other micronutrients for over 30 years. Significant progress has been made – for example, UNICEF says by 2006, more than 120 countries were implementing salt iodisation programmes, and 34 countries had managed to get rid of iodine deficiency among their people through this smart strategy.

But there still are major gaps — which continue to cause preventable damage to tens of millions of people including children.

Nicholas Kristof navigates through the heavy, jargon-ridden developmentspeak and churns out an eminently readable, accessible piece. It’s written in first person narrative from a part of the world where illiteracy, superstition – and their erstwhile companion, religious fanaticism – are trying to prevent people at risk from using iodised salt. This is science writing at its finest: anecdotal, personalised and purposeful.

And he’s absolutely right when he says iodised salt lacks glamour, doesn’t have too many stars or starlets singing its praise and (almost) no one writing about it despite its potential to improve lives for so many people.

I should know: one of the earliest topics I tackled as a young science reporter – getting started in the late 1980s – was salt iodisation. I struggled to put together a readable, engaging piece — which I then had to push through jaded editors who wondered what all this fuss was about.

I have only one (minor) bone to pick with Kristof. He pokes fun at Canada for hosting and supporting the Micronutrient Initiative, “an independent, not-for-profit organization committed to promoting simple cost-effective solutions for hidden hunger and developing innovative new solutions where needed.”

He calls Canada “earnest and dull, just like micronutrients themselves”. It’s a personal view – perhaps expressed with his tongue firmly in his cheek. Having travelled a fair amount in North America, and having good friends in both countries, I think that the nation north of the US-Canada border is a tad more civilised, certainly more caring and better engaged with the rest of the world.

But then, that too is a personal view. I’m darn lucky that I get enough iodine in my diet so that I can think for myself, keep asking lots of annoying questions…and occasionally even get some answers right.

Salt iodisation is not universally hailed. Read an alternative point of view that appeared in India’s Frontline magazine in 2006: Imposing iodine