Can Right to Information (RTI) Transform Lankan Society? Yes, but we have much to do…

Sri Lanka’s new Right to Information (RTI) law became operational on 3 February 2017. Marking the culmination of an advocacy effort sustained by social activists and journalists for over 20 years, the new law enables citizens to ask for, and be assured of information held in all government entities (as well as some private and non-profit entities).

The law being new, there still are apprehensions, misconceptions as well as skepticism on whether such transparency could work in a semi-feudal society like Sri Lanka’s.

On 15 February 2017, I served as main speaker at a public forum in Colombo on Sri Lanka’s newly operational RTI law and its wider socio-cultural and political implications. The event, organized by the National Media Forum (NMF), was attended by a large number of journalists, social activists, lawyers, government officials and other citizens.

In my presentation, I said the right to ask questions from rulers is very new, and there is no historical precedent for it in Sri Lanka. Subjects had no rights whatsoever and could not ask any questions from the absolute monarchs of Lanka who ruled the island for 20 centuries. The Portuguese, Dutch and British did not grant that right in their colony of Ceylon, and neither did any of our own governments elected since independence in 1948.

Citizens are typically intimidated by politicians and officials, and unless we overcome this wide-spread subservience, we cannot derive benefits from RTI, I argued. The new law gives an unprecedented right to all 21 million Lankans – of all walks of life and of all ages – but to exercise it well we need a political vision, tenacity and imagination.

Nurturing these qualities is the big challenge on the DEMAND side of RTI in Sri Lanka, now that the government has done an appreciable amount of work on the SUPPLY side – by keeping its 2015 election pledge and giving us both the fundamental right to information (through the 19th Amendment to the Constitution) and the law that operationalises it (Right to Information Act No 12 of 2016).

I quoted Dr Rajesh Tandon, founder and head of the Society for Participatory Research in Asia (PRIA), a voluntary organisation providing support to grassroots initiatives in India on the Indian experience of RTI. Since the RTI law was introduced in 2005, India has seen a marked improvement in governance, dissemination of information and involvement of civil society in the governance process, he says.

At the same time, he points out that some challenges remain at the implementation level. Certain states in India have been more active in creating a culture of information sharing and open government. As Indians found out, it isn’t easy to shake off centuries of misplaced state secrecy and mistrust in the public. “Old rules and procedures continue to co-exist as new laws and methods are invented. Official Secrecy Act and Right to Information Act co-exist, just as written precedent and e-governance co-exist.” (Watch my full interview with Rajesh Tandon here: https://vimeo.com/118544161). 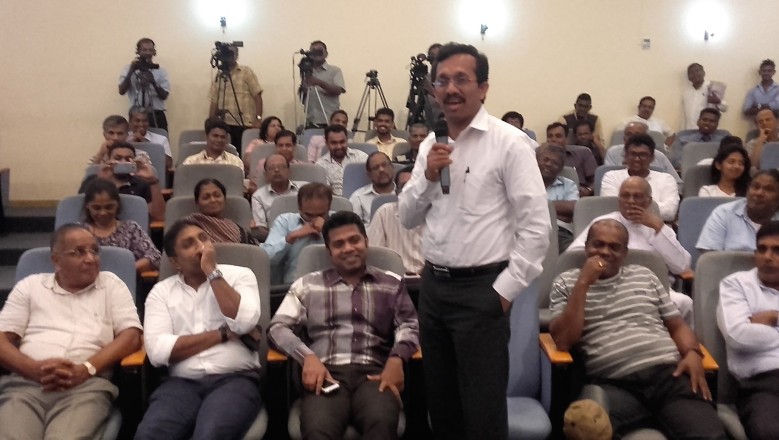 I also summarized India’s RTI lessons shared with me recently by Shekhar Singh, Founder of India’s National Campaign for People’s Right to Information (NCPRI) and a former member of the State Council for RTI, New Delhi. Chief among them:

Here is one news report on the event, by Lanka News Web (in Sinhala)

Here is the video of my full speech (in Sinhala):