Laugh, and the world laughs with you; Weep, and you weep alone…

I cry, therefore I am

“If you have tears, prepare to shed them now,” urged Mark Antony to fellow Romans after Julius Caesar died.

But what if you simply don’t have any tears to shed? That’s what my eye doctor recently cautioned me, after a routine examination. The natural tearing in my eye, necessary for keeping it moist and clean, wasn’t quite working. There is nothing to worry, he hastened to add, for it sometimes happens as our bodies slowly age. He asked me to use eye drops twice a day for a while.

This set me thinking about the value and power of tears. Although most land mammals have a lacrimation system to keep their eyes moist, humans are the only mammal generally accepted to cry emotional tears.

In my circles, I’m known to be an emotional guy. I have never believed in that macho myth of men not crying. I shed tears of joy and tears of sorrow, sometimes in public. I cry when people I know, admire or love leave this world, sometimes at the most unexpected moments. Powerful movie moments of triumph or despair often move me to tears, as do simple joys of life — such as seeing my kid perform well on stage in a school concert.

Despite what my doctor says, I’ve been shedding plenty of tears this year.

I openly wept when journalist colleague Lasantha Wickrematunge was gunned down in broad daylight on a cruel January day. He was Sri Lanka’s real leader of the opposition.

My eyes were completely misty when the news of the original TV news anchorman and broadcast giant Walter Cronkite passed away on 18 July 2009 after an illustrious career spanning decades. 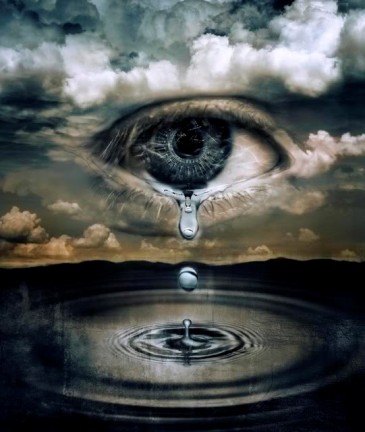 Have tears, will shed...

Two weeks later, I joined millions of Filipinos in mourning the passage of Cory Aquino, the courageous woman who led the world’s first People Power revolution, toppling one of the worst tyrants of the 20th century.

In contrast, Michael Jackson’s death on 25 June didn’t immediately move me to tears, even though I quickly wrote a tribute. But the live broadcast of his star-studded funeral service on 6 July did. I watched it in the solitude of a hotel room in Amsterdam on a warm summer evening, and cried — as much for the tragic end of the man as what he stood for. Those tears inspired the op ed essay on the two Moonwalks.

I can add more to this list if I think long enough. The point is: my eye specialist’s clinical examination didn’t capture these highlights (lowlights?). There’s a part of our emotional lives that our doctors may never fathom. We ourselves are often barely aware of it.

A recent article in Reader’s Digest (March 2009 issue), titled Big Boys Don’t Cry — and Other Myths About Men and Their Emotions, said new research reveals that a man’s emotional life is as complex and rich as a woman’s, but often remains a mystery to him as well as to any woman who loves him. You can say that again!

Conventional wisdom doesn’t encourage or celebrate grown men crying. One of my favourite poems is ‘Solitude’ by Ella Wheeler Wilcox, which opens with these memorable lines:

“Laugh, and the world laughs with you;
Weep, and you weep alone;
For the sad old earth must borrow its mirth,
But has trouble enough of its own.
Sing, and the hills will answer;
Sigh, it is lost on the air;
The echoes bound to a joyful sound,
But shrink from voicing care.”

My close friends think I’m melancholic by nature, and long ago I came to terms with who and what I am. I don’t spend my days lamenting or weeping, for sure, but I also don’t hesitate to cry when the emotion warrants it.

If that means I weep alone, so be it.