This is one of history’s most famous photographs – and also one that is frequently misidentified. The man behind the space mask is a pioneer Moon walker – but it’s not Neil Armstrong. It’s the Buzz Aldrin, the second Man on the Moon.

According to space historians, all the famous photos from the first Moon landing are actually of Aldrin, with Armstrong reflected in the visor. This is an occupational hazard for those who take photos! 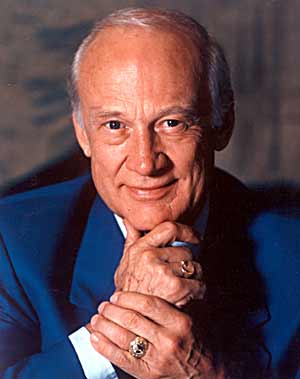 Buzz, who celebrated his 80th birthday on January 20, remains active and publicly engaged as he has been for most of the past 40 years since the first Moon landing in July 1969.

I’m following Buzz on his Twitter feed, from which I find that he’s just back from a trip to Antarctica with a National Geographic cruise, was at the premiere for the movie Avatar in mid December, and is now busy promoting his latest autobiography, Magnificent Desolation.

On his 80th birthday, Buzz asked fans to donate US$8 ot 80 to the Clinton-Bush Haiti Fund. And he will soon launch my iPhone App, Buzz Aldrin Portal to Science and Space Exploration.

This contrasts with Neil Armstrong, who is notoriously shy. He rarely speaks in public, turns down all media interviews and has also refused autograph requests since 1994.

Trained as an engineer, the two-time space traveller Buzz has been keeping up with new media pretty well. He has his own website, and launched his own YouTube channel only a month ago, where we can see his latest broadcast and film appearances. Through these and other means, he continues to promote causes like space exploration, science education and nurturing imagination.

To mark his 80th birthday, we present some of the many Buzz Aldrin videos available online.

First, here’s the moment when Buzz Aldrin set foot on the Moon, in a partial restoration by NASA Video

Here’s the DVD Promo Overview of the latest Buzz video:

On the 40th anniversary of the Apollo 11 crew landing on the moon, former astronaut Buzz Aldrin shares his experience and predicts where man will go in the future. (Assciated Press video, 20 July 2009)

Buzz has long years of close association with popular culture. For example, the popular space ranger character Buzz Lightyear, in Pixar’s Toy Story movie series, is named after him. Apparently the film’s makers felt that he has “the coolest name of any astronaut.”

Finally, for comic relief, here’s the 2003 interview Buzz did with Ali G (Sacha Baron Cohen) in the British comedy series Ali G in da USA, during which Ali G referred to him as Buzz Lightyear:

P.S.: If you prefer a more detached look at the man and his career:
The Guardian, July 2009: The Man who fell to Earth