Tareque Masud in Cannes in 2002. Photo by Olivier Laban-Mattei/AFP

South Asia’s notorious killing fields, a.k.a. roads, have robbed us of another highly talented and committed professional. Bangladesh film maker Tareque Masud died on the spot when his microbus collided head-on with a passenger bus in in Ghior, close to Dhaka, on August 13.

The accident also killed Mishuk Munier, CEO of Bangladesh’s private ATN television news channel and three others, and injured Tareque’s film maker wife Catherine. The Masuds and team had been returning after scouting for locations for their next feature film, named Kagojer Ful (The Paper Flower). It was to be a prequel to his award-winning first full-length feature film, Matir Moina (English release title “The Clay Bird”).

That film, which tells the story of a young boy living at a madrasa or Islamic religious school, was inspired by his own childhood experiences. When it debuted at the Cannes Film Festival in 2002, it won him the International Critic’s Award as well as the FIPRESCI Prize for Directors’ Fortnight for “its authentic, moving and delicate portrayal of a country struggling for its democratic rights.”

Matir Moina was received with critical praise and toured the international circuit. However, the Bangladeshi Government initially refused to issue a censor certificate for national screening, saying it gave a distorted image of the madrasa system, and that it could hurt feelings in this Muslim-dominated country. Confronted by Tareque’s appeal and widespread international pressure, the decision was later reversed.

Matir Moina later became the first entry from Bangladesh in the best foreign language film category at the Oscar awards.

Tareque made several documentaries before venturing into feature film making. I first came to know his work through Muktir Gaan (The Song of Freedom, 78 mins, 1995), the most famous film in early age of his career.

In that documentary, the camera follows a music troupe during the Liberation War of Bangladesh in 1971. The members of the troupe sing songs to inspire freedom fighters. The film was made mainly based on the footage of American filmmaker Lear Levin that Masud got from the basement of Levin’s house in New York.

Muktir Gaan was an extraordinarily compelling film that was released theatrically in Bangladesh, blazing a new trail in distributing long-format documentaries in South Asia. It was also a strong entry at the inaugural edition of Film South Asia festival in Kathmandu, where I was on the jury. We awarded it a Jury Special Mention. 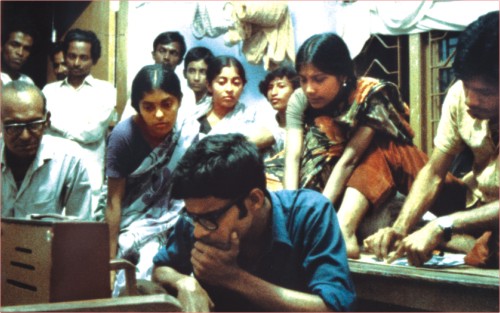 The Masuds followed it up with Muktir Kotha (The Story of Freedom, 82 mins, 1996), an oral history documentary about the experience of ordinary villagers during 1971 Liberation War. They also made many development related films through their Dhaka based production company, AudioVision.

I have fond memories of meeting Tareque and Catherine at the FSA festival. Our paths crossed at least a couple of times more in different corners of South Asia. Although we once discussed a collaborative project, it never happened due to the lack of funding.

As one film critic noted, “They were a delightful couple who managed to be deeply committed to the improvement of Bangladeshi society without ever being pompous or self-righteous.”

The Making of Matir Moina – Tareque and Catherine Masud