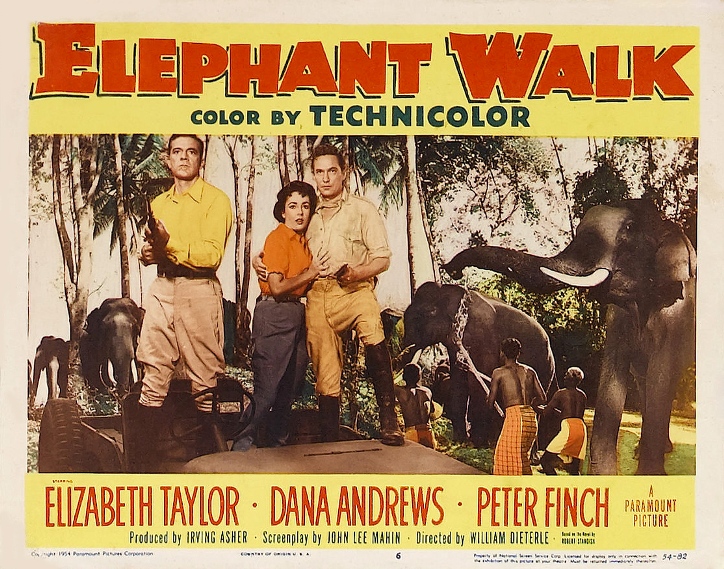 Elephant Walk: Another century, another island - but casting its shadow on us?

How can anyone review a film made nearly six decades ago — especially if its first release took place even before I was born? Well, there is only one way to find out – by just doing it.

I’ve just done it with Elephant Walk (103 mins, colour), released by Paramount Pictures in April 1954 — a dozen years before I was born on the same island (then Ceylon, now Sri Lanka) where the movie was set and filmed. In fact, this was among several that were shot on location in Ceylon in the 1950s when Hollywood studios ‘discovered’ the island as an exotic, relatively inexpensive and hassle-free location. But this is the only one whose story is actually set in Ceylon.

Elephant Walk was directed by William Dieterle, and based on the 1948 novel with the same title, written by “Robert Standish” — actually the pseudonym of English novelist Digby George Gerahty (1898-1981). It starred Elizabeth Taylor, Dana Andrews, Peter Finch and Abraham Sofaer.

“The movie has been remarkably prescient on several fronts, which can only be appreciated now — in another century, and on a wholly different island. A key theme of the movie was the human-elephant conflict, but passing references to social exclusion and rampant poverty in post-independent Ceylon are also of much interest.

“I doubt if Paramount’s writers were intentionally making any social commentary. One of the studio’s co-founders, Samuel Goldwyn, had famously cautioned against it. When asked about movies with a “message” some years earlier, he had replied, “If you want to send a message, use Western Union.”

“Nevertheless, the movie (and perhaps the book on which it is based, which I haven’t read) was contrasting the British planters’ opulent lifestyle with the forced austerity in post-War Britain. Even more striking is the poverty and squalor among the hundreds of resident workers whose sweat, toil — and occasional tears — ensured that the ‘cups that cheer’ were always brimming.”